Vladimir Nabokov’s choice of subject in his novel Lolita shocked readers, but that was essentially why he chose it. Beetz, states that Nabokov’s first inspiration for the novel came from a newspaper story about an ape “‘who after months of coaxing by a scientist, produced the first drawing ever charcoaled by an animal: this sketch showed the bars of the poor creature’s cage’ Nabokov said. As many critics have remarked Lolita is not about sex but about love.

Don't use plagiarized sources. Get your custom essay on
“ Lolita by Vladimir Nabokov ”
Get custom paper
NEW! smart matching with writer

Even more it is about obsession-and the destructive power it can hold over the lives of its victims.”(Beetz 2481) Also with out the shock value of Lolita’s risque subject of the “love story” between a man and his twelve year old step daughter, the book most likely would not have become as famous as it is. As Serafin states, Lolita became very popular underground after it was banned in Europe.

The taboo of it being banned mixed with Nabokov’s sparkling wit made Lolita a sensation.

(338) As Hart says in the 1950’s peoples attitudes towards sex were still very puritanical and conservative.(158) By exploiting the scandalousness of the violation of the last sexual taboo, the relationship between an adult and child, Nabokov was able to really show the extent of the power of infatuation, love and obsession. As Nabokov shows in his novel Humbert Humbert knows what he is doing to Lolita is wrong, but his burning desire for her drives him to violate his own morals. He even used morals to try and justify his actions, “The moral sense in mortals is the duty…We have to pay on mortal sense of beauty”(Nabokov 300)

Another quote in which Nabokov shows how Humbert’s obsession controls him is the following; “I felt proud of myself. I had stolen the honey of a spasm without impairing the morals of a minor. Absolutely no harm done.”(Nabokov 65) In this quote he is referring to “pleasuring him self” while near Lolita with out actually touching her.

The very nature of his actions show his desperation and it soon become apparent that Humbert’s twisted fantasies will not satiate his obsession for long and that he will act on it and “impair the morals of a minor”. By using the shock to readers of a relationship between an adult and a child, Nabokov successfully was able to show the extent of what obsession and love can drive a person to do. Humbert’s obsession lead him to ruin the lives of himself, Clare Quilty and the childhood of Lolita. Nabokov choose his taboo subject for Lolita to increase the impact of the character’s actions as driven by his own infatuation. 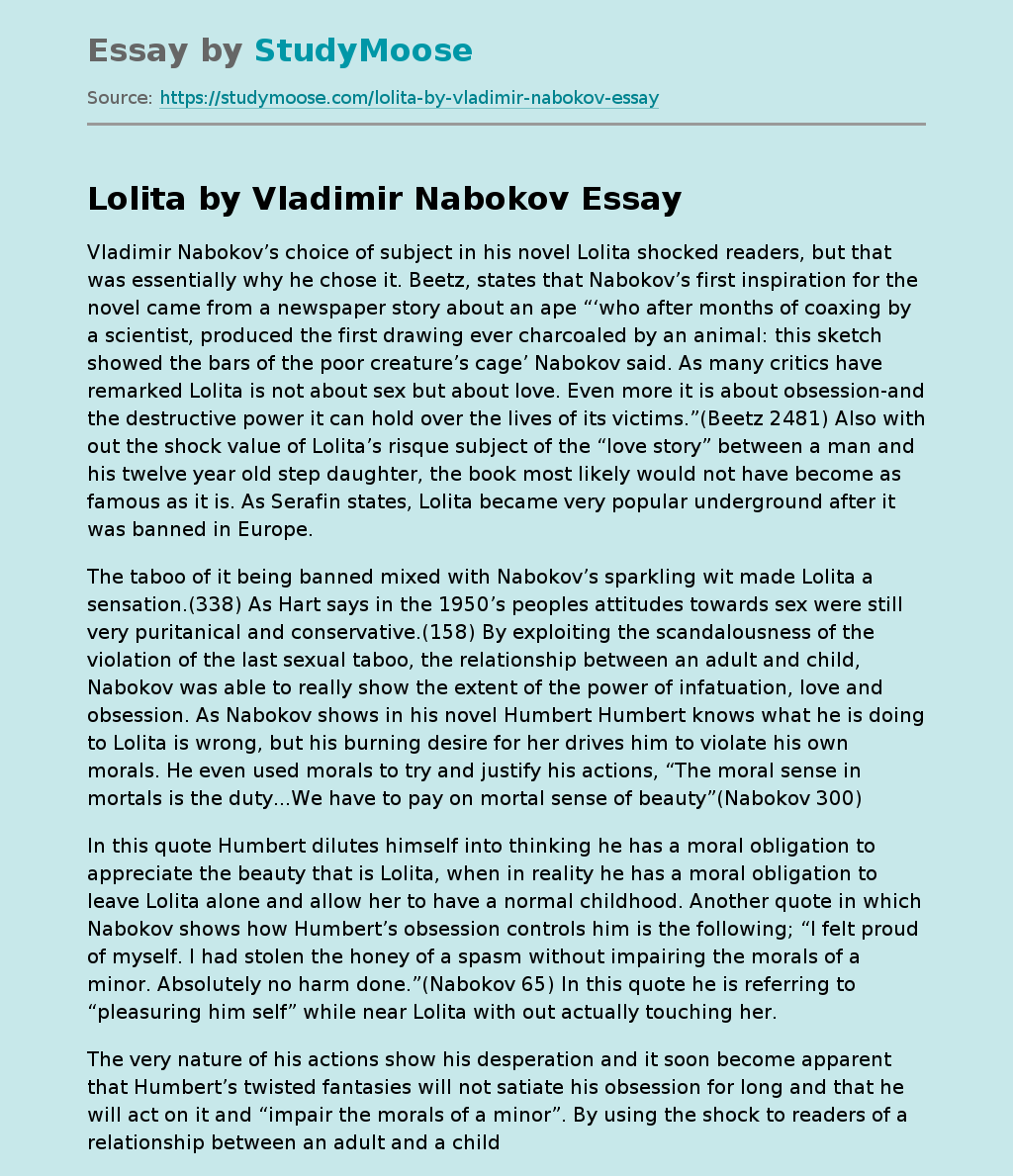