Decolonization and Influence of the Cold War

The decades following World War II were all centered on the concept of decolonization, the dismantlement of Imperial empires established prior to World War I throughout Africa and Asia. Due to the aftermath of World War II, countries around the world experienced massive independent movements whose objective was to eliminate colonization and form new independent nations. The process of decolonization was separated by three different approaches: civil war, negotiated independence through foreign pressure, and violent incomplete decolonization. China, for example, had its internal struggles with Nationalistic and Communist parties conflicting that caused a civil war between the two ideologies.

Don't use plagiarized sources. Get your custom essay on
“ Decolonization and Influence of the Cold War ”
Get custom paper
NEW! smart matching with writer

Countries including India and South Africa attempted decolonization through non-violent independence movements as well as peaceful negotiations for independence.

Though some countries independently sought for decolonization, it was inevitable that decolonization became intertwined with the politics and interventions of the Cold War. After World War II, the world was divided into two blocs, one dominated by the United States and one by the Soviet Union.

Because the United States and the Soviet Union couldn’t confront with one another directly in Europe, the two nations were strongly tempted to influence the process of decolonization through proxy nations in all parts of the world. Ultimately, the conflict between United States and Soviet Union disputed over decolonization of nations throughout the world including Korea, Cuba, and Indo-China (Vietnam).

Though the Cold War did not imply a great loss of life or substantial bloodshed, it is best described as a severe ideological conflict revolving around territorial expansion efforts.

Capitalism, which governed the United States economy and democracy, was the center of the United States government. On the opposite end, the Soviet Union adopted Communism, a predominant economic system that demanded extensive government control. The Cold War conflicts took effect as an indirect competition; a race to see which ideology would, in a sense, dominate the world. The East, represented by the Soviet Union and its Warsaw Pact allies, advocated the destruction of capitalism and the establishment of Communism throughout the world. Opposing them were the United States and its North American Treaty Organization (NATO) allies that attempted to contain Communist expansion efforts, defending its actions through the Truman Doctrine and the Domino Theory.

The Domino theory stated that if one nation fell to Communism, the neighboring nations would be affected and falls to Communism, eventually resulting in the inevitable spread of Communism throughout the world. One of the first nations that the United States and Soviet Union sought to establish control was in Korea. After 1949, when Chinese communist leader Mao Zedong proclaimed the establishment of the People’s Republic of China, the spread of communism began to target the country of Korea. Following the end of World War II, Korea was divided along the 38th parallel into “Soviet” North Korean and “American” South Korea occupation zones. Heavily armed with artillery and tanks, North Korean troops crossed and invaded South Korea on June 25th, 1950. Abiding to the containment of the Domino theory, United States immediately responded to the unprovoked attack.

Under the leadership of the supreme commander of the United Nations coalition forces, General Douglas MacArthur, the South Korean forces managed to push back the Communist forces back behind the 38th parallel. The duration of the Korean War lasted three years and an armistice agreement was signed on July 27th, 1953. The Korean War was an extremely costly war, both in causalities and in financial areas. Though the United States did halt the advancement of Communist takeover, the decolonization conflict in Korea was one of the most flagrant confrontations of the Cold War that intensified the brutal effect of opposing ideologies.

Another Cold War incident occurred not far from the United States soil. Up until the mid-20th century, Latin America had always kept good political relations with the United States. However, internal turmoil in Cuba and the rise of Fidel Castro resulted in the unorthodox alliance with the Soviet Union. In an attempt to terminate the Soviet Union influence in Cuba, President John F. Kennedy sent a team of 1,500 CIA-trained Cuban exiles but was quickly defeated by Castro’s army. The “Bay of Pigs” incident was not the only confrontation between Cuba and United States; the Cuban Missile Crisis in October 22, 1962was the peak of nuclear arms war of the Cold War era. Prior to a CIA spy plane discovering missile sites on Cuba, the Soviet Union was secretly supplying building material and missiles to Cuban military bases.

With the options of a full scale invasion of Cuba, a massive air strike, or a naval blockade, the Kennedy administration had to quickly decide on what course of action to take. Eight days passed and the catastrophe was averted when President Kennedy instituted a naval blockade to prevent Soviet ships to reach Cuba. President Kennedy and Soviet Union’s Nikita Khrushchev reached in agreement as the Soviet Union removed their missiles from Cuba and the United States agreed not to attack Cuba. The conflict in Cuba not only characterizes the alarming intensity of the Soviet Union and the United States but also solidifies the importance of the influence the countries had in the matters of decolonization.

One of the final and longest conflicts of decolonization was in Vietnam. The struggle for Vietnam between Communists and Western nations lasted from 1945 to 1975. In the previous century, Vietnam had been colonized by France. With encouragement and support from Stalin and Mao Zedong, Vietnamese Communists successfully rose against the French. At the start of what was known as the First Indochina War, the French government asked the United States for support against the Vietnamese Communists but the United States government did not initially grant support to the French to avoid heightened discrepancies with the Soviet Union. The Geneva Conference peace terms between France and delegates from Vietnam agreed to a partition, separating Vietnam at the 17th parallel (much like the boundary parameters set in Korea). Believing that the Geneva treaty granted too much authority to the Vietnamese Communists, the United States supported the creation of a counter-communist alternative south of the 17th parallel. The establishment of the Southeast Asian Treaty Organization (SEATO) brought about a United States supported government in South Vietnam.

In an attempt to reunify Vietnam under Communist rule, the Communists created a unified front to help mobilize southerners in opposition of Ngo Ding Diem, leader of South Vietnamese government. It was known as the National Liberation Front but became known by the Americans as the “Viet Cong.” The Viet Cong operated as a guerilla force and eventually overthrew Diem’s government and had him assassinated. In effort to regain Saigon, capital of Vietnam, and halt the complete takeover of Communism in Vietnam, President Lyndon Johnson escalated war efforts by utilizing more manpower and firepower. Despite the heavy losses on the Viet Cong and North Vietnamese forces, the war was tiring on both sides and was dragging out. President Nixon managed to end hostilities between the United States and North Vietnam with the Paris Peace Agreement in January 23rd 1975. Although the peace terms were final, the South Vietnamese government continued to battle the Communist forces. With the support of Soviet Union, the Communist forces managed to take Saigon in April 30th 1975. The effects of the Vietnam War were devastating on both parties. The end of the Vietnam War realized the consequences of a confrontation between the East and the West. The Soviet Union managed to exert their Communist influence in the end but the end result of the war manages to signal the end of Cold War influences on decolonization.

The era following the end result of World War II ushered in a time of decolonization throughout the world. Through peaceful negotiations or violent civil wars, independent nations became to form by breaking away from their respective Imperialist countries. However, at the same time, the decades also promoted the conflict between the Soviet Union and the United States. The conflicting ideologies of Capitalism and Communism served as a major role in the Cold War. With disputes over countries such as Korea, Cuba, and Vietnam, it became apparent that the politics of the Cold War contributed to the decolonization process across the globe.

Decolonization and Influence of the Cold War. (2016, Mar 02). Retrieved from https://studymoose.com/decolonization-and-influence-of-the-cold-war-essay 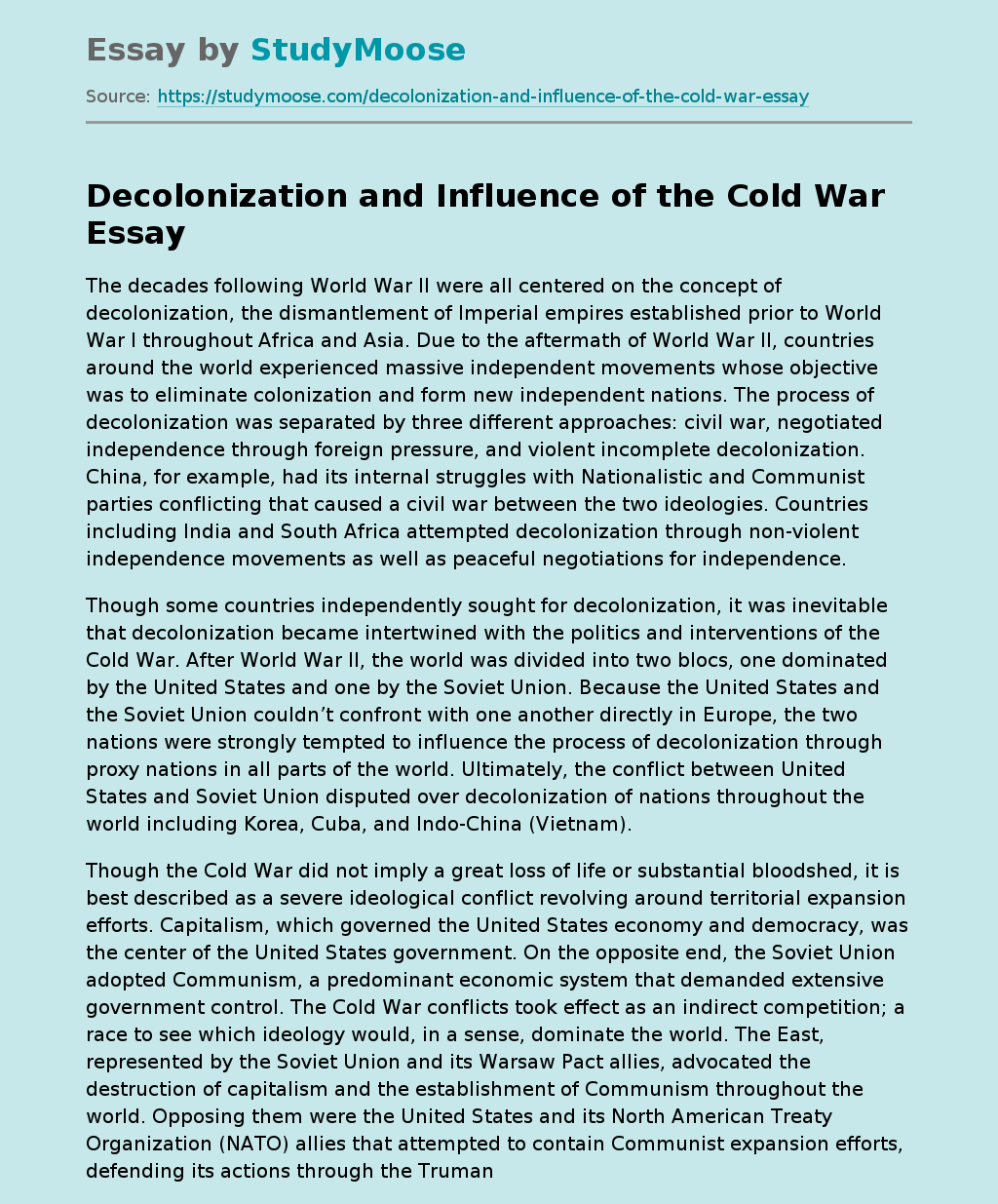