In the two decades prior to the Revolution, the Americans built up a series of grievances against the British government. Those complaints were clearly articulated in the Declaration of Independence. The colonists did this to prove to every other country in the worlds that their reason for war was justified. It is also important to keep in mind that when Thomas Jefferson wrote this, he did not mean for it to be a historical text, he wrote it as a persuasive essay to gain support from other European countries.

Don't use plagiarized sources.
Get Your Custom Essay on Declaration of Independence DBQ Just from $13,9/Page

So the fact that some of the grievances listed may be fabricated or altercated, is only natural if you want to gain allies, and make your parent country look bad. The colonists didn’t want to quietly separate form the British; they wanted to make a statement. Although some of the charges leveled against the king in the Declaration aren’t valid, the majority of the charges, including those about trade, economics, political influence, and domestic feuding, were very much valid charges.

The grievance in the Declaration of independence that specifically addresses the commerce problem within the colonies states that Britain “cut off all trade with other parts of the world,” except them. We can clearly see this statement is a valid grievance, because if we examine the numerical statistics of imports and exports of Britain in the years of 1763-1775, we can clearly see a disturbing pattern. In Britain’s trade with the colonies the colonists received about ¼ of what they exported, back in imports (Document B). This unbalance is a big gap that identifies the underlying issue of monopolization, which the British had over the colonies. The Colonists couldn’t possibly have traded with any other country anyways because they had no money. The Grievance in the Declaration of independence that addresses international trade is in fact a valid grievance.

The grievance in the Declaration of independence that comments on the unjust taxes that existed within the colonies, stated that Britain “imposed taxes without are consent.” There were several Tax legislations that The British parliament created for the colonies, without the colonies consent. Examples of these taxes include: the Sugar Act (1764), the Currency Act (1764), the Stamp Act (1765), the Townshed acts (1766), and the Tea Act (1773). These Acts along with others laid the foundation for unrest and high tension within the colonies, towards Britain.

Benjamin Franklin outlined the specifics of the taxation of the colonists, before the House of Commons, with his statement, “An External Tax is a duty laid on the commodities imported…, if the people don’t like it, they can refuse it, and are not obliged to pay. But an internal tax is one forced from the people without their consent” (document C). Ben Franklin being an intellectual himself could have provided an educated and relatively impartial statement. Britain mainly used internal taxes to extract wealth form the colonists, and thus seemed more unjust, as the whole process was by way of force. This created further resentment within the colonies and was a major cause of the American Revolution. The Grievance that discusses the taxation of the colonists, by the British was very much a valid Statement.

The grievances that discuss the political oppression of the colonists to pass their own laws stated that, “the House of Representatives was dissolved repeatedly for opposing ideals of the king,” regarding what’s best for the colonists. The Most important and influential political entity in the colonies at this time was the town meeting. At town meetings people could voice their opinions on important problems that were occurring at that moment, and the People could set up a law or act, that would provide immediate help, or relief to the problem at hand.

Britain thus enacted a governmental act, that restricted the power of these meetings, and that no meeting could be conducted without the governor, which often times was a voice of the King (Document D). This way the colonists couldn’t pass any law without partial king consent and now law would get passed that didn’t benefit the crown. This in turn caused the colonists to be unable to defend themselves, against any immediate threat to the colonies. As a result, the grievance listed in the Declaration was a valid statement that was an important aspect of the declaration.

The grievance in the Declaration of Independence concerning domestic feuding with the Indians states that the crown has, “excited domestic insurrections amongst us…to bring on the merciless Indian savages.” This defines an important grievance that was not only outlined in the declaration of independence, but also was made a point in Thomas Paine’s Common Sense. The British would only aid to colonies in battles with the Indians, which they could have possibly benefited from. This meant that the British were looking to gain land, money, or both.

Any other fight between the colonists and the Indians they did not see beneficial to the crown, they would let the colonists themselves deal with the problem, and thus the colonies were always in a state of fear. Britain also would instigate fights with the Indians and the colonists, so that the colonists would be even more dependent on Britain, and thus would have no reason to revolt. This point is made clear in the Paxton Boys petition to the Provincial council. Which states that, “Under the mask of friendship, have procured themselves to be takes under protection of the government (English),…and are now maintained at the public expense” (Document A). The British effectively used the Indians as a weapon against the colonists. Thus putting this grievance in the Declaration is very mush a valid action.

The Declaration of Independence was created in order to establish a persuasive and convincing reason to break away from Britain. Within the Declaration is the List of grievances which specifically cite examples of the oppressive and tyrannical rule of the British. Some of these grievances aren’t valid statements including one specific grievance that discusses Britain’s role in the decimation of the colonies coasts, town, and lives of their people. However for the most part the grievances are valid statements that help outline the colonist’s base for starting a war. 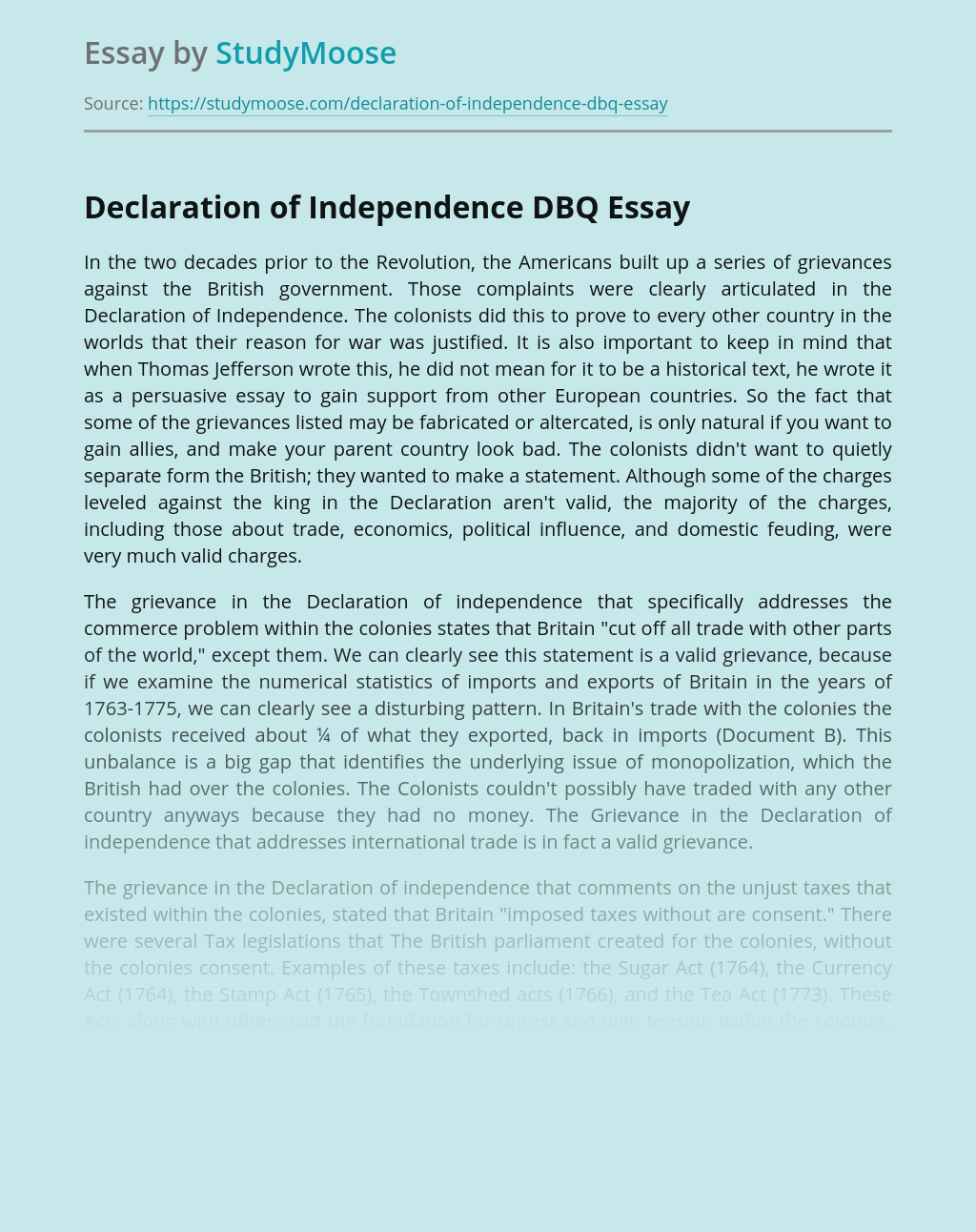 The Role of Csr in Cosmetic Industry

Chapter 1: Introduction 1 Introduction In this chapter, background information of the importance of CSR, especially for the cosmetics industry is revealed. In addition, the purpose and the scope of this paper are to be described too. Lastly, an overview of this paper structure is shown. 1.1 Background of the study Nowadays, CSR has become...

The Colosseum and Gladiators

While the Colosseum is a major tourist attraction today, back when the Roman Empire ruled it was a place of fighting, blood, and death. The colosseum was a source of entertainment for the people of Rome, as they witnessed the famed gladiators fighting to the death. The architectural design of the colosseum is an ingenious...

Private Analysis Paper There are lots of aspects that influence and direct the registered nurse (Registered Nurse) in her everyday nursing practice. These elements consist of state laws, professional requirements and duties, and personal belief systems and values. All factors collaborate to supply proficient, safe, and quality take care of society as a whole. It...

Exploring the Ethical Issues in the movie MY SISTER'S

APPLICATION OF ETHICAL THEORIES: Virtue ethics: A right act is the action a virtuous person would do in the same circumstances.Virtue ethics is based on person rather than action. Looks at the virtue or ethical character of the person carrying out an action, rather than at ethical duties and rules, or the consequences of particular...

Know the legislative and policy framework for health and safety. Describe how current health and safety legislation, policies and procedures are implemented in your setting At the start of the day the children are made to line up in the school playground. When the whistle is blown at 8.55a.m the teachers will come onto the...