Death Of A Salesman The American Dream English Literature

Arthur Millers “Death of a Salesman” is considered to be a literary work of genius, transcending from 1949 and even today the morals and dreams of American life. True to this day, the “American Dream” is a concept that is sought after by men and women all over the world, depicting that the ideas and concepts that Arthur Miller had in the 1900’s are never changing.

“Willy Lomanâ€¦ is seeking for a kind of ecstasy in life, which the machine-civilization deprives people of.

Don't use plagiarized sources. Get your custom essay on
“ Death Of A Salesman The American Dream English Literature ”
Get custom paper
NEW! smart matching with writer

He’s looking for his selfhood, for his immortal soul, so to speak” (Roudane 30), explains Arthur Miller in an interview with Phillip Gelb. From the very beginning of the play, we witness that Willy, currently 63, is obsessed and fascinated by the American Dream; as seen from the flashbacks and implementation of characters from his past, he is able to picture how much better life should and can be. He and his family lived in a nice house with trees, drove a red “Chevvy” (Miller 19), and his sons were both something to be proud of.

Back “when refrigerators were made to last, there was air to breathe in your own backyard, and the people with whom you did business actually knew you” (Bloom 37).

Miller illustrates the reason why Willy’s vision of the American Dream fails, illustrating that the personal relationships and impressions you have with others do not promise financial accomplishments. This is shown to comment on the nature of American society and how it is changing, becoming unstable.

Flashing back, Willy explains to his sons how to be successful in America, according to his ideals. “Because the man who makes an appearance in the business world, the man who creates personal interest, is the man who gets ahead. Be liked and you will never want. You take me, for instance. I never have to wait in line to see a buyer. Willy Loman is here!” That’s all they have to know, and I go right through” (Miller 33).

To himself, in his early days Willy has reached the pinnacle of the American Dream because he is well liked and personally takes an interest in his business. However, he is mocked by his fellow salesmen behind his back, rejected by his customers, and all of a sudden, his material world starts to collapse underneath his feet. The unsteadiness in Willy’s personal life reflects the instability of the larger society he was born into, because in Willy’s society, having a solid identity means being wealthy and having material possessions – Willy not fitting in. Still, Willy’s equation of success with personal relationships seems to fail him, as people do not “take” to him. Miller purposely has Willy’s customers not like him in order to mention the increasing machine-based development of American society. His world is one where professional relationships have broken down and allowed material things to overcome those relationships. Willy himself, notes that his successful neighbor Charley is “a man of few words, and they respect him” (Miller 37), revealing Miller’s view that economic success is conditional to one’s control of humanity. Loman’s helplessness to ultimately grasp reality, demonstrated through the absence of the product that he sells, not only reflects his financial and personal instability, but also the instability of the greater American society. This constitutes why the American Dream is continuously shifting and is a vague idea, at best. Willy’s failed American Dream conveys a dark and dull future of American society, where success is associated with objects and a sense of the material; human interaction and relationships are no longer prized.

From the beginning of Willy’s life he is faced with abandonment and betrayal. At a young age his father left, leaving both him and his older brother, Ben, behind. From the beginning of Willy’s life, he is left alone with nothing of monetary value or that of a legacy. Shortly thereafter Ben leaves and travels to Alaska, allowing Willy to lose himself, first the first time, in a distorted view of the American Dream. Because of these abandonment experiences that Willy experiences so early in life, he develops a fear of it – turning him and his family to ultimately try and conform to the concept of the American Dream. When Biff, Willy’s eldest son, leaves home and never writes where he is or what he is doing, making Willy believe he’s been betrayed. Throughout Biff’s childhood Willy was very supportive of him and his own dreams; dreams to become a football star – to make something of himself. Biffs prolonged absence and impromptu returns seem to shatter the Dream for Willy multiple times. All the time, Biff is back home he is trying to “find himself” (Miller 16). Willy believes that Biff is on to something great when he goes to speak with Mr. Oliver, but his hope is ultimately shattered by Biff who along with Happy, abandons their mislead father in the restroom (Miller #).

A sense of abandonment and betrayal is seen from Linda, Willy’s wife, while Willy is out chasing the American dream (Miller 12-15). While Willy travels, primarily throughout the northeastern United States, Linda is at home, alone to raise the boys. Years later when the boys grow into men and move out, Linda is left, abandoned in her own home, again. As we read through the play, Willy seems to make mention that life on the road is lonely. In order to assist and alleviate with Willy’s loneliness, he has an affair with a young woman from one of his client’s offices. At some stage in this affair, when Willy and this woman are meeting in a Boston hotel, Biff surprises his father with a visit, only to realize that his father, Willy, is a fake (Miller #). It is at this point where Biff becomes distant and ashamed of his father, leaving his father no longer a hero. Witnessing his so called role model fall from the pedestal he once held him on, Biff begins to drift – leaving home and drifting from one job to the next, beginning to rebel against anyone with authority. Linking and proving that living within the American Dream has its consequences. In act one, Willy is talking to Linda about how once you pay a house off, no one lives in it, yet in the end of the play, during the requiem at Willy’s funeral, Linda says “I made the last payment on the house today. Today, dear. And there’ll be nobody home” (Miller 139). Attempting to live up to the standards that Willy put himself and his family up to, he never gets to reap the benefits of all the hard labor that paid the house off, yet again abandoning and betraying his wife, Linda.

In order to showcase how America has and is being permeated by such a capitalistic and material-crazed society, Miller illustrates, through Biff, that in order to achieve any level of success, someone must devote their entire livelihood to being only mediocre. The illustration of Biff’s failure to achieve his dream of living on and owning a ranch indicates not just his economic failure, but additionally the transfer of freedom to a capitalistic mentality. Miller demonstrates that the ever-changing American Dream is harmful because it continues to inflate dreams to a larger size, therefore deeming those dreams unattainable.

By showing us the failed dreams and visions of both Biff and Willy, Miller is opening our eyes to the unsteadiness of the American society because they associate success with material possessions. He ultimately makes it clear that in American culture it is extremely hard to separate the identity and the material in one’s life.

Death Of A Salesman The American Dream English Literature. (2019, Aug 19). Retrieved from http://studymoose.com/death-of-a-salesman-the-american-dream-english-literature-essay 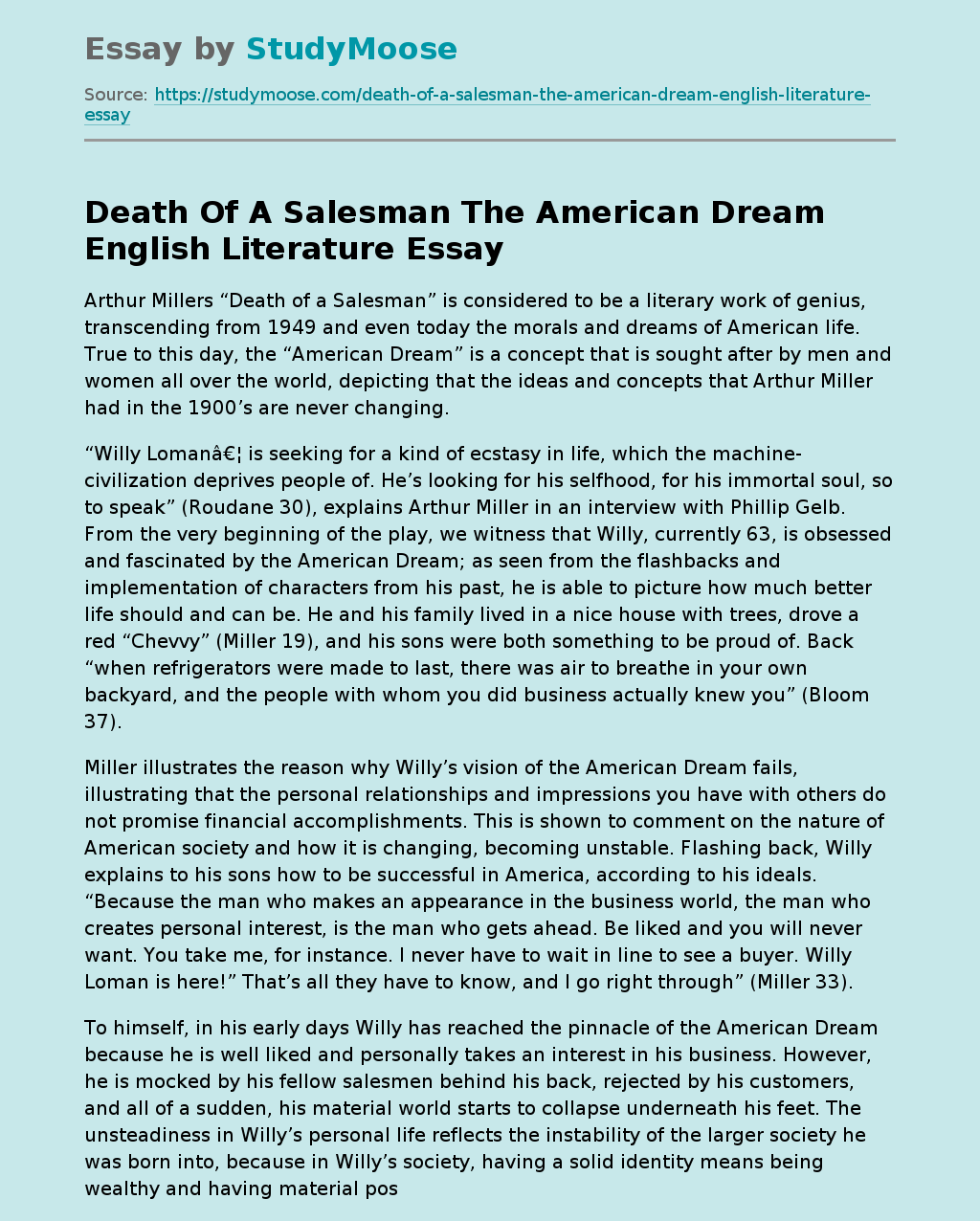