"Death of a Salesman" by Arthur Miller Character Analysis

“Willy Loman is in many ways foolish and objectionable, and yet he still commands our sympathy and even our respect.” How far do you share this view of Willy Loman? In your response, you should consider how an actor might interpret the role of Willy. Willy Loman is the main character of “Death of a Salesman” by Arthur Miller. The play focuses on the last twenty four hours of his life.

Don't use plagiarized sources. Get your custom essay on
“ “Death of a Salesman” by Arthur Miller Character Analysis ”
Get custom paper
NEW! smart matching with writer

Willy Loman always believed in the “American Dream”, but his character is now “old and tired”. We can see both sides of Willy’s character. The first is how he is foolish and objectionable. The second is how he can command our sympathy and respect. This can make him a figure of pathos. I will be addressing these points in this essay. In addition, I will be exploring how an actor would be able to interpret Willy’s character.

Willy Loman can in many ways appear foolish and objectionable. Willy Loman contradicts himself in many ways. He has a very aggressive attitude towards his family, especially towards his wife Linda. It is as if they are a soundboard for Willy’s problems and frustrations. Although he displays this behaviour towards the other characters, he shows deep compassion towards his family. We see other examples of this aspect of his character.

He sees himself living the “American Dream”, by exaggerating to everyone of how well he can “sell” his products.

The irony of his job is that we never find out what he actually sells. This then makes us have more questions than answers after we have finished reading the play. He likes to contradict himself, by one minute saying how Biff is “lazy”; however, he then says Biff is not lazy. This then makes us wonder what the relationship is between Willy and Biff, and if anything has happened to sabotage this.

We get introduced to two characters, Willy’s two sons Biff and Happy. Willy has tried to shape both of their lives, but this has not gone well. We see the first mobile concurrency in the play. This was when both of his children were young. When Biff was young, Willy paid complete attention to Biff, helping him with his football career. Happy however, was trying to be “notice[d]” by Willy. This can make Willy seems foolish, he even encourages and “congratulates” him when Biff steals a “new football” to help his “passing”. It is as if Willy would encourage Biff, but for all of the wrong reasons.

This and other events then makes Biff known as a kleptomaniac, that we see glimpses of throughout the play. Happy is trying to get Willy to “notice” him, through various ways. However, Willy literally ignores him, what can be signs of neglect. Willy feels deluded, by making himself “bigger” than most people, even if they try to help him physically and financially. Biff then gets a visit from his friend Bernard. Bernard is not as strong or tall as Biff, but Willy likes to use him to help Biff with his studies. He likes to call Bernard “anaemic” and a “pest”. Although at this point, Bernard looks as if he is going nowhere, he turns out to be somewhere in his life unlike Biff and Happy.

He then gets back to reality, although he stills has a deluded mind. He tries to tell Linda how he made a large amount of wealth when he was working in Providence. However, he has to come closer to the truth when he lowers the value of how much he earned. He finally tells the truth, when he talks about “business” not picking up. This shows us how objectionable he can be, even though he knows what the truth is. Linda then gets some stockings to darn. We get taken back into another flashback. We discover how Willy had an affair with a colleague when he went on a business trip. He then feels guilty, because he gave Linda’s present of stockings to “The Women”.

We see how the two time switches collide together, when he says how he will “make [it] up” to Linda, and he can hear the women laughing in the background. Although we know that all of the acts that he has done are all out of foolishness, we can feel some sympathy towards Willy, for he is not finding it easy to cope with this pressure. We then find out that this is the reason why Biff and Willy have not had a good relationship. Biff then de-railed off his education, and then found no point in life. He did not look up to Willy as a role-model anymore. If you had to look at this aspect from an actor’s point of view, you can imagine him being played by someone who likes to over-exaggerate all of his lines. However, we can also imagine him being very tired in his speech in some parts, and always holding his head, like he is on the verge of a mental breakdown.

Willy Loman can have another aspect to his character, which is how he can command our sympathy and even our respect. Willy has tried several times to try and commit suicide, always saying how he works himself to “death” and emphasises the word “kill”. This then makes us want to make him a figure of pathos and does he have the power to command our sympathy. We are then able to answer this question, by how he is acting throughout just the first act. This is shown when we see how he is trying to make a living for him and his family, yet he can not make the cut. Linda, his wife has got a naï¿½ve aspect towards her, and this is shown when she makes a compassionate speech about Willy.

She talks about him not being the “finest character” ever lived. This shows us that she knows he has got impurities in his character. She even imitates Willy’s earlier speech, by how “attention must be finally paid” to him. This shows that she still will support him, no matter what he has done in the past. These events happen throughout the play, until unfortunately he finally commits suicide. If an actor had to interpret this role, we can say how Willy would be very quick with some parts of his speech, but when he does monologues, he would be very slow and express his speech very well. In conclusion, Willy is able to do be foolish and objectionable in some aspects, but can become a figure of pathos by making us feel sympathy towards him, and show him respect towards him. These events are very unfortunate, and we hope that this does not happen to us the audience in reality.

"Death of a Salesman" by Arthur Miller Character Analysis. (2017, Oct 06). Retrieved from https://studymoose.com/death-of-a-salesman-by-arthur-miller-character-analysis-essay 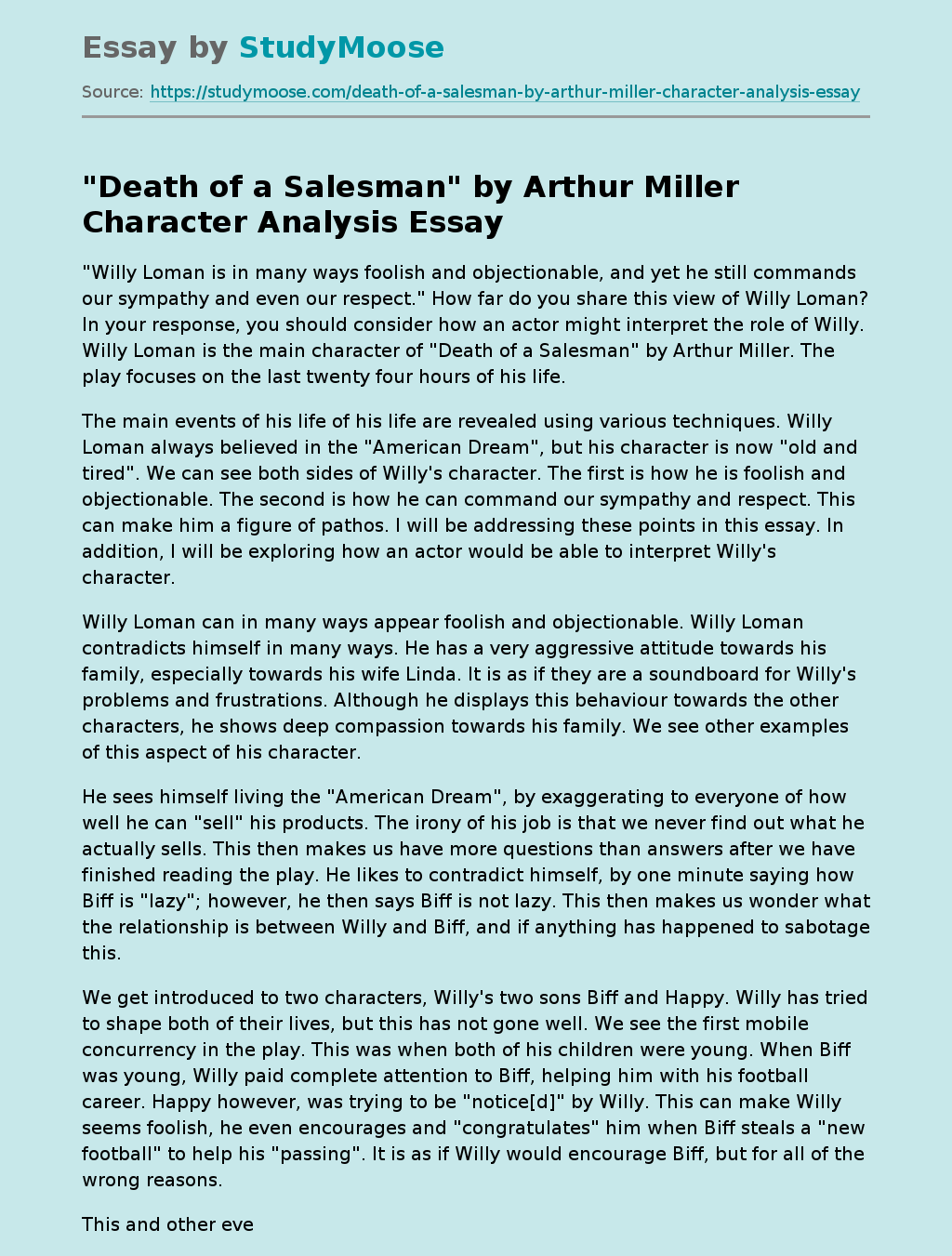