Death of a Salesman Idealism and Truth

?Idealism describes the belief or pursuit of a perfect vision often based upon unrealistic principles. This pursuit is often contrasted and opposed by truth. The truth and reality in an individual’s life is what enables this person to remain grounded and down to earth. An individual must set themselves high expectations in order to be their best, but they must also acknowledge the fact that everything they desire is not achievable. The imbalance of idealism and truth in an individual’s life can have calamitous effects.

Don't use plagiarized sources. Get your custom essay on
“ Death of a Salesman Idealism and Truth ”
Get custom paper
NEW! smart matching with writer

It is significant in an individual’s life because it can lead to the deterioration of an individual’s sanity, destruction of family relationships and ultimately death. This is exemplified in Death of a Salesman by Arthur Miller, by Willy Loman. Willy spends his whole life pursuing the American Dream. This pursuit leaves him in debt and lacking less than a sliver of sanity. This man lacks the capacity to face the truth; the reality of his situation.

The negative effect that his dream has on his family and life is simply overlooked and ignored.

As Willy’s life swerves out of control, he tumbles deeper into the abyss of his idealism, to a point of no return. The inability for an individual to achieve a single-minded dream can lead to the deterioration of their sanity. In Willy’s case, he has spent his whole life pursuing the American Dream; a dream that is impossible to achieve. His inability to cope with the failure of his life at first simply causes him to feel lost, but eventually causes him to go insane.

Ironically enough this man, so set on having the perfect life, has an affair with a secretary of one of the buyer.

This is simply a financial transaction of gifts for sex and access to the buyers. Willy does this to escape the truth of his life, and in the process completely contradicts his goals. In an attempt to protect himself from the reality of his life, he goes into self-protection mode. His own mind morphs his memories to achieve and establish his desires. Willy’s constant flashbacks lay the groundwork to support that he is becoming senile and that his idealistic tendencies caused him to lose the ability to recognize reality from illusion.

Willy is a very insecure individual, and he tries to make himself look better by lying to himself and his family. In his world of delusion, Willy is a hugely successful man. He disguises his profound anxiety and self-doubt with extreme arrogance. Biff nails it on the head when he points out the fact that Willy “had all the wrong dreams. All, all, wrong. ” The overpowering pursuit of idealism over truth can lead an individual to lack the ability to cope with reality. Willy has a lot of potential, but he also has a whopping case of self-deception paired with misguided life goals.

He has based his whole life on supporting others and does not know how to live any other way. The effect of lacking a manly figure during his youthful development is substantial effect in how Willy raises his own sons. In Willy’s pursuit of the American Dream, he clearly instills in his sons that being well-liked is more important than character. By emphasizing likability as being the most desirable quality for success he places a higher premium on outward projection over inner strength of character. He simply passes on these unrealistic qualities to his sons.

“I never in my life told him anything but decent things. ” Willy’s memories reveal that the values with which he raised his sons has made Biff comes to consider himself exceptional and entitled to whatever he wants regardless of how hard he works or whether it harms others. Biff’s perfect illusion is shattered when he discovers that his father is having an affair and he feels hateful and confused about his father’s actions. His excessive pursuit of idealism shatters Willy’s relationship with his son; this is something that he does not have the ability to repair.

Willy’s pursuit of idealism in his life was extremely unrealistic and eventually prevented him from having the ability to see the truth in life. He spent his whole life trying to provide for his family. He wanted the life of a salesman. To be well-liked and have a massive funeral when he dies. The reality is that he spent his whole life pursuing unrealistic dreams based on negative personal values. Willy himself points out that he’s “worth more dead than alive. ” It’s quite tragic that Willy believes he has to kill himself to feel that he is worth something to his family.

The reality of the situation is that his death is in vain. The Loman’s only had one more payment left on the house, and don’t actually need the money anymore. But in his blinded illusion, Willy cannot see through or cope with his failure. This causes him to believe that he is worth nothing more alive and kills himself to enable his family to collect his life insurance money. The unevenness of idealism and truth in an individual’s life can lead to the loss of sanity, deterioration of relationships and even death.

By having a good balanced of idealism and truth, there is a greater potential that an individual will discover contentment in life. While pursuing an ideal, an individual may be confronted with truth that must be recognized, and if ignored will have cataclysmic effect. Idealism provides a good source of motivation to strive for excellence and truth reminds us that we are all flawed. Together, with an appropriate balance of both, you have the tools to live a life happy.

Death of a Salesman Idealism and Truth. (2016, Jul 21). Retrieved from http://studymoose.com/death-of-a-salesman-idealism-and-truth-essay 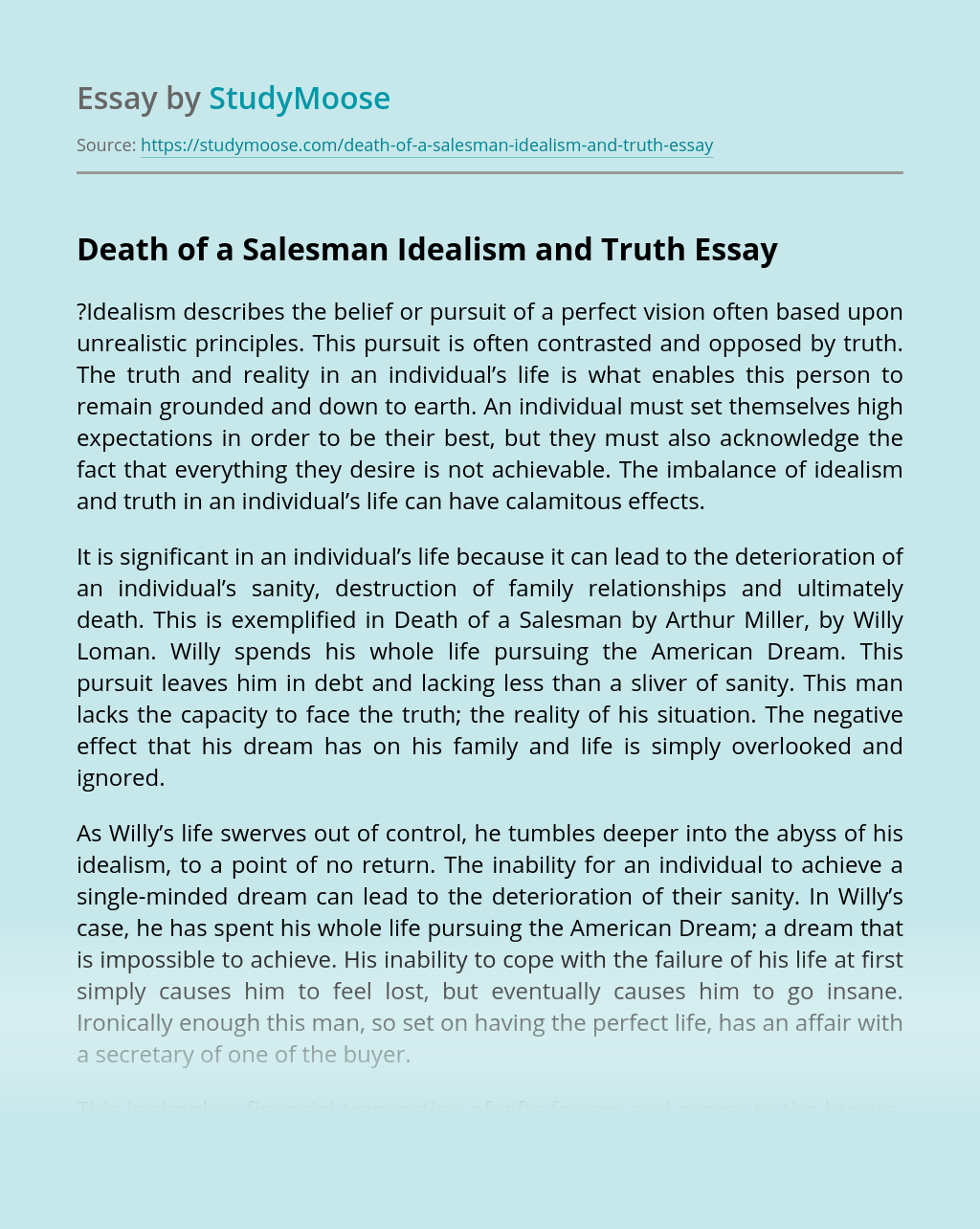