Death of a salesman --- character of Willy Loman and his relation with his wife, sons, friends and his extra marital affair

Modern playwrights have continued to create characters whose tragic flaws lead to tragedy, but these are not usually heroes in the classical sense. Arthur Miller’s “Death of a Salesman,” for example, tells the story of a man whose character’s defect leads to tragedy and the suffering of others. Death of a Salesman, is a gripping drama written by Arthur Miller, illustrating the suffering and hardships experienced by an ordinary 60-year old salesman who is on an unusual journey to achieve the American dream.

Don't use plagiarized sources. Get your custom essay on
“ Death of a salesman — character of Willy Loman and his relation with his wife, sons, friends and his extra marital affair ”
Get custom paper
NEW! smart matching with writer

Similar to the numerous early American dramas, the main character has a dream of attaining prosperity and status in his community.

Willy Loman is an ordinary salesman who believes he will one day be a successful salesman. Because of Willy’s frail mind, the old salesman sometimes doesn’t know if he is living in the realm of today or yesterday. He berates his sons and cheats on his wife. When he loses his job at sixty-three, he commits suicide.

The drama unveils the emotional breakdown suffered by the play’s tragic hero, Willy Loman, at the dramatic moment when he realizes the only way he would be able to support his family was to commit suicide so they could obtain his life insurance money. Willy Loman possesses neither great stature nor great virtue.

He does not become aware of his character flaws. Therefore, he does not meet the classic Aristotelian definition of a tragic hero. However, his downfall is a result of his inability to be honest with himself, which is a character flaw.

Miller in this wanted to show that in a modern democratic society, heroes do not have to be kings or nobleman and that the downfall of an average man is just as tragic as any other. No one has a perfect life. Everyone has conflicts that they must face sooner or later. The ways in which one deals with these personal conflicts can differ as much as the people themselves.

Some insist on ignoring the problem as long as possible as is the case with our hero, while some attack the problem to get it out of the way. This technique of Willy Loman in Arthur Miller’s play Death of a Salesman, leads to very severe consequences. He never really does anything to help the situation, he just escapes into the past, whether intentionally or not, to happier times were problems were scarce. He uses this escape as if it were a narcotic, and as the play progresses, the reader learns that it can be a dangerous drug, because of it’s addictiveness and it’s deadliness.

After failing to deal adequately with his feelings, he escapes into a time when things were better for his family. It is not uncommon for one to think of better times at low points in their life in order to cheer themselves up so that they are able to deal with the problems they encounter, but Willy Lowman takes it one stepfurther. His refusal to accept reality is so strong that in his mind he is transported back in time to relive one of the happier days . A time when no one argued,he and his were younger, the financial situation was less of a burden, and his sons enthusiastically welcomed him back home from a long road trip.

Willy is not good with people, he is good with his hands,he is not a good salesman and he chooses the wrong career. Willy often makes up stories or changes the stories he knows because he cannot face the truth of his life that he has not accomplished as much as he has planned. Willy’s downfall is his own doing which is brought about by his unrealistic dreams, his pride ,his career choice and his failure to manage life’s problems. Willy, at a young age, noticed an old salesman who worked at an age of 80 and made a lot of money.

The old salesman took orders from no one, he made his own orders and everyone did as the old man said. When the old salesman, Dave Singleman dies, all the buyers came to his funeral. All the people Dave ever knew came. There were thousands mourning his death. From that point, Willy Loman found an awesome dream which he followed the rest of his life. Willy became a salesman in spite of being the most unqualified salesman ever! He never sold a thing. Willy stops seeing the truth at one point of his life and he relies on his own lies to numb his pain. The pain of knowing he cannot and will not be able to become Dave Singleman.

He is Willy Loman, who is good at fixing the house. He is not cut out for travelling from city to city and selling goods to people he has never met before. Willy dramatically dies living out his dream, the dream that never suited Willy Loman. Willy does not allow people to tell him what to do. He believes that he cannot be bossed around and that he is too important to fall under anyone’s authority but his own. Willy’s relationship with his wife is clearly a cause of his collapse. Willy neglects to demonstrate honesty in his relationship with his wife.

The reader is told of Willy’s past and how on business trips he would deceivingly find himself a woman to spend the night with. When Willy is no longer able to make a living he borrows money from his friend, Charley, and claims that it is money that he had made. As Willy’s condition slowly deteriorates, he sets up tubing, which he plans to hook up in a fashion with intent of suicide. He neglects to tell Linda how he feels. Due to Willy’s lack of honesty with Linda, she too is not honest with him. She is aware that Willy is borrowing money from a friend, but doesn’t say anything about it.

After Willy is unable to complete a drive to New England, due to his obviously deteriorating condition, Linda avoids reality and makes excuses for Willy. Linda always puts Willy on a pedestal and refuses to see any fault in him. Willy teaches Biff and Happy not to take orders from anyone. He thinks this will make Biff, Happy and himself successful, but he is once again wrong and suffers in his life because of that. As a father Willy fails, he is not a good father for many reasons. First and foremost, he makes his occupation his number one priority.

For years, he travelled for his business so frequently that he never got the opportunity to truly get to know his own sons. As a result, he could not give them both his love and time as a father. Biff catches his father with the women he is in love with, this not only breaks his heart but he can never trust his father again. As a father, Willy Loman offers his sons terrible advice. For example, this is what the old salesman tells teenage Biff about women: WILLY: Just wanna be careful with those girls, Biff, that’s all. Don’t make any promises. No promises of any kind. Because a girl, y’know, they always believe what you tell ’em.

Death of a salesman --- character of Willy Loman and his relation with his wife, sons, friends and his extra marital affair. (2020, Jun 01). Retrieved from https://studymoose.com/death-salesman-character-willy-loman-relation-wife-sons-friends-extra-marital-affair-new-essay 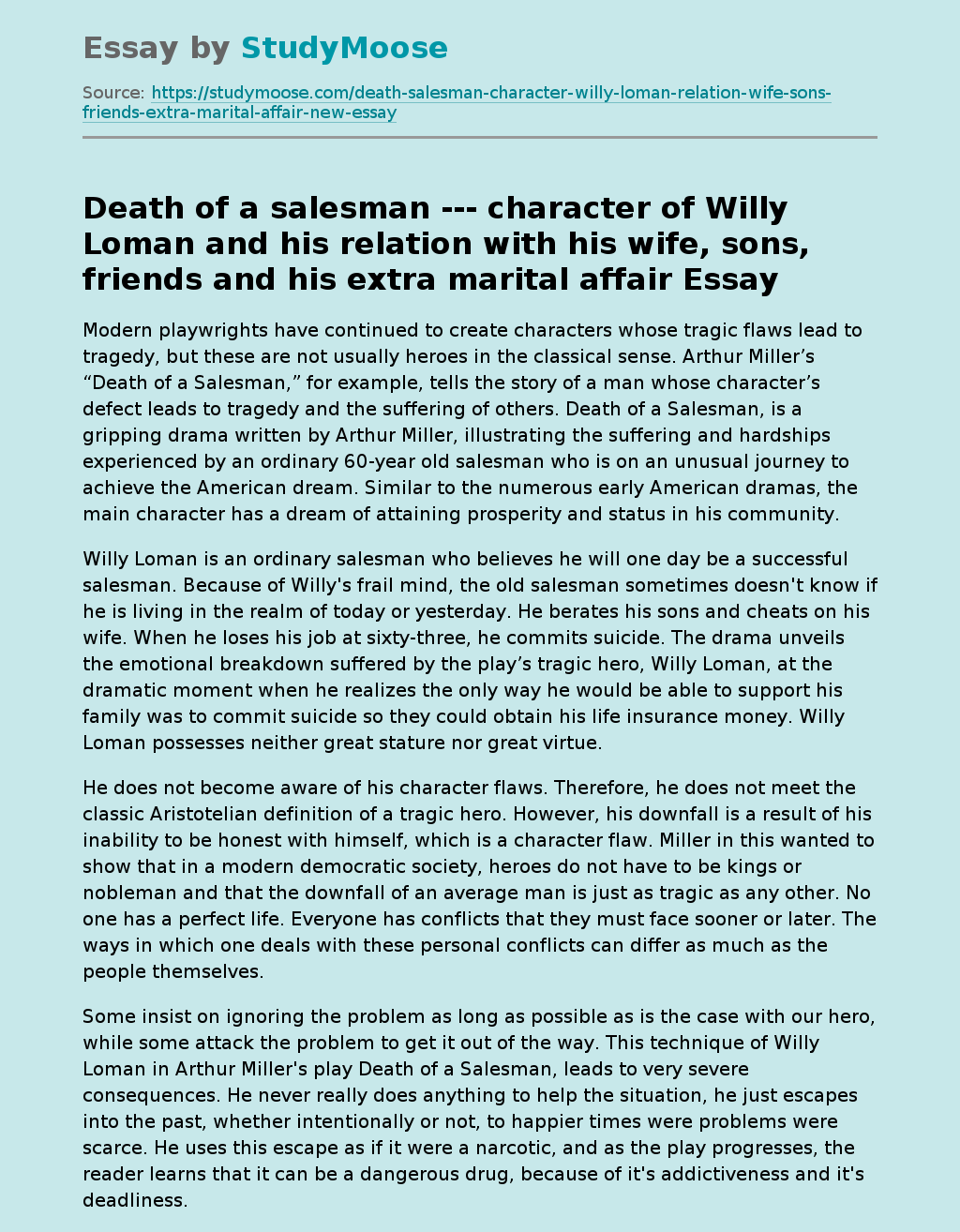