Tragic heroism dominates many of the plays written in the earlier years of literature. Many of the known authors and playwrights used them in their works to represent their main character. Among the more popular tragic heroes in the literary history are Othello from Othello, the Moor of Venice by William Shakespeare and Willy Loman from Arthur Miller’s Death of a Salesman. These two characters, although both fit the qualifications of a tragic hero, do so in different ways.

In Aristotle’s Poetics, he outlined the characteristics of a tragic hero as follows; first, someone who has a noble standing or who has a high position relative to his culture; he should be great, but not to the point of perfection.

Turn in your highest-quality paper
Get a qualified writer to help you with
“ Comparison of Tragic Heroes: Othello and Willy Loman ”
Get high-quality paper
NEW! AI matching with writer

Spectators must be able to relate to him as a man, not someone so godly. A fatal character flaw would cause his downfall and the consequences or punishments that he receives for it usually surpass the crime. However, the fall should not be limited to pure loss but may also be an increased awareness, some kind of self-discovery or self-realization or gained self-knowledge.

Othello perfectly fit the standards provided above. He was a prominent man being the general and commander of the armed forces of Venice. People respect him and look up to him because of his noble stature. However, as the play progresses, it slowly unveils the character flaws of Othello. His being so trusting of Iago, which was partly because of his military mindset of fully giving total confidence to a comrade, led him to be manipulated easily.

He was lured to believe that his wife was having an affair with another man. His jealousy took the better of him, thus he was not able to think clearly.

This character flaw pulled him down from the pedestal for it showed that even though he was a very prominent person, he also have some weaknesses just like all humans do. As the story comes to an end, he was overcome by his suspicion of his wife’s dalliance, which made him kill her. It was only after that incident that he realized his foolishness for believing Iago. Thus, before he took his life, he stated “Speak of one that loved not wisely, but too well, of one not easily jealous but, being wrought, perplexed in an extreme…. ” (Act V, Scene 2).

Too late was his realization of his lack of wisdom and naivete, which led to the tragic ending of the story. Willy Loman, on the other hand, has a different story. He may not be a very prominent person just like Othello, but within the realm of his culture, he is at the higher post. He was a successful businessman; he has his own home, a car, and what he perceived as a wonderful family. He saw himself as someone very important in his family and a cut above his contemporaries. This claim is evident in his statement in Act 1 where he uttered “I’m the New England man. I’m vital in New England”.

This prominence, although self-perceived made him qualify for the first qualification of a tragic hero. His flaws, however, also came from the perception he had of himself. He set a high standard for his son based on what he had accomplished, which the latter failed to achieve. As he got older, he became less effective as a salesman and things began going out of hand. He made major mistakes after another including an affair with another woman, which was discovered by his son making things worse. His faults, however, are not planned but were spontaneously derived from previous misfortunes.

In the end, the once very happy and contented Willy Loman became very sad and miserable that he decided to end his life through a car crash. We can see in these two characters the fulfilment of the qualifications for a tragic hero in different ways. Othello, somehow manages to fit in classically while Loman had to achieve it by diving deeper into the criteria. Nevertheless, the main idea of being a tragic hero was met by both, thus they are considered as such. This only goes to show that literature is not limited, which is a good thing because it allows writers to explore different possibilities of meeting set standards. 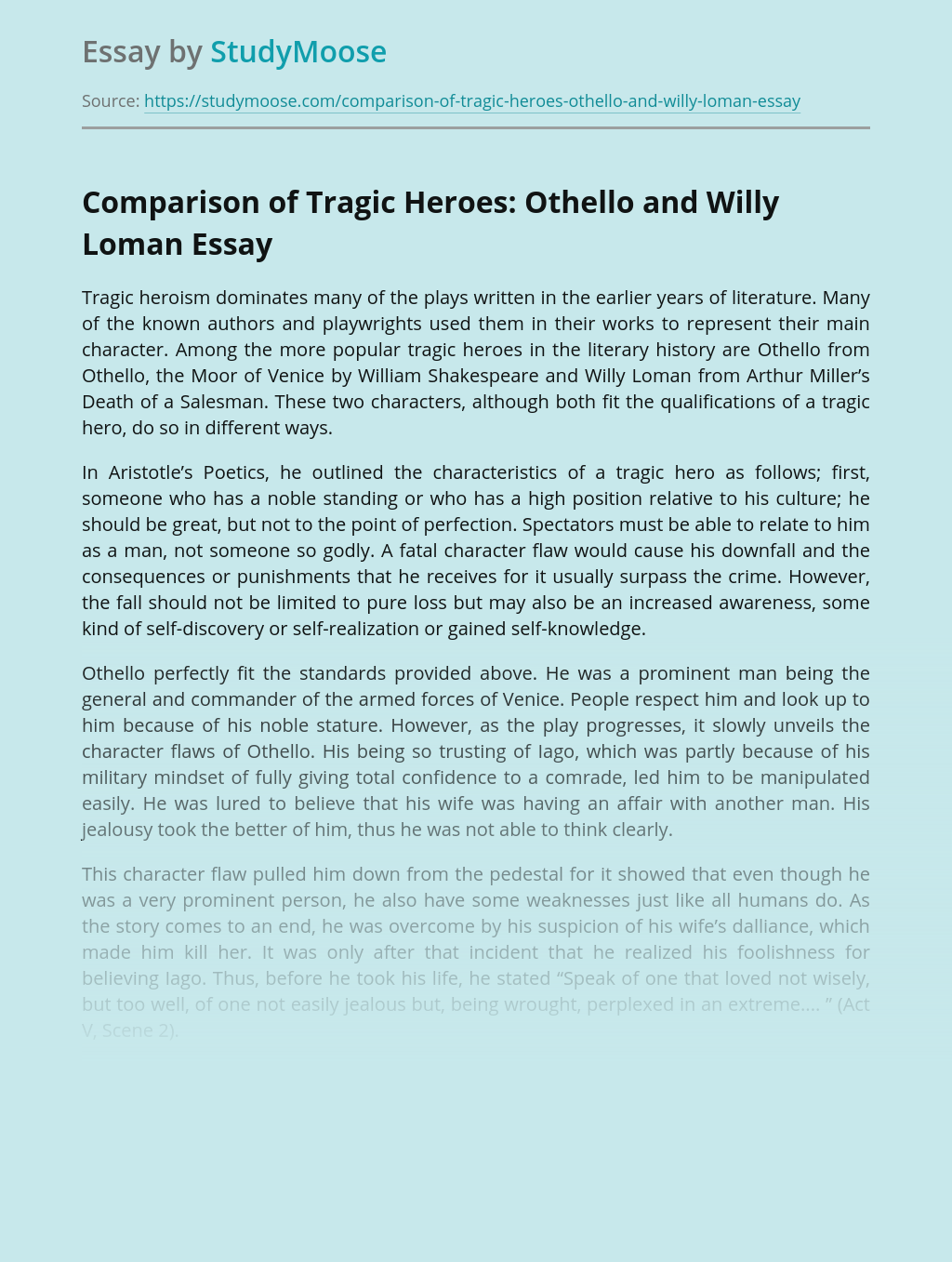 Turn in your highest-quality paper
Get a qualified writer to help you with
“ Comparison of Tragic Heroes: Othello and Willy Loman ”
Get high-quality paper
Helping students since 2015
Stay Safe, Stay Original