After the validation of the instrument, the researchers secured a written permit to the administrators of Alicia National High School, Records from the registrar office and guidance office are useful enough for the needed data on the list of student who are dropouts, repeaters, balik-arals and students with failed grades. After given permission, the researchers explained the purpose of the study to the selected respondents and then they made sure each participant corresponds to their predefined criteria. The researchers collected the data by means of survey questionnaire that comprises their age, gender, and year level and student status.

Turn in your highest-quality paper
Get a qualified writer to help you with
“ Data Gathering Procedure ”
Get high-quality paper
NEW! AI matching with writers

The problems encountered by the respondents will be identified through the second part of the survey questionnaire that was given to them. After, the respondents have taken the tests; the papers were checked, tallied, interpreted and analyzed.

In this study, the descriptive-survey method was employed to identify the role and significance of The Computerized Library System of City of Cauayan, District II, Cauayan City, Isabela, Philippines.

To define the descriptive type of research, Creswell (1994) stated that the descriptive method of research is to gather information about the present existing condition. The aim of descriptive research is to verify formulated hypotheses that refer to the present situation in order to elucidate it. The descriptive approach is quick and practical in terms of the financial aspect. Moreover, this method allows a flexible approach, thus, when important new issues and questions arise during the duration of the study, further investigation may be conducted. A survey is a structured way of learning about a larger group of people by obtaining information from a representative sample of that particular group of people.

Some of the advantages of a survey are that it describes the characteristics of a large population and there is no other method of observation, which can provide this general capability. It allows many questions to be asked about a given topic by giving considerable flexibility to the analysis. A survey is also a single most widely used research design in educational research; therefore, it was used in this educational research as well (Kavetuna, 2009). Purposive sampling method was done for the sample selection. A purposive sample refers to the selection of units based on personal judgment rather than randomization.

This judgmental sampling is in some way “representative” of the population of interest without sampling at random. Purposive sampling can be very useful for situations where it is needed to reach a targeted sample quickly and where sampling for proportionality is not the primary concern. In relation with the study, the researchers identified The Computerized Library System of City of Cauayan, District II, Cauayan City, Isabela, Philippines. It seeks to provide information and examine the relationship among variables.

According to Erik Erikson’s Psycho-Social Development of Personality, particularly the conflict stage of “industry versus inferiority,” that lasts from 6 to 11 years. In our culture, school life begins here. This stage is the beginning of life outside the family; a stage of systematic instruction, a movement from play to a sense of work. This stage describes that a child needs to do well and develop a sense of work completion and satisfaction in a job well done. Otherwise, the child develops a sense of inferiority and inequality. Another is the adolescence stage termed, “identity versus identity confusion” that occurs between 12 to 20 years, it emphasizes the difficult transition between childhood and adulthood that can be strongly affected by social limitations and possibilities. The adolescent is likely to suffer from confused roles. Doubts about one’s sexual attractiveness and sexual identity are common to this stage.

The inability to develop a sense of identification with an individual or cultural role model who gives direction to one’s life can lead to a period of floundering and insecurity. Another reaction is over identification with youth-culture heroes or clique leaders leading to a loss of identity. Because of these crucial stages where most high school students in the country are where at, many problems arises that can affect their functioning in their daily lives. An additional theory is from Abraham Maslow’s Hierarchy of needs, which points out the basic human needs. He believed that exposure to environmental conditions that permit or prohibit gratification of the basic needs prompts movement up or down the hierarchy of needs. Maslow suggests that, without the fulfilment of these needs, an individual may feel discouraged, weak and inferior.

In line with this study, if a student feels discouraged and inferior, his motivation may be affected and thus, there will certainly have inhibitions especially with his performance in school. Moreover, Carl Rogers’ Self-theory that points out that the ultimate goal of each one is to be a fully functioning person. It is a process in which the individual constantly pursues his or her actualizing tendency, and at the same time behaves in a manner that is true to the self. Rogers also described the characteristics of a fully functioning person these are: openness to experiences, existential living, self-trust, sense of freedom and creativity. With these theories, the researchers will conduct a study on The Computerized Library System of City of Cauayan, District II, Cauayan City, Isabela, Philippines as a basis for a proposed guidance intervention program. 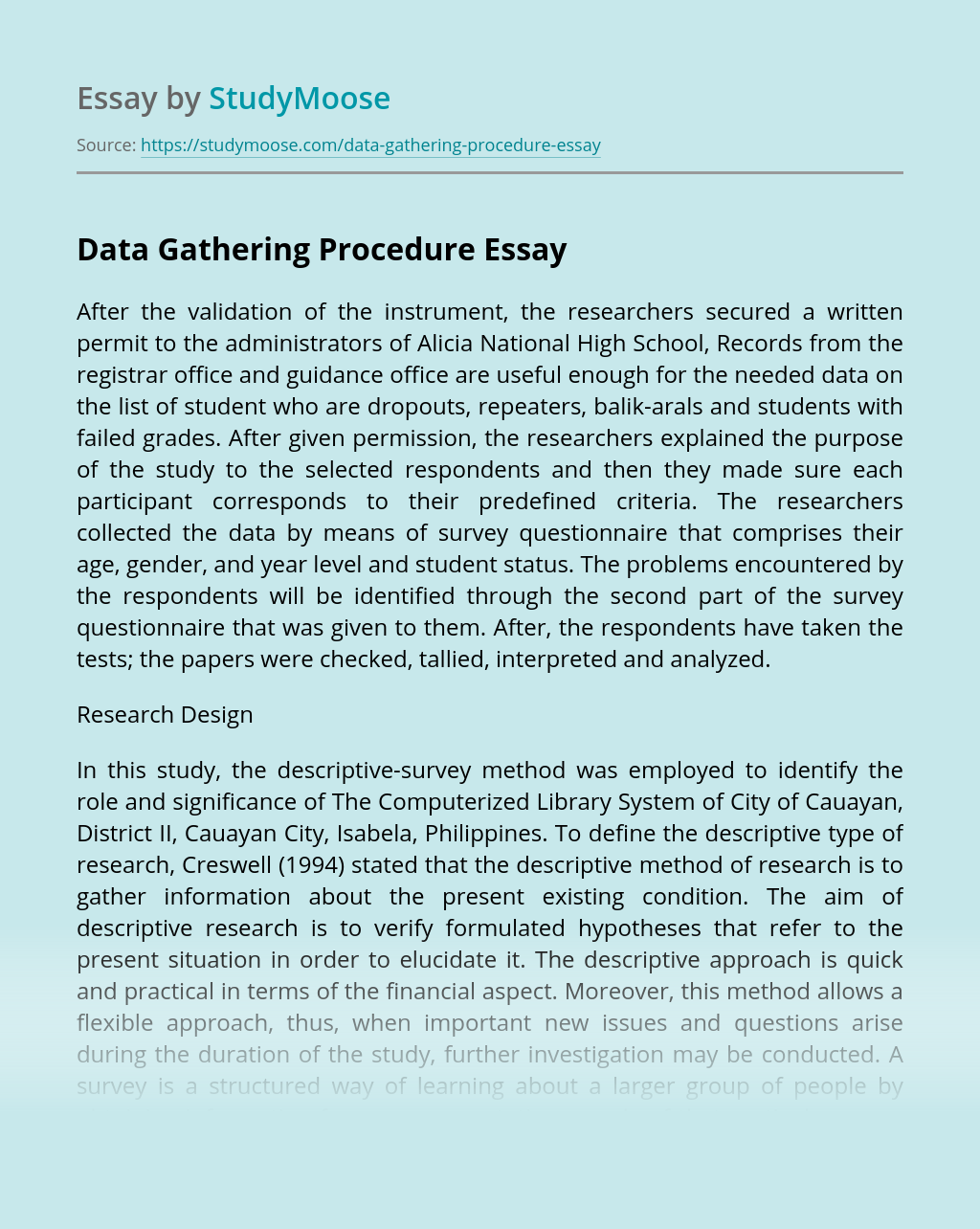 Turn in your highest-quality paper
Get a qualified writer to help you with
“ Data Gathering Procedure ”
Get high-quality paper
Helping students since 2015
Stay Safe, Stay Original