The poem is about the absurdity of life. He is actually arguing that humans waste their time on trifles which nobody needs. He mentions animals (deer and rabbits) and that is because animals don’t need to interfere with nature. Elements which are in the poem Gathering leaves: Robert Frost was the very embodiment of juxta-positionings, which he used in order to create tension throughout his poems. The poem Gathering Leaves is a great example of this, with the rhythm is greatly contrasted with the far depressed and sorrowful theme of the poem.

Don't use plagiarized sources.
Get Your Custom Essay on Themes of Gathering Leaves Just from $13,9/Page

The form of the poem is very representative of the themes within it. In the same way in which it seems brief, and in contrast to many of Frost’s other pieces, to be lacking in any sort of meat (by which i mean large blocks of text in similarity to that of ‘The Black Cottage’- pardon my metaphor vegetarians, for i find a similar pleasure in the use of metaphors as Frost does).

This poem is a comment on both the monotony of life, yet with at points an almost upbeat outlook, and the way in which man and natures’ cyclical nature is linked.

The way in which Frost describes the harvest is bleak in its presentation of an impossible task- ‘the mountains i raise, elude my embrace’, and ‘i may load and unload’, as well as showing a slight menace in the setting- autumn, the liminal stage between life and death, summer and winter, as all nature begins to die- coupled with examples such as the fifth stanza, ‘they grew dulled from contact with earth, next to nothing for colour’, hinting at a decaying state.

Frost, in the final stanza, then also presents a final view of the ‘harvest’ of leaves which can be interpreted as both cynical and positive. ‘a crop is a crop’ suggests the optimistic outlook that everything in nature and in the world has intrinsic value, and this continues ‘and who’s to say where The harvest shall stop? ‘ shows, as previously stated, the cyclical nature, and at once it contains both menacing and vital connotations. he nature of a harvest is that of something which a human relies upon for their wellbeing, hinting at the previously mentioned theme of dependence between man and nature, and yet the sense of desperate monotony and hopelessness i also apparent, coming after such lines as ‘i may load and unload Again and again’, as the actions of the narrator are intertwined with the cyclical nature of the seasons and nature itself. 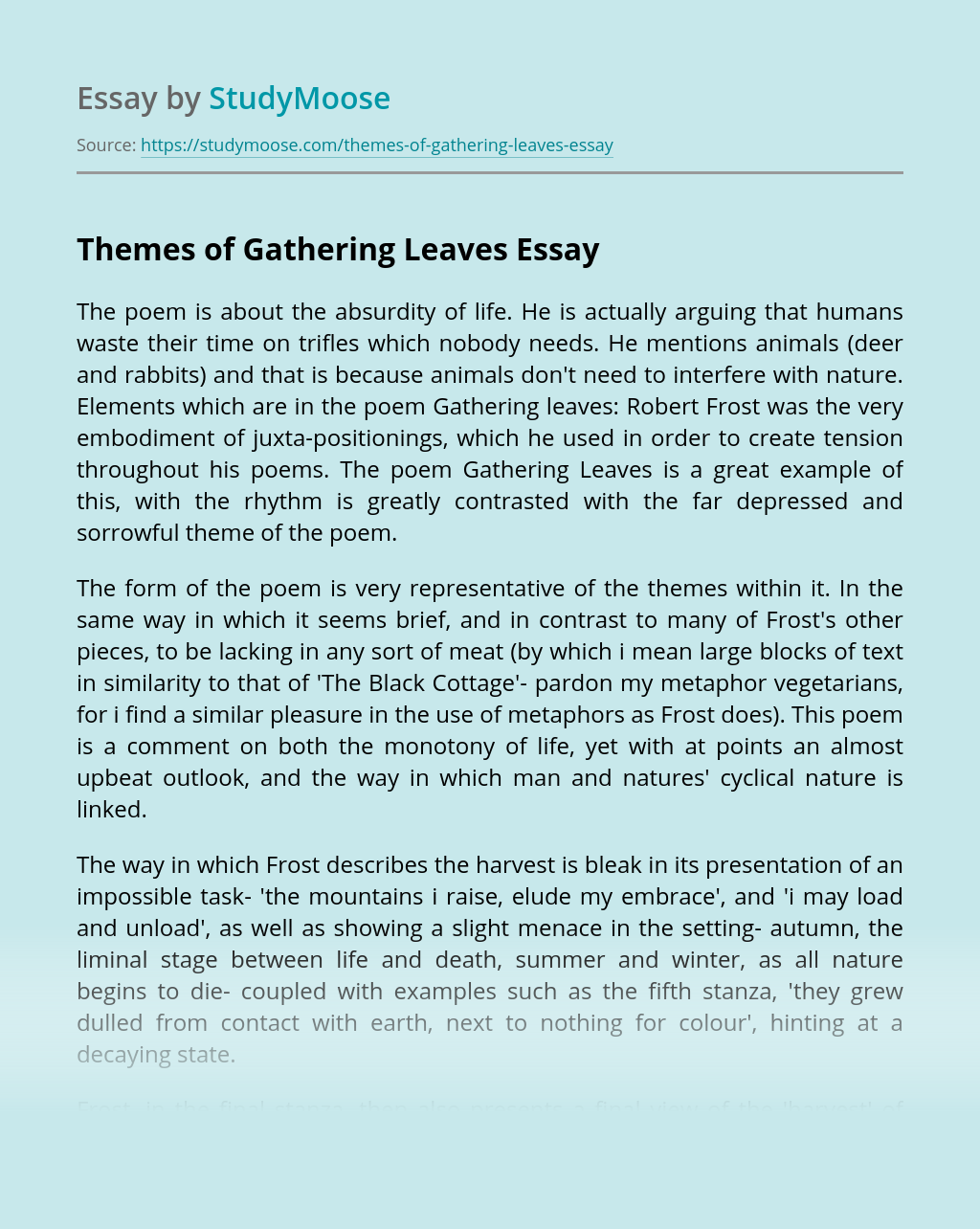 Nearly 2 million people suffer or are diagnosed with bipolar disorder; many of these people go untreated or suffer in silence due to fear of the unknown of what the disorder brings. Bipolar disorder is a disease that comes with a negative stigma; this has to do with the earlier link to schizophrenia. Many psychologists...

The objective of efficient resource allocation refers to an economy’s ability to meet its obligations in ensuring that all social and economic objectives are met without waste, for example to allocate resources so that they are distributed efficiently to improve the standard or living. This is the only way that we can ensure that we...

Question:”Traditional marriage is an outdated concept”To what extent is this true in your society. Marriage is defined as a man and woman being together by legal ties. Although the world are becoming modern nowadays. The concept of traditional marriage is still being practiced. The beauty of marrying opposite gender ,the construction of family tree and...

Have you, ever wondered, or just thought for a second about what Mother Nature has provided us with? Including all her extraordinary, mind boggling wonders that are present on our very own planet Earth? Have you ever thought about where you would like to go to explore or just too purely indulge in what nature...

What is the value-added by Owens and Minor? Is this value-addition noticeable? They own and handle the inventory for the manufacture. They take on the financial danger associated with the function of handling the stock flow to the healthcare facilities. They care for product returns and carry the danger for that. They bring the receivables...