Robert Frost’s Narrative poem, “Mending Wall” is a light-hearted yet tense depiction of opposing views that brings together two different people. Written in blank verse with simple structure and strewn with images alluding to myths and human history, this poem reveals the men’s customs and furthermore the never ending ritual of man, which guides the reader to conclude that In this poem Robert Frost does make an allusion to the famous Greek myth of Sisyphus. For those of you who are unfamiliar with this legend, it tells the story of a man named Sisyphus who was condemned to the chronic punishment of continuously pushing an oversized boulder up a steep hill only to watch it roll back down so he could start the process all over again.

Don't use plagiarized sources. Get your custom essay on
“ Mending Wall Commentary ”
Get custom paper
NEW! smart matching with writer

This directly relates to the Mending Wall because in this poem the two neighbors meet up from time to time to put boulders on top of the wall dividing their properties. Yet, just as inevitably at the fate of Sisyphus, the boulders frequently fall back down and the two men willingly repeat the process.

Another interesting concept that falls into the two men’s process, is that the neighbor who initiates the repairs of the wall is the speaker who believes that there is no need for a wall between their properties. If his true desire was to rid of the wall then he wouldn’t constantly restore it, therefore the speaker must derive some inside satisfaction from the building of the wall or even the connection it brings with his neighbor.

The structure of the Mending Wall is a long one-stanza poem. It is written in blank verse (no rhyming) and contains a narrative-like style. One of the main devices Robert Frost comprises is repetition, which is used as a technique to emphasize the collision of views between the neighbors. We first see the line “something there is that doesn’t love a wall” in the beginning of the poem when the speaker is referring to nature as that ‘something’, and once the line is repeated it has a new meaning. At the end of the poem the ‘something’ refers to the attitudes of the speaker towards the wall, meaning the narrator does not ‘love the wall’ and wants it down. Another example of repetition is the statement “good fences make good neighbours”.

This reflects back to and accentuates the idea and opinion that although people can be good friends, there will always be a barrier standing between them, acting as a boundary that separates their social relations from their personal privacy, ‘walling in’ what they do not wish to share with others. Robert Frost employs primeval diction to transform the ordinary scene of wall mending into an ancient act of savages. He emphasizes words such as “spells” and “elves” that make the two men seem ancient and from the Stone Age as they hoist and transport the boulders.

Also in history the building of walls, both literal and figurative, marked the very foundation of society. Figuratively, rules and laws are walls and justice is the process of wall-mending. And the ritual of wall maintenance highlights the dual and complementary nature of human society, meaning the rights of individuals are affirmed through the affirmation of other individuals’ rights. In the poem their communal act, or civic “game,” offers a good excuse for the speaker to interact with his neighbor as they perform the same procedural actions done by prehistoric humans. 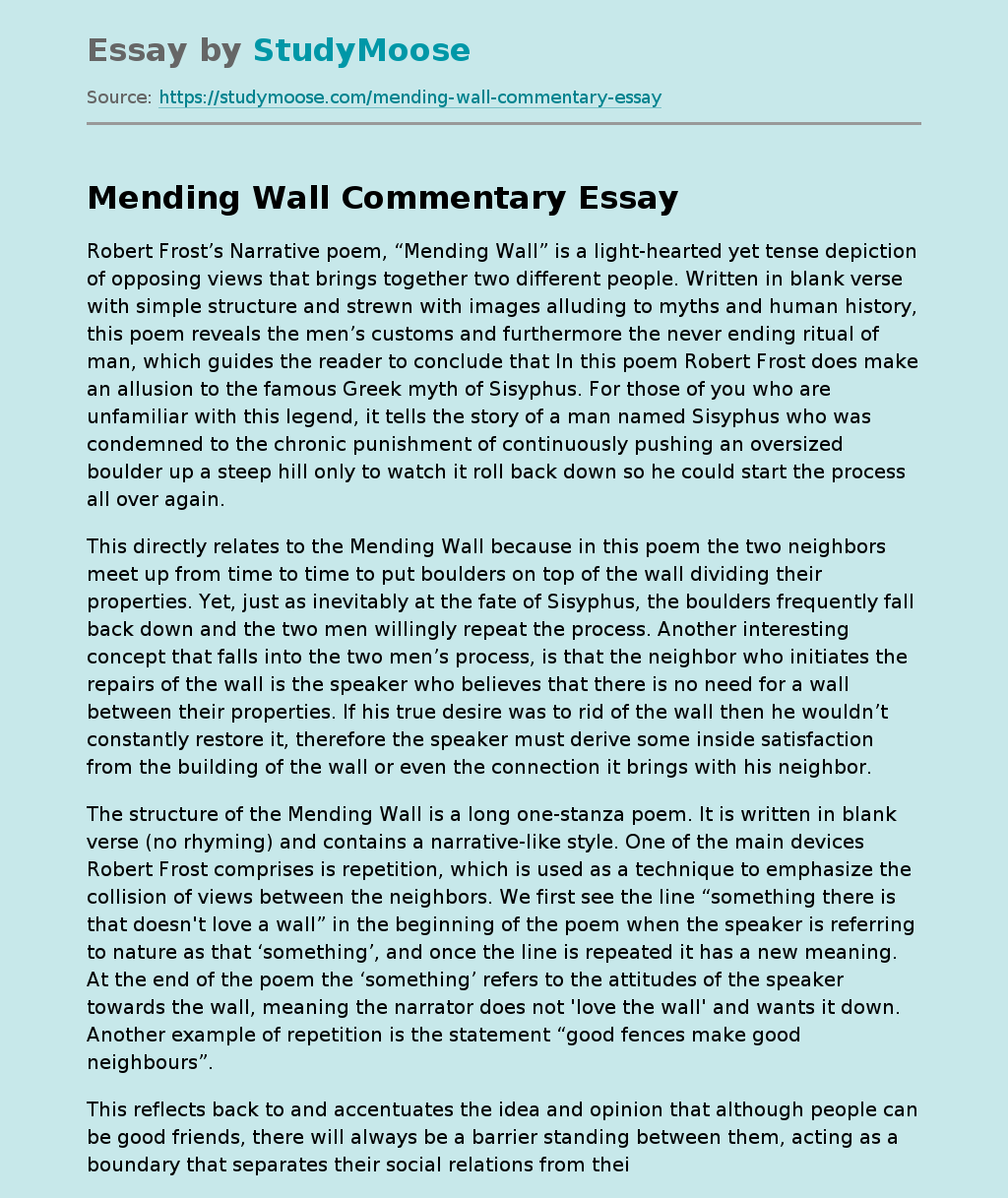