Since the beginning of time mankind has found that harmony and togetherness are more beneficial to the entirety of the group than dissonance and separation. When society works together as one, it attains the desired objective more rapidly and efficiently. The ultimate goal can only be reached after differences have been overcome, and cooperation has occurred. All of these acts are clearly identified in the poem “Mending Wall” by Robert Frost. He uses the wall as an extended metaphor to reveal the narrator’s thoughts about overcoming differences, cooperation, and unity.

Don't use plagiarized sources. Get your custom essay on
“ “Mending Wall” by R. Frost ”
Get custom paper
NEW! smart matching with writer

Before the members of any group can merge together, they must overcome the differences among them. Frost makes this apprehensible in his poem through the dialogue of the narrator. To exhibit the differences in himself and his neighbor, the narrator declares, “He is all pine and I am apple orchard” (line twenty-four). Instead of working together to overcome these discrepancies, they fill in the gaps in the wall to promote further division.

The narrator begins to ponder the original motives for erecting the wall when he questions his neighbor’s statement “Good fences make good neighbors” (line twenty-seven).

The narrator then contrives the notion of arguing that his neighbor’s statement is ungrounded. However, he realizes that his neighbor must understand that the wall was built without reason himself.

After differences have been overcome, it is necessary to use those aberrations to help solve problems and gain mutual benefit. The narrator ponders the notion of cooperating with the neighbor to take down the wall, but he is discouraged from that because of his neighbor’s persistence in the quote: “Good fences make good neighbors” (line twenty-seven). While the narrator does cooperate with the neighbor to build the wall, it is only him reaching for any kind of cooperation, instead of complete division. His true wishes are for the two of them to take down the wall, but that requires cooperation from both people, in which one is not willing to give such effort.

If such a thing could be obtained, then it would certainly lead to the narrator’s true desire: unity.Unity is the ultimate goal that the narrator is striving for. He wishes to unite in the demolition of the wall instead of prolonging its present state of construction. While they are united, it is only in difficult labor to construct the wall. The narrator desires a cogent reason for the wall’s existence prior to his further assistance in its fabrication. He states, “Before I built a wall, I’d ask to know what I was walling in or walling out, and to whom I was to give offense…”, displaying this desire (lines 32-33). The narrator sees that merging with his neighbor to build a mutual relationship as opposed to building a wall would be to both of their benefits.

Since the beginning of time mankind has found that togetherness is more beneficial to the whole of the group than division. Frost expresses this in his poem “Mending Wall” by using the wall as an extended metaphor to reveal the narrator’s thoughts about overcoming differences, cooperation, and unity. Before the members of any group can merge together, they must overcome the differences among them. After differences have been overcome, it is necessary to use those aberrations to help solve problems and gain mutual benefit through cooperation. Finally, after these things are done, the ultimate goal of unity is reached. The poem “Mending Wall” shows that Frost’s theme of unity is relevant in its applications to the modern world. 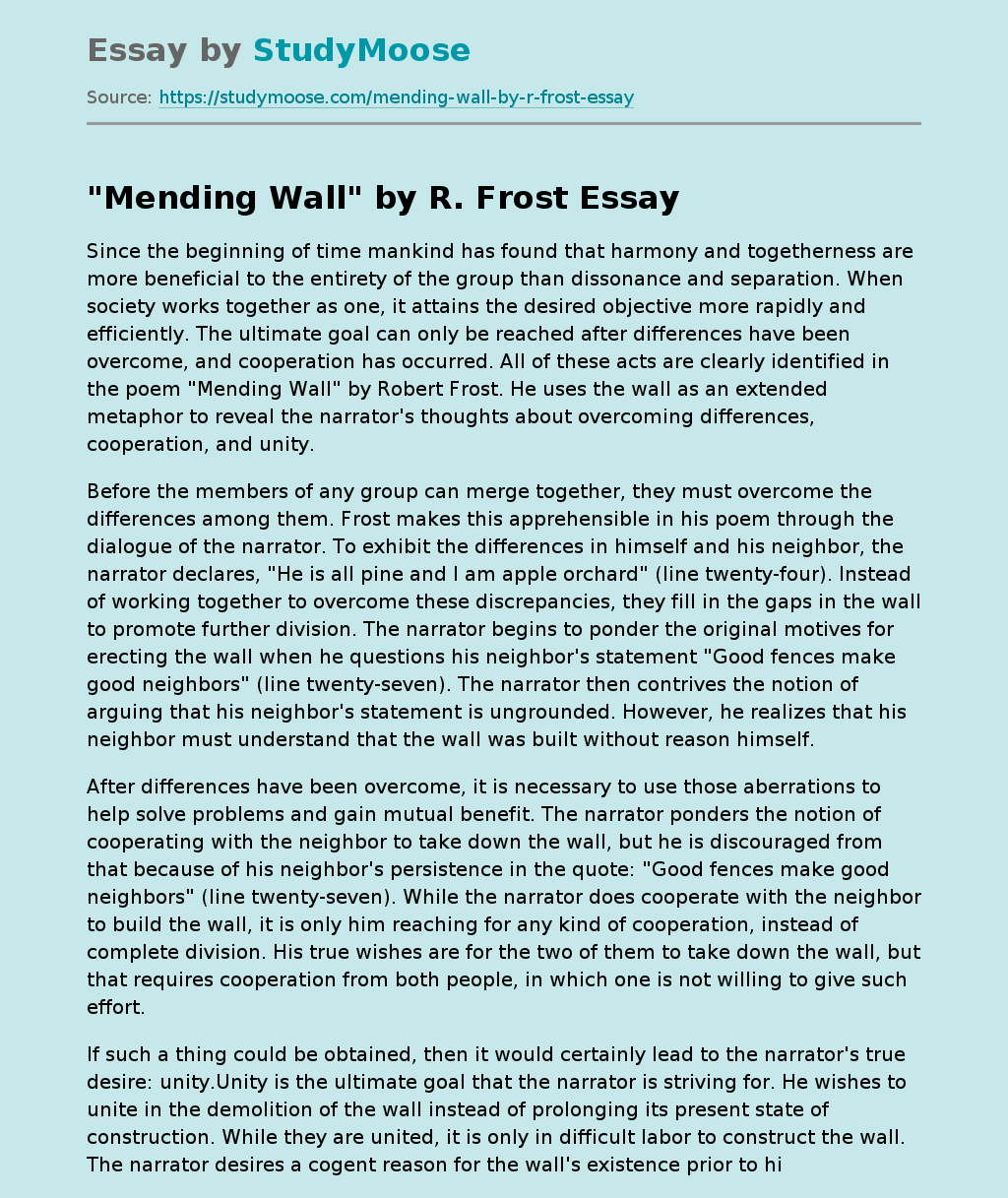