The book “The Gathering” by Isobelle Carmody explored the theme of “Good VS Evil” in such an intricate manner that every aspect of the text, the characters, themes and her own message portrayal, all become involved. This means that the reader can understand the plot of the book, and will be able to clearly read the message being revealed by the three main aspects of it. Other minor things, such as the title of the book itself, contribute to the feelings of the reader, all of which are designed by Carmody to make the book exactly what it is.

Don't use plagiarized sources. Get your custom essay on
“ Isobelle Carmody’s “The Gathering” Theme Analysis ”
Get custom paper
NEW! smart matching with writer

By using the characters to develop the readers understanding of “Good VS Evil”, the themes to allow the reader to grasp the message being sent by Carmody and her style of writing, and the purpose of Carmody’s presence in the text itself, “The Gathering” has proven to be one of the most fascinating book of its kind.

The characters in the book “The Gathering” help us to grasp the message which is being sent by the author, that is, “Good VS Evil”.

Nathanial (Nat) Delaney, who stars in the novel as the main character, depicts the image of the good character. One who has found his place, and has managed to establish himself as a crucial role in the development of his own life, and that of those around him. In the fight against the current Kraken, Nathanial, as a character in the text, has helped the reader understand who the people around him are fighting for, whether it is good or evil.

His relation to the book outside the Chain would be very minimal, as most of the text’s relation to him is connected in some manner. His study on Anna Galway as a veteran of Cheshunt exposed the truth about her past, that is, that she was part of a previous Chain, one which failed to do its job.

Carmody uses these “two separate” issues in Nathanial’s life to create a feeling of hope and understanding, but also confusion, as to why that Chain had failed. The characters around Nathanial, although star a very important role in the progression of the story, are not focused on in the same way as that of Nathanial, and therefore are only know through the Chain. They, being Nissa, Indian, Nathanial, Danny and Seth, all relate to the “Good” side of the story, and the true meaning of being “Good” is developed in a very intriguing way by Carmody.

The use of making these main characters “Good” rather than “Evil” creates a connection between the reader and the text. When this connection is made, through a series of hardships and moments which make the reader realize just what role they are playing in the plot, the reader then begins to feel the same things as are being described by Carmody, the emotions, the desire for everything to turn for the better.

The “Evil” side of the book “The Gathering” is also shone through the characters, particularly those fighting against what the reader and the Chain desire. While there is “Evil” present in a physical way through characters like Mr. Karle and Buddha, “Then the Kraken stepped forward and slapped her across the face. A trickle of dark blood ran from the corner of her mouth…” , “The match landed on his tail and flames swept forward up over him.” , there is still an ever strong emotional, physiological evil. For example, when the final fight between “Good” and “Evil” was set up at the abattoir, Mr. Karle uses his advantage of knowing each of the members of the Chain’s mental weakness.

By picking at their weaknesses, the reader feels the sympathy and sorrow felt amongst the characters. “(Nissa) No one could ever love such a creature except out of pity” , “(Indian) you would recognize the signs of concussive brain damage.” , “… (Nathanial) her only begotten son is going the way of the father. So terribly sad. So ironic.” , “(Danny) I think you truly must have damaged your brain in that field. The dogs must have bitten into it” . This makes the reader fully understand how the “Good VS Evil” is present within the text, as they are fully taken in to the emotions of their own understanding as to what is being done by the Evil.

The themes in the book “The Gathering”, namely love, friendship, suspense, and believability, allow the reader to grasp the concept of “Good VS Evil”. The theme of love is explored and expressed through the characters of Nathanial and Nissa. Nathanial, throughout the text, has started to develop a fond affection toward Nissa. Although Nathanial initially regarded her as “…a girl up the far side with odd spiky red hair sticking up in all directions.” ,as the story progressed, the Chain was re-created, and issue arose which (to lay to rest) depended on the support and encouragement of one another, Nathanial fell more and more in love with Nissa. This ploy by Isobelle Carmody is an attempt to create a relationship between both them as a couple, and the reader with them as a couple. The reader then feels more for the success of the side in which this couple is committed to. This connection between reader and characters is then played on by Carmody as they face struggles, and almost an absolute failure as the Chain.

Another theme in the text is friendship. This ever strong theme is present throughout the whole book, one which supports the structure and plot of the text. The friendship and trust which is needed to create and hold the Chain was immense, and was evident throughout; “”You’re not one of us” Nissa was saying to Seth.” “”Nissa, we’re the Chain,”… “”The five of us make up the chain and he’s trying to break Seth away from us!”” . This shows that through hardship and times of struggle, friendship will bond one another together, and will prevail. Though not as cliché as love, suspense plays the most important role in the story. Carmody uses suspense throughout the story, specifically when the text is nearing a rise in tension, a chapter conclusion, or a climax. This is so that when the reader has reached any of these points in the text, they do not want to put it down because there is a hook, telling the reader that more information will be revealed, or leaving them on a “cliff-hanger”.

Suspense is also used in the description of important scenes in the plotline. To do this, Carmody would, momentarily, leave the dialogue to give a description of the surroundings, or such, so that the reader can grasp the importance, or the feeling trying to be sent by her. “It was a grim joke, considering why I had come. She hummed to herself as she emptied the blackberries into a double boiler.” This shows us how something so irrelevant, as blackberries, can give an effect, and the effect in said situation was the fact that she was just an old woman, a genuine person. The last, but as important as all other themes, is believability.

Carmody uses the technique of believability to connect the reader to the text, so that we feel what the characters are feeling, and we feel for them. She does this by making the reader understand the position they are in, and how each character depends on one another. Also, by influencing the reader to love the “Good” characters of the text, there is then a vile hatred for that that is evil, as with the characters. The contrast is then able to become more evident, between “Good VS Evil”.

Throughout the book “The Gathering” by Isobelle Carmody has proven to explore the theme “Good VS Evil” in a very detailed manner, that is, by using things like the themes, characters, and Carmody’s own message, which seeps into the text all through the story. This is the message of “Good VS Evil”, it is the message of the superior themes within the story, which help dictate everything from emotion to decisions. The text “The Gathering” by Isobelle Carmody has, in no doubt, managed to explore and enlighten the reader of the theme, “Good VS Evil”. 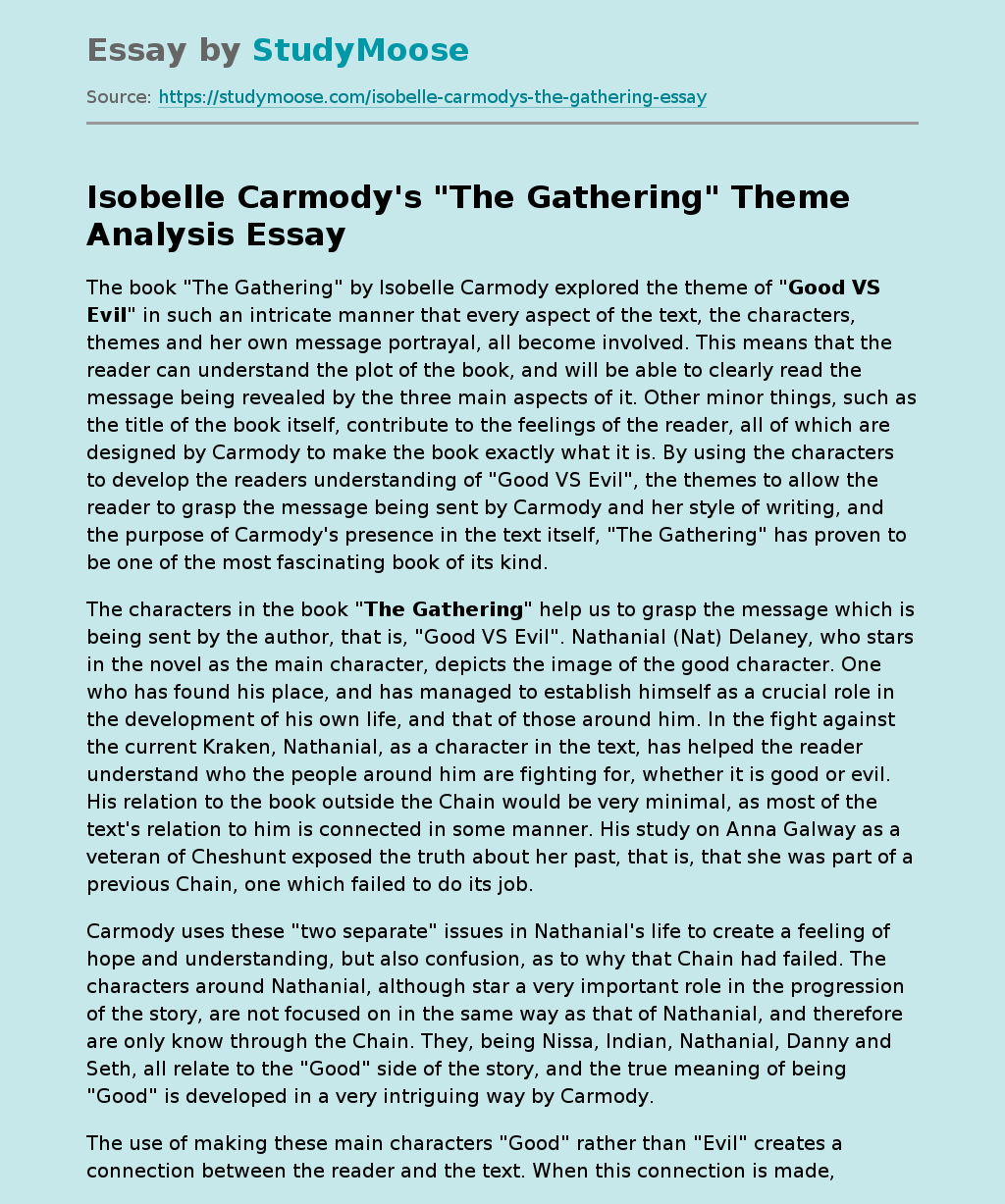