Sidney Sheldon’s book, “Tell Me Your Dreams” carries a dark theme. It focuses on how the central character, Ashley Patterson, represents the seemingly well-adjusted, successful and attractive young working professional.  Deep inside though, she is experiencing stormy emotions.  A product of  traumatic childhood experiences, she is a walking disaster, ready to explode.  She is proof that parental abuse can strongly affect an individual’s future behavior and life.  The power of parental nurturing cannot be underestimated, and lack of respect by a parent for a helpless child can produce trauma, shattered dreams and disastrous results which the child carries into adulthood.

Don’t waste time
Get a verified writer to help you with Analysis of the Main Theme in Sidney Sheldon’s Tell Me Your Dreams
Hire verified writer
$35.80 for a 2-page paper

Ashley Patterson’s troubled personality is introduced at the very start of the novel.  Her paranoid state is immediately presented in the novel’s first few lines:

Someone was following her.  She had read about stalkers, but they belonged in a different, violent world… She was trying desperately hard not to panic. But lately her sleep had been filled with unbearable nightmares and she had awakened each morning with a feeling of an impending  doom (Sheldon, 1998, p.

Described as an intelligent and attractive woman who has been living in Cupertino,

California for three years at the start of  the story, Ashley Patterson, daughter of a famous heart surgeon Dr. Steven Patterson, seems to have many good things going for her. Looks, however, can be deceiving.  Not all that looks well on the outside – like an innocent and beautiful appearance, reflects what is on the inside. Ashley gets involved in a series of brutal murders, specifically men who were stabbed and castrated.

As far as the police authorities were concerned, truth can be hard to find and later, as they were to find out, hard to believe. Eventually, the authorities find the same DNA in each crime scene, trace it to her, and Ashley is arrested and placed under psychiatric investigation.

While undergoing therapy Gilbert Keller, Ashley’s dark past is gradually revealed.  Ashley admits that her co-workers, the outgoing and merry Toni Prescott, and the shy and lonely painter Alette Peter are not real, when she says to Dr. Keller: Don’t you understand? They’re not real. They’re my imagination (Sheldon, 1998, p. 308). When Dr. Keller suggests bringing the three women fact-to-face with each other and tells Ashley, “You have to get to know one another. It’s the only way you’re going to be cured” (Sheldon, 1998, p. 308), he confirms the main character’s multiple personality disorder.

Dr. Keller’s calming presence symbolizes peace in Ashley’s world of chaos and pain.  He soothes Ashley when he explains to  her the presence of her other personalities Toni and Alette by saying, “you must remember that Toni was born out of your pain, to protect you.  The same is true of Alette” (Sheldon, 1998, p. 344).  At this point, and as the story progresses, readers are able to see how Ashley’s painful past – including a father who sexually assaulted her and a mother who did not appreciate her – had caused her personality disorder, leading to her crime. She remembers how her mother was scolding her for singing while they were in a car, which leads to an accident (Sheldon, 1998, p. 349).

Her worst and repeated memories of her father saying “You’ll like this” followed by “an image of the man getting into bed beside her” followed by a scream to stop (Sheldon, 1998, p. 327) depicts just how haunting and traumatic child abuse in the physical or sexual sense can be. This highlights  the duality of the human psyche.  Ashley’s father may be famous and enviable and he may have obtained the respect of his colleagues and the general public, but to his own daughter he is a monster.

Ashley Patterson’s guilt is confirmed in the story when her split-personality character says, ”I’m not a dangerous criminal. I’m a normal woman. And a voice inside her said, Who murdered five innocent people” (Sheldon, 1998, p. 291).  With this, the novel’s main theme – of serious parent-child conflict can be highly traumatizing. Parental abuse carries grave consequences like behavioral problems and sometimes, the effect – like youth violence — is irreparable. I chose this theme because it is one that is being experienced in an alarming way in different countries.

It is a universal problem that requires concerted action – by therapists, family members, police authorities, social workers, the community-at-large, and so on. What interested me about the novel’s plot is the dramatic revelation, through Ashley’s therapist, of her multiple characters. Then, there is also the gentle and positive reassurance provided by Dr. Keller, which gives an encouraging portrayal of the medical community, and how it sees a  breakthrough when patients who are victims of abuse seem to make progress or attempt to let go of their hurts and pains.

The most important character in “Tell Me Your Dreams” is Ashley Patterson. All the unfolding events and issues revolve through her, and she serves as a symbol of others who suffer a disorder but who deserve to be treated not as inferior beings but as individuals who need understanding and help.  On the other hand, her father symbolizes the demented  minds of those who may appear respectable from the outside but who are capable of causing tremendous harm with their acts.

The context, or the place and time where the story takes place, begins in Cupertino, California, a sleepy corner of the world but one which is bustling with corporate activity.  The context helps highlight the dual personalities of several characters in the novel, like Ashley Patterson and Dr, Steven Patterson. The story also takes readers from London to Rome to Quebec City to San Francisco in Bedford, Cupertino, as if pointing out how fast and varied modern-day developments go. The context, or multiple settings, also parallels the multiple personalities of the main character and their different activities at different points in time.

Ashley Patterson’s multiple personality disorder is discussed by Dr. Salem, readers gain a better understanding of a disorder which is real.  It is described as “a condition where there are several completely different  personalities in one body. It’s also known as dissociatve identity disorder. It’s been in the psychiatric literature for more than two hundred years. It usually starts because of a childhood trauma. The victim shuts out the trauma by creating another identity” (Sheldon, 1998, chap. 12).   The author leaves an encouraging note in his book that say that some cases of multiple personality disorders are treatable.  Unfortunately, this was not the case with Ross Carlson, a teenage boy diagnosed with Multiple Personality Disorder. As the news goes:

In the summer of 1983, the bodies of Rod and Marilyn Carlson were found beside a road in Douglas County, Colorado. Both had been shot execution-style in the back of the head. Ross Carlson, their teenage son, was later charged with the murders… Eventually, therapists identified as many as 10 personalities residing within Carlson. His attorneys later argued that Carlson’s parents were abusive people who forced their twisted religion on their only child, causing him to develop the diverse characters as a defense mechanism…. The six-year drama ended in 1989 when, at age 25, Ross Carlson died of leukemia (“Multiple Personality Disorder,” para. 2).

Ross Carlson is the real-life counterpart of Ashley Patterson. In both cases, the truth hurts – that people who are your family and who are  supposed to nurture and protect you can be capable of inflicting the greatest harm.  The two cases – one portrayed in a novel based on real life, and the other a real-life incident – show that family upbringing and genuine care, concern and nurturing from parents are the best guarantees for a child’s future.  The two cases stress that people afflicted with Multiple Personality Syndrome are, after all, human beings who, in the first place, just needed to love, to be understood, and to heal.

Larson, B. (n.d.). Multiple Personality Disorder. Retrieved May 19, 2008, from http://pullingdownstrongholds.com/deliverance/multiple_personality_disorder.htm

Analysis of the Main Theme in Sidney Sheldon’s Tell Me Your Dreams. (2017, Mar 17). Retrieved from http://studymoose.com/analysis-of-the-main-theme-in-sidney-sheldons-tell-me-your-dreams-essay 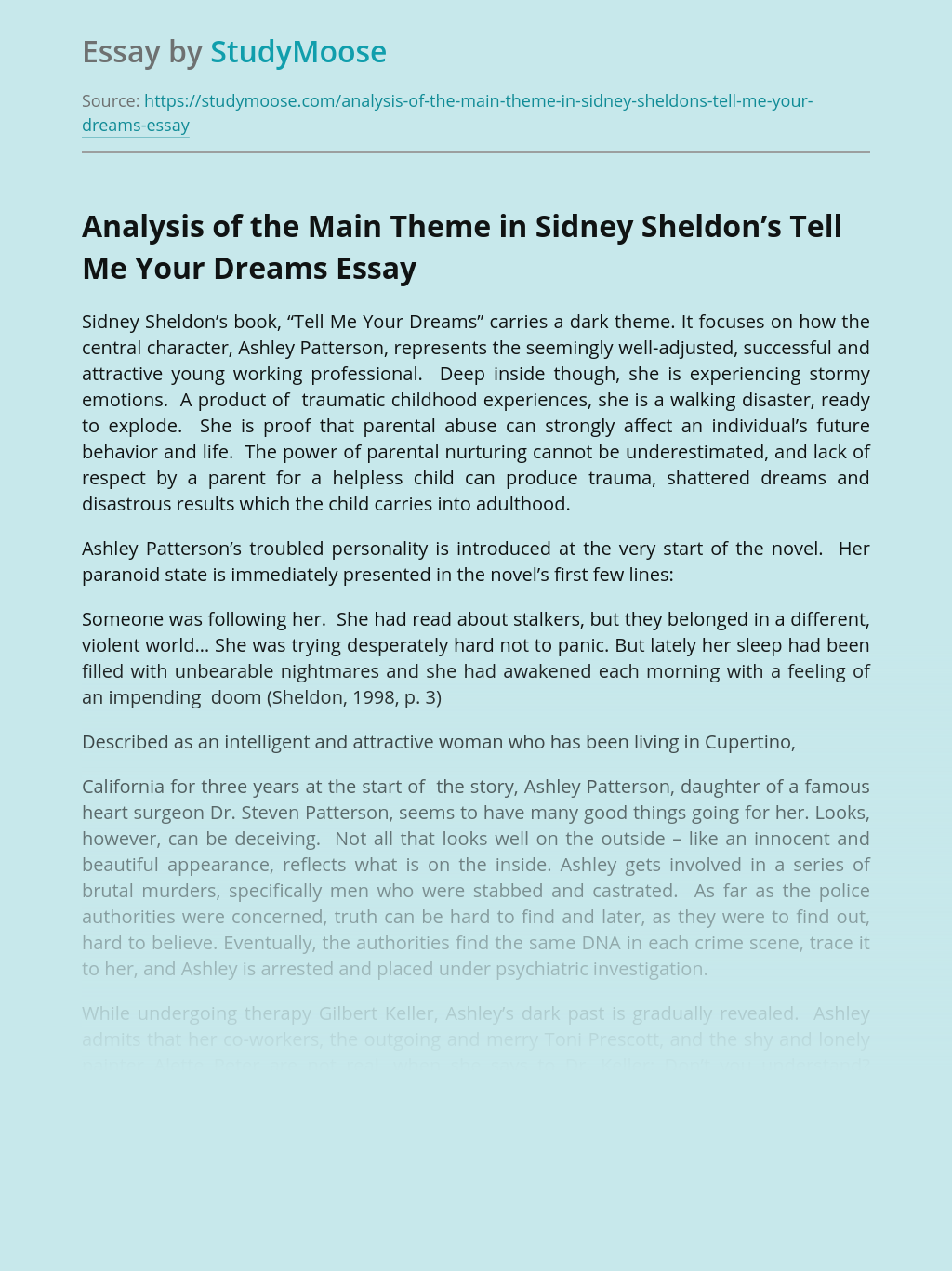 Don’t waste time
Get a verified writer to help you with Analysis of the Main Theme in Sidney Sheldon’s Tell Me Your Dreams
Hire verified writer
$35.80 for a 2-page paper
Stay Safe, Stay Original