Corruption of the court within the Duchess of Malfi

From Act I of ‘The Duchess of Malfi’ what impressions does the audience get of the court and how does Webster create this? Include a close analysis of a section of your choice.’The Duchess of Malfi’ revolves around the predominate themes of the Jacobean period, during the reign of King James I. England faced a leader they did not trust as seen through their pessimistic literature work. The country had been previously known to be strong and powerful whereas it was now overturned by a weak and feeble King.

Don't use plagiarized sources. Get your custom essay on
“ Corruption of the court within the Duchess of Malfi ”
Get custom paper
NEW! smart matching with writer

This era focused on tragedies where there was an emphasis upon themes such as drama, betrayal, murder, conspiracy, tainted loved, revenge and death. Such ideas came about due to the corruption of the court where the growing rule of money and greed, shifted society towards a more capitalist economy. The King had surrounded himself by false sycophants causing him to be blind to the erroneous ways of his uninformed court. These selfish acts of the king and other individuals went on to affect the entire kingdom where “death and disease through the whole land spread”1.

Webster has carefully portrayed this cynical view of human nature through the impression of the court within the opening act. This is apparent through his writing techniques and structure to reflect the given context through characterisations.

During the first Act, the audience is introduced to a majority of the court, from Aristocrats such as the Duchess as well as her courtiers and stewards. There is an immediate indication of differing levels of status to the audience, which Webster has illustrated through the style of his language.

He has focused on techniques which most playwrights at his time abide by, with the use of Blank verse and prose for a majority of the dialogue. By combining these two writing styles Webster was able to create confusion and heighten dramatic effects. The result of this conveys the corruption of the actual court to be prevailed within the play. The audience learns this through the relationships of characters such as Ferdinand and the Cardinal who conspire against their own sister.

This ludicrously deceitful court is never more so apparent than in the contrasting conversation between the Duke Ferdinand and Bosola (lines 224 – 284). The beginning of the conversation between these two characters exemplifies the theme of appearance and reality as: “There’s no more credit to be given to th’face than to a sick man’s urine.”2 This implies that there is more to a person than what meets the eye and therefore individuals should not be underestimated. The effect of this causes suspicion to arise among individuals as they begin to distrust one another and therefore lead themselves into a world of deception.

It could also be suggested that Webster has made a reference to the court to be completely different in reality as what may appear to the outsider. As the dialogue progresses the audience see Ferdinand bribing Bosola to be an “impudent traitor”3 within in the Duchess’s household. It is rather ironic that the amoral representation of malcontent, Bosola would be against such a malicious act. This is due to his inverse integrity where he contradicts himself, as he is able to commit “notorious murder”4 yet opposes deception and dishonesty. Nevertheless Bosola’s approach to this proposal only highlights the sleaze of Ferdinand’s character, which thus reveals the corruption of the court.

This is heightened through Ferdinand’s manipulative techniques to make Bosola feel as if this offer is “worth thanks.”5 As Bosola has no other choice he is only inclined to “do all the ill man can invent.”6 This illustrates the great impact a ruler has on its subjects. This also implies that any correction of such a court can only “begin at” the “home”7 of the Duke.

Nevertheless, this evil appoach by the Duke would be expected by Jacobean audiences as such tragedies relied upon the use of conspiring acts. Even so, such use of malevolent wickedness portrays Ferdinand as a “corrupter”8 who only reflects his court. The audience has previous knowledge of this from Ferdinand’s arrogance towards Castrichio when he said “But I can laugh at you fool.”9 The Duke gets away with such conceited behaviour as his court of sycophants are unable to “inform him of the corruption”10 which he brings. This creates a faï¿½ade of falseness which only leads to more betrayal within the society.

The Cardinal is another example of this through his mistreatment of Bosola. It is apparent that Bosola has been wronged, by the Cardinal, through his clever use of imagery and language against the “great fellow” who was “was able to possess the greatest devil and make him worse.” 11 For example, Bosola’s simile of comparing Ferdinand and the Cardinal as “plum trees that grow crooked” who “none but crows, pies and caterpillars feed on”,12 reflect the two characters spitefulness preventing them from advancement. Therefore it is again implied that there is a lack of trust between the rulers and their court and as a result the audience view the court as an unjust, devious place.

Corruption of the court within the Duchess of Malfi. (2020, Jun 01). Retrieved from http://studymoose.com/corruption-court-within-duchess-malfi-3476-new-essay 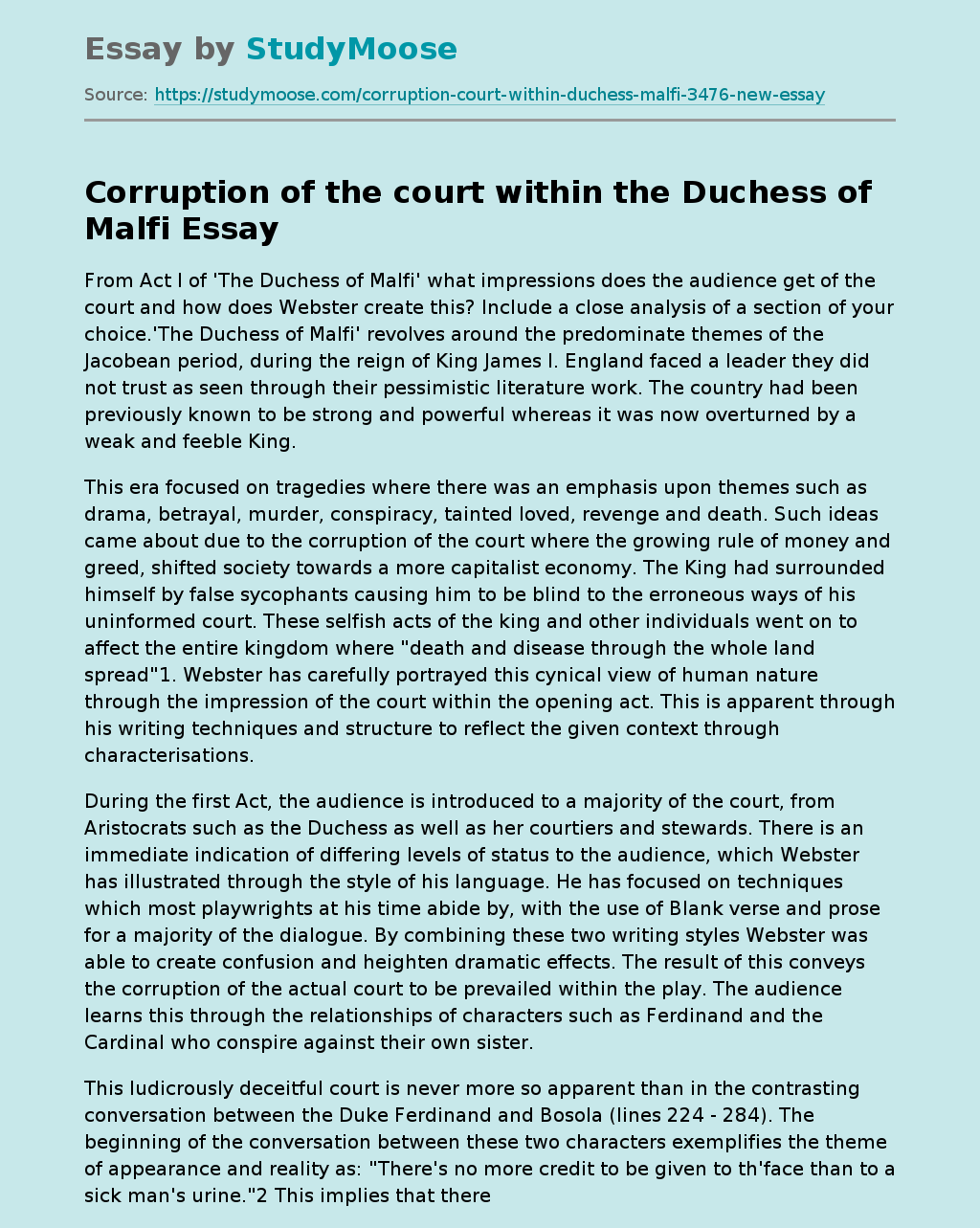