Corruption in The Duchess of Malfi

The world in which The Duchess of Malfi is set is riddled with corrupt practices and people. There are 3 major types of corruption that occur throughout the play: moral corruption, political corruption and mental corruption. The idea of corruption is introduced in Antonio’s first speech. He comments on how a well governed, noble palace should be, then contrasts this with the idea of a court where ” some curs’d example poison’t near the head, death and diseases through the whole land spread.

Don't use plagiarized sources. Get your custom essay on
“ Corruption in The Duchess of Malfi ”
Get custom paper
NEW! smart matching with writer

” This helps us to recognise Antonio as a noble, well-educated character who can be trusted to provide an honest view of the situation.

It also points out that someone at the head of the court has caused the sickness and disease, the corruption, which has spread throughout the land. The image of water in Antonio’s speech is continued through the act. The ” common fountain” links to Antonio’s view of the Cardinal that ” The spring in his face is nothing but the engend’ring of toads,” that something that appears pure can in fact be diseased, impure and polluting.

Antonio is able to see through the rich tissue that has been used to hide a rotten and dead body. This is not the first suggestion that the Cardinal is a corrupt man; Bosola’s claim that he “…fell into the galleys in your service,” introduces the idea that the Cardinal may not be as religious and honourable as a man in his position should be. Bosola’s account of the matter is reinforced by Delio’s recollection of the event and Antonio professing that he has ” heard he’s very valiant.

” The Cardinal must be very devious and infectious with his corruption if he is able to corrupt Bosola; it is said he ” were able to possess the greatest devil, and make him worse.”

The Cardinals corruption is the most common throughout the play. His actions make him guilty of both moral and political corruption. His original corrupting of Bosola is before the play begins and his corrupting of the court is introduced at the beginning of the play. His first specific act of immorality in the play is his affair with Julia. He has allowed himself, a clergyman, to become corrupted morally by a married woman. His vow of celibacy has been forgotten so he can satisfy his lusts and desires. Despite all his religious finery he is still rotten to the core with the sickness of corruption, almost admitting to himself that Julia is corrupting him further, that he is ‘sick of her.’

Julia is a common cause for the Cardinal to abandon any semblance of morality. She is used by the Cardinal to torture Antonio after Antonio has his lands taken off him. The fact that the Cardinal had no real legal right to take the lands from Antonio outlines the severity of his political corruption; giving the lands to Julia taints her morally as she has accepted them. They are stolen goods and she has knowingly accepted them. The Cardinal has taken something supposedly pure (the law) and turned it into a tool to cause suffering to Antonio and to please his whore.

Another example of the Cardinal corrupting himself with Julia is his murdering her. Not only does he commit a most tremendous sin but also the manner in which he does it underlines his total deviousness and lack of humanity. Having her kiss the Bible to swear her allegiance to him displays sickening cunning; using an item so heavily connected to truth to deceive and kill pushes the Cardinal to new depths of corruption. He truly is rotten and sick to the core. These deeds are evil.

Together with the Cardinal, Ferdinand manages to heavily corrupt the court. Their spying on the Duchess may seem to have it’s redeeming features, such as they may merely be concerned that she not marry out of lust or that someone marries her for money, but it still involves the corruption of Bosola. The bribes offered to him have made him sacrifice his morality for personal gain; his ambition is exploited by the corrupting influence of the two brothers. It is Ferdinand who is most influential in persuading Bosola to take the job as spy.

Ferdinand’s reasons for seeking to spy on his sister and keep such a strong hold over her affairs are unclear. His use of crude innuendo to her, for example his claim that “…women like that part, which, like the lamprey, hath nev’r a bone in’t.” or his parting “Farewell, lusty widow,” hints at some sexual desire for his sister. His emotive outburst when he finds out about her marriage to Antonio is full of pain filled proclaims that he would “have their bodies burnt in a coal-pit, with the ventage stopp’d, that their curs’d smoke might not ascend to heaven. Or dip the sheets they lie in, in pitch or sulphur, wrap them in’t, and then light them like a match; Or else boil their bastard to a cullis, and give’t his lecherous father, to renew the sin of his back.” His anger reflects the sexual desire he has for his sister; his jealousy of Antonio is murderous. His incestuous desires may be an indication of moral corruption but is more likely a symptom of his being mental corrupt.

Another potential cause for his determination to control his sisters’ life may also be caused by another type of jealousy; he has a lower social position and so less power than either his sister or his brother. The Duchess has control of an entire dukedom and also a husband to reinforce her position. The Cardinal is a clergyman and quite clearly has major political influence as he can confiscate Antonio’s lands and no one can do a thing about it. Sycophants and subordinates, meanwhile, surround Ferdinand. He may be seeking to dominate his sister in an attempt to reassert patriarchy or he may be seeking to extend his power over the court. This desire for control on it’s own cannot be seen as corrupt however it is achieved through spying and deceit which corrupt Ferdinand morally. He has been fighting to protect his family honour and clung to it as though it were something of great value but has instead tainted it with his corruption and turned it into something hollow and meaningless.

Throughout the play corruption has an affect on almost every character. However there are very few who can be considered to be totally without corruption. Two examples though are the Duchess and Antonio. They are married before they enter a sexual relationship; they neither persecute nor wantonly deceive anyone. This marriage of two innocent people and subsequent birth of a child who hasn’t been seduced by corruption suggest the times may be changing and that the court shall become again a common fountain where pure silver drops flow. Although many of the things in the play have been hollowed because of corruption and can only claim to be pure Antonio and the Duchesses child is.

Corruption in The Duchess of Malfi. (2020, Jun 01). Retrieved from http://studymoose.com/corruption-duchess-malfi-3473-new-essay 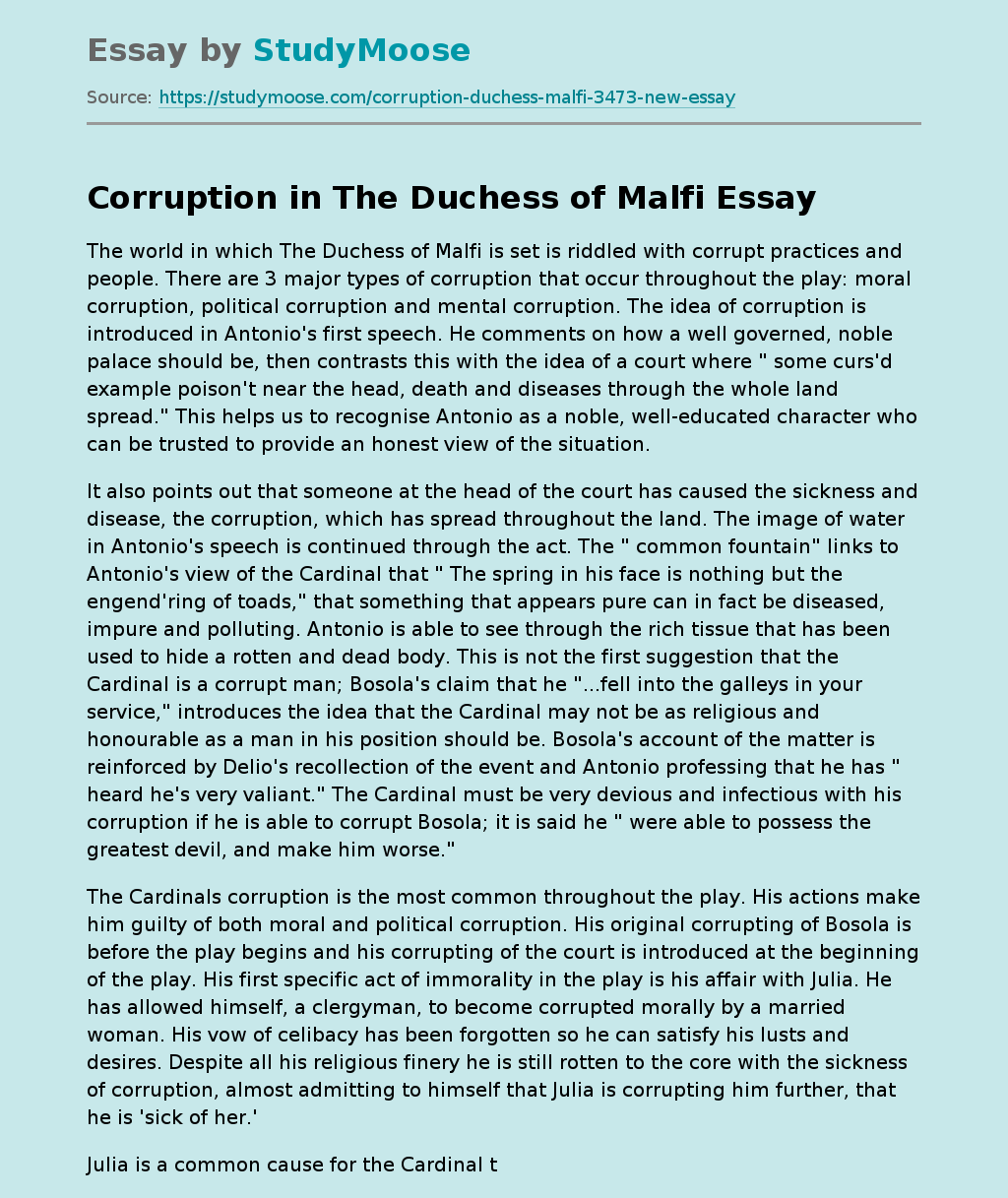