Freedom, as defined by Webster’s dictionary, is “the quality or state of being free: as the absence of necessity, coercion, or constraint in choice or action. ” Throughout time heroes have been icons of freedom and justice. In Kurt Vonnegut’s “Harrison Bergeron”, he depicts equality as not only idiotic, but also unjust. In a nation without freedom, one man rose up and stood up to the restraints and handicaps of an unjust society. That man was Harrison Bergeron. Kurt Vonnegut presents an extremely equalized society that exaggerates the principles to equality.

Don't use plagiarized sources. Get your custom essay on
“ Concept of Freedom in Kurt Vonnegut’s Harrison Bergeron ”
Get custom paper
NEW! smart matching with writer

He is ridiculing America and other nations that strongly believe that equality is a purposeful goal. He portrays men and women in his society to literally be equal. In the Declaration of Independence it is written that “all men are created equal. ” I believe that this statement implies that all men and women deserve the equal opportunities in life and that everyone is able to enjoy the same freedoms.

Kurt Vonnegut interprets it differently. He wrote “Harrison Bergeron” with a different interpretation.

Rather than equality in opportunity and freedom, the story goes to the extreme and creates a society where everyone is literally equal in ability, intellect, and appearance. In the story, Harrison Bergeron is a person with high intellect, exceptional ability, and impressive appearance. As a result he is arrested for being unfair to others. He is trapped by society’s restraints and handicaps. This unjust society punishes people for being exceptional. He escapes from prison and ends up dying in hand with a beautiful ballerina.

His escape lasted only but a few hours. But how did he fight for freedom? Harrison Bergeron was an icon of freedom. His actions portray what is impossible in a restricted society. He danced with a beautiful woman to beautiful music. Thus, showing people the possibilities of a free and unrestricted society. Although his actions were in vain due to the lack of thought and attention span citizens are forced to have. Nonetheless, Harrison Bergeron fought against an unjust society for a freedom that he and every other citizen have been denied. 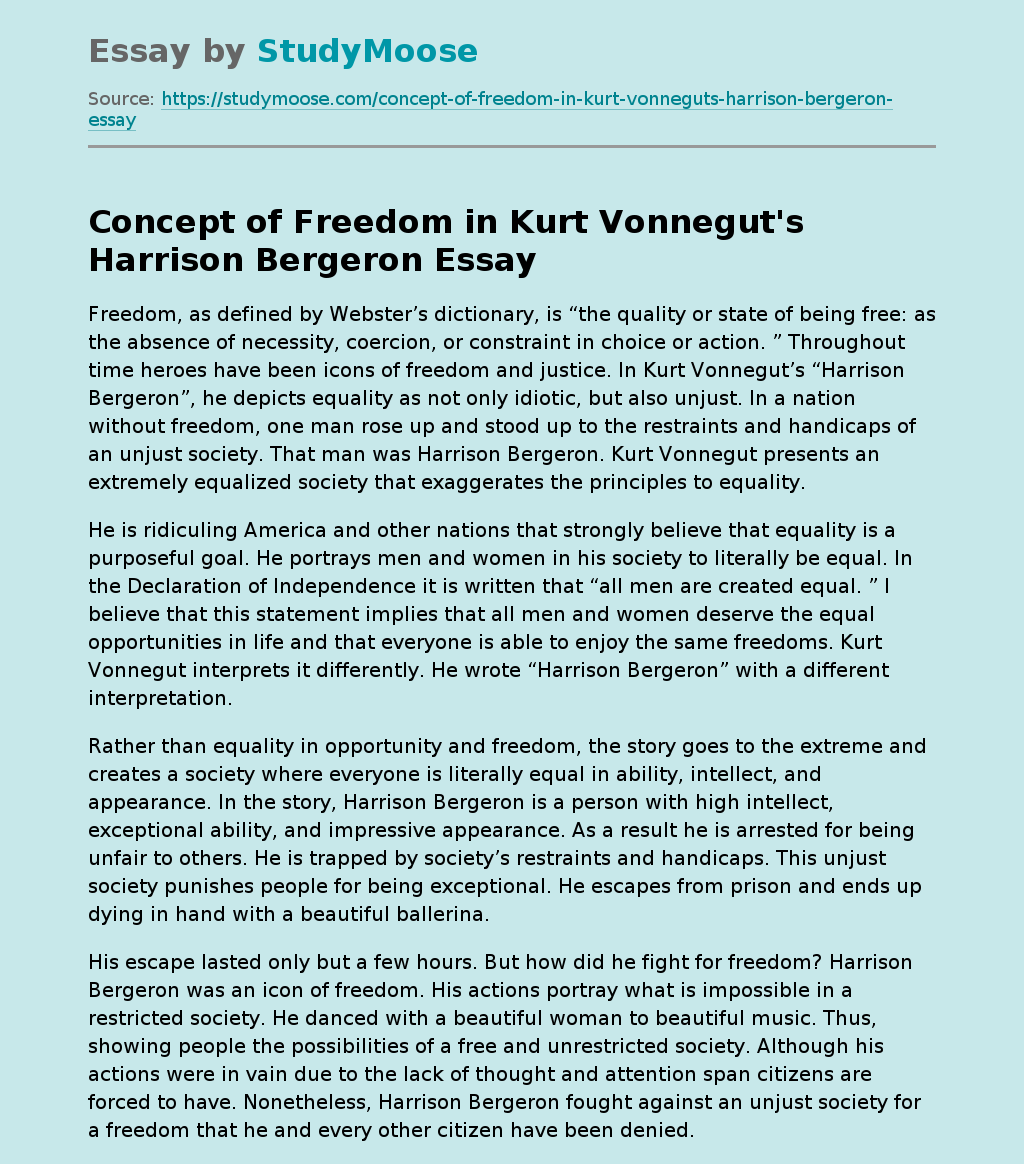