The major focus of this tragedy is on the character of the hero, Oedipus. He is a person of great importance; in fact, the security and health of the community depend upon him. And he has to meet an urgent crisis, something which threatens the continuing existence of the city. And because he is very conscious of his own qualities, he takes upon himself that responsibility. Oedipus, above everything else at first, is a person who acts decisively and who is celebrated for so doing.

Turn in your highest-quality paper
Get a qualified writer to help you with
“ Comparison the characters Oedipus & Odysseus ”
Get high-quality paper
NEW! AI matching with writer

In that sense, Oedipus is like Odysseus, who is also famous for his ability to act and react in an emergency. What is most important about them, however, emerges not from their initial decisions to act but rather from what happens as the conflict they are caught in gets more complicated.

Oedipus has a heroic confidence in his own abilities, and he has good reason for such confidence, both from his sense of past achievements and from the very high regard everyone has of these achievements.

As his situation gets more complicated and things do not work out as he has imagined they might, unlike Odysseus, he does not adapt, change, or learn. He becomes more and more determined to see the problem through on his own terms; he becomes increasingly inflexible. Having accepted the responsibility for saving Thebes, he will on his own see the matter through, without compromise, without lies, without subterfuge.

Oedipus demands from life that it answers to him, to his vision of what it must be.

Throughout the play he is seeking to impose his will upon events. People around him are always urging caution, prudence, even an abandonment of his quest, but to act on such advice would be for Oedipus a denial of what he is. And, as he repeatedly states, he would rather suffer anything than compromise his sense of who he is and how he must conduct himself.

Odysseus is quite distinct. He sees everything and is always prepared to recognize that he has been wrong. He can adapt; that is one of the most attractive things about the story. The reader may know the outcome, what holds him is the expectation of some new revelation about Odysseus’ bag of tricks. What will he do next to get out of this jam? What is he doing to triumph over the suitors? Because he is such an infinitely protean character, the reader knows he is going to discover something new about Odysseus in every episode.

The reader’s sense of Oedipus is very different. He is not going to be any different, he is going to persevere in being exactly what he has been. So there is a terrible fascination with seeing the events unfold, in seeing Oedipus himself become the major motivating force in his own destruction. The force of the play comes from the connection between Oedipus’s sufferings and his own actions, that is, from the awareness of how he himself is bringing upon his own head the dreadful outcome.

Oedipus is doomed, mainly because he is the sort of person he is. Someone else, someone with a very different character, would not have suffered Oedipus’s life. 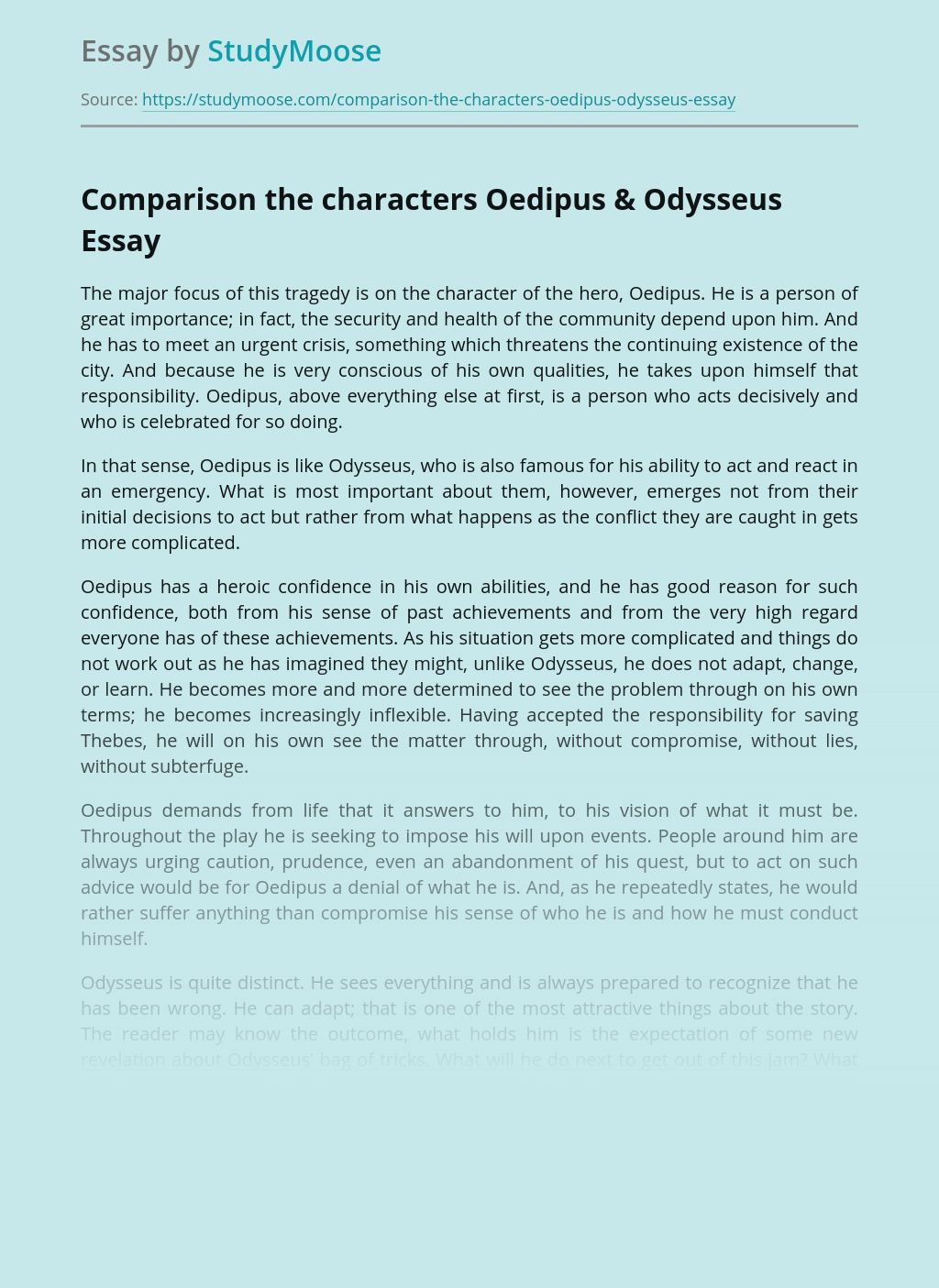 Turn in your highest-quality paper
Get a qualified writer to help you with
“ Comparison the characters Oedipus & Odysseus ”
Get high-quality paper
Helping students since 2015
Stay Safe, Stay Original