A Tragic hero is an exceptional being who posses hartmartia, a tragic flaw, which leads the herp to make fatal mistakes causing the hero to suffer and ultimately lead to their own downfall. Written by F. Scott Fitzgerald, The Great Gatsby, predominantly examines the wealthy young man, Jay Gatsby, and his obsession for Daisy Buchanan, the golden girl of his dreams. Fitzgerald illustrates the Roaring Twenties which encompases the American dream. The play Macbeth by William Shakespeare takes place in Scotland in the 17th Century.

Don't use plagiarized sources. Get your custom essay on
“ Macbeth and Gatsby Characters Comparison ”
Get custom paper
NEW! smart matching with writer

Shakespeare describes Macbeth, the King of Scotland, and his ambition to delve for power. Although both, the novel and the play portray different time periods, the themes of the novel and the play correspond to one another. Fitzgerald and Shakespeare both characterize and distinguish Jay Gatsby and Macbeth as tragic heroes because of their vaulting ambition towards their dreams.

Jay Gatsby and Macbeth are similar as their tragic flaw is their ambition. Gatsby’s dream is to reunite with Daisy, his lost love, and is willing to do anything to attain this dream.

While Macbeth’s dream is to become king and is also determined to do anything to achieve it. Gatsby’s motive in life is to achieve the American dream, which for him consists of wealth, power, and Daisy Buchanan. Daisy refused to marry Gatsby did not have any money nor any status within the society. Upon being rejected by her, Gatsby sought to reinvent himself as a rich man of high status in attempt to court Daisy s approval.

Gatsby achieved this through means of illegal activities such as bootlegging, to attain wealth to attract Daisy’s attention, and throwing lavish parties in hope that Daisy might show up one day. During a conversation between Jordan Baker, Daisy’s friend, and Nick Carraway, Gatsby’s neighbor, Jordan says that, “Gatsby bought that house so that Daisy would be just across the bay” (Fitzgerald 78). Jordan’s declaration assures that Gatsby’s reasons of buying a house is so he can be close to Daisy. This confirms that Gatsby is so determined on being with Daisy, that even though she is a married woman, he still wants to pursue her by being in close proximity to her. Jay Gatsby’s obsession for his superficial love for Daisy exposes his motives as it signifies the great American dream for him. Furthermore, to attain Daisy, Gatsby goes to an extent to protect Daisy and taking blame for her. While in New York, Tom Buchanan Daisy’s husband, switches cars with Gatsby on the way home. Daisy drove the car while Gatsby sat in the passenger seat. Earlier, Myrtle, Tom’s mistress, saw Tom driving the same car. Assuming it was his, she ran out to the ran out to street and tries to stop the car. Daisy could not control the car, resulting in the death of Myrtle. Gatsby became so obsessed with the notion of the American dream and the notion of being with Daisy, he is willing to take the blame upon himself. When Nick asks if it, “Was Daisy driving?” Gatsby replies, “Yes,” he said after a moment “but of course I’ll say I was” (Fitzgerald 137). Gatsby takes the blame, so Daisy does not get in trouble. His ambition to attain Daisy is so great, he saves her so she does not face consequences, and in order for her see what Gatsby would and could do for her. Gatsby is so fixated on having Daisy, the American dream, he did not comprehend what occurred. Gatsby only spoke as if Daisy was the only thing that mattered. This shows that he is more concerned about his feelings for Daisy than the fact Myrtle has just been killed. Jay Gatsby’s obsession was his love for Daisy. The love and ambition drives his persistent pursuit for Daisy’s attention on his tactics to ‘win’ her back from her husband Tom. It is clear Gatsby will do anything to attain the American dream to win Daisy over with his materialistic possessions and status. Gatsby is so eager to attain this ambition that he is ready to risk everything. Both Gatsby and Macbeth spend their lives chasing an impossible dream because of their ambition.

Macbeth is shown to have great ambition as he longs for power, after finding out about his prophecies of becoming king. Macbeth proposes horrible ideas, for example the murder of Duncan, King of Scotland. Macbeth is fully aware of what is morally right and wrong, yet he chooses his desires over his honor. The three witches greet Macbeth by hailing him and appraise him of his prophecies. They state that from the stance he is currently is in now, he will soon become and later King of hereafter. This is the start of where his ambition and aspiration to gain power and position develop. Macbeth chooses to see what he wants to see and ignores the rest. His mindset is put forth in attaining the position of many thrones, even if the prophecies may lead him to a destructive way. Macbeth tells himself, “Two truths are told/ As happy prologues to swelling act/ Of the imperial theme” (Shakespeare 1.3.127-129). The two truths: Throne of Cawdor and Glamis, are the positions Macbeth already obtains, and the imperial theme is the promise of more positions and thrones. This reveals Macbeth’s ambition as he wants to become king and gain full dominance. This foreshadows that it is possible to be king since two of the truth have come into reality. It seems that when Macbeth gets the taste of power and strength that comes from being king, he cannot see anything else as he is obsessed in securing his kingship. This is similar to Gatsby because when Daisy rejected Gatsby, as he did not see anything but her. He moved across the bay from her, and started doing illegal activities to gain wealth and status to attract Daisy in hopes she would go back to him. Gatsby became so obsessed with his American dream, Daisy, that he based his whole life around her. Moreover, Macbeth to takes the prophecy and its matters in his own hands by committing murder to achieve his dreams and desires. Macbeth and his wife, schemed to kill the King of Scotland, in their own home, and betray the trust the king has put in Macbeth. He tells his wife, Lady Macbeth, “I am settled and bend up/ each corporal agent to this terrible feat,/ Away, and mock the time with the fairest show,/ False face must hide what the false face heart doth know” (Shakespeare 1.7.78-82). Macbeth’s allusion to his strength and power gives an idea that he is prepared to kill King Duncan. He approves of his wife’s plot as he is ready to do whatever it takes to fulfill his ambition to become king. He begins to trade humanity for the sake of his ambition. Macbeth’s motive for killing King Duncan clearly shows vaulting ambition. This is similar to Gatsby because he wanted to have Daisy so much he would do anything for her, including taking blame for Myrtle’s death, for which George Wilson, Myrtle’s husband, killed him for. Gatsby did not seem to care of anything but Daisy, as he did not even give care of the death of another women. This lead Gatsby to spend his life chasing a dream that is impossible, which ultimately leads to his death. Like Gatsby, Macbeth did not see anything but his desires: power, status, and the throne. To him those were the things that mattered to him the most as he spent his whole life trying to attain and protect his desires. He sacrifices everything to achieve his ambition his close friend, Lady Macbeth, and in the end his own life. His aspirations caused the reversal of fortune from a noble person, to a man that was driven by ambition, who eventually died trying to keep his titles. Both Gatsby and Macbeth changed their fortune from happiness to misery led by their hubris and ambition.

The Great Gatsby written by F. Scott Fitzgerald and Macbeth by William Shakespeare both express a character that is a Tragic Hero because of their aspirations and downfalls. Gatsby and Macbeth display many characteristics of a Tragic Hero, as they both have an ambition for their dreams. Although, Jay Gatsby and Macbeth are driven by distinct desires and come from different time periods, their goals encompassed every idea and pushed themselves beyond their limits. Gatsby and Macbeth did not care who would suffer for their actions or who would pay for their mistakes. They were both caught up on fulfilling their goals due to ambition, they lost themselves. Climbing one’s way towards a goal is essential, but being fixated and obsessed on a can may lead to affliction. 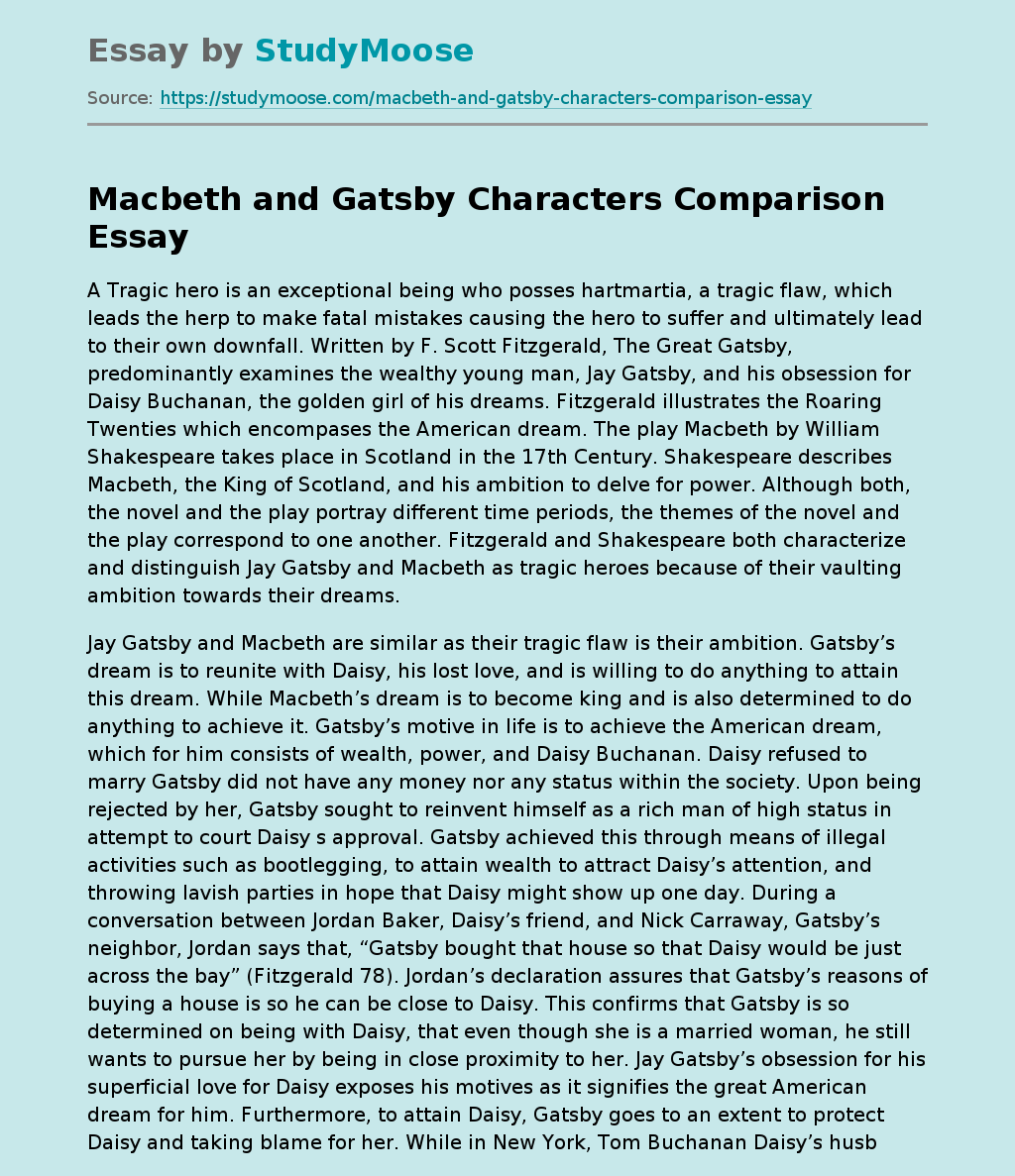