Comparison between Oedipus Rex and the film Into the Wild

One needs to understand to accept the truth. For if it is denied, there is nothing to do, but suffer, as denial of the truth can lead to devastating consequences: “How dreadful the knowledge of the truth can be”. This quotation by play writer Sophocles demonstrates that the truth can torment people. As painful as it appears, there is no avoidance. The Sophoclean tragedy is a model, which exhibits one major cause of human tragedy; hubris. People are only able to see the truth when they throw off their blindness of bias and prejudice.

Don't use plagiarized sources. Get your custom essay on
“ Comparison between Oedipus Rex and the film Into the Wild ”
Get custom paper
NEW! smart matching with writer

Such is the case in Oedipus Rex and “Into the Wild”, where the protagonists in both are unable to accept the truth and thus leads to their downfall.

Similar to a Sophoclean protagonist, Oedipus is oblivious to the truth; the shame that he murdered his father and married his mother. Oedipus is viewed as an intelligent king, who was expected to comprehend the clues Tiresias brought to him about the truth-but he remained ‘blind’ to penetrate it.

He is a brilliant and confident man, which is why Tiresias believes that Oedipus would have known the truth. However, since Oedipus did not understand it, Tiresias dropped many clues, anticipating that Oedipus would solve it. Oedipus remained ‘blind’ to penetrate the truth, despite that Tiresias leads him to the truth. Once Tiresias proclaims the truth, Oedipus is not in the circumstance to accept it. As he was in denial , he ended up displaying anger towards Tiresias: “…You have no power or truth.

Oedipus is in a phase where he denies the truth, because he fears to accept it. Ironically, Tiresias, the physically blind prophet has the ability to recognize the truth, whereas Oedipus, who is not blind, is unable to not see it, but also face the consequences of his mistake. Preoccupied with solving the murder of Laius and maintaining his status, Oedipus remains ‘blind’ towards his prophecies. He only truly understands the horror of the truth and blinds himself with Jocasta’s broach. He leaves Thebes, becomes an outcast, abandons his kids and sets foot on to a new journey blind and alone. Oedipus’ downfall is a result of his denial of the truth, and his refusal to take responsibility for the welfare of his citizens.

“Into the Wild” is a biographic film, based on a true story; about a young man who travels to Alaska, with the assumption that he could live ‘in the wild’. The protagonist, Christopher McCandless, is an intelligent, university graduate, who decides to live isolated because he wants to find the truth-the meaning of life. “… rather than love, than money, than faith, than fame, than fairness… give me truth.”(ITW). As a bright man, he believes that he knows how to survive in the wild and assumes that he could. He foolishly deceives. McCandless wants to be different and wants to do something entirely new, that no one else has ever done. He doesn’t understand that he cannot live isolated from society.

Throughout his journey, he encounters many people, who are comparable to turning points in his life. Every person he meets advises him to turn back and head back home. He hears several warnings from them, but is not willing to face reality. He was ‘blind’ to take their advice and admit that he is heading on the wrong path. When he finally reaches Alaska, two years later, he realizes that things weren’t working out for him the way he expected. He was facing difficulties, such as shortage of food, and weather disruptions. As time goes by, he begins to understand that he is not able to live in the wild. As he attempts to return back, the river that he needs to cross has become wide and violent, leaving him stranded. At that moment, he realizes that he is trapped and has no choice but to live isolated. With no food, his vegetation is completely relied on plants, and decides to eat them. He confuses similar plants and becomes poisoned, and as a result, is on the verge of dying. He instantly understands that he has made a mistake and as a result is dying alone, which becomes his downfall. Prior to his death, he imagines himself returning back to his family and reliving his life. “Happiness [is] only real when shared” (ITW). Once he accepts the truth, it is too late and dies.

One cannot hide from the truth. The best way to deal with it is to accept it and face its consequences. Being in denial has been something that has led to catastrophe and created their downfall. People with addiction problems deny that they have a problem and are hurting others and themselves. The Sophoclean model portrays the lives of both protagonists and presents how their downfall is due to them not facing and accepting the truth.

Comparison between Oedipus Rex and the film Into the Wild. (2020, Jun 01). Retrieved from https://studymoose.com/comparison-oedipus-rex-film-wild-new-essay 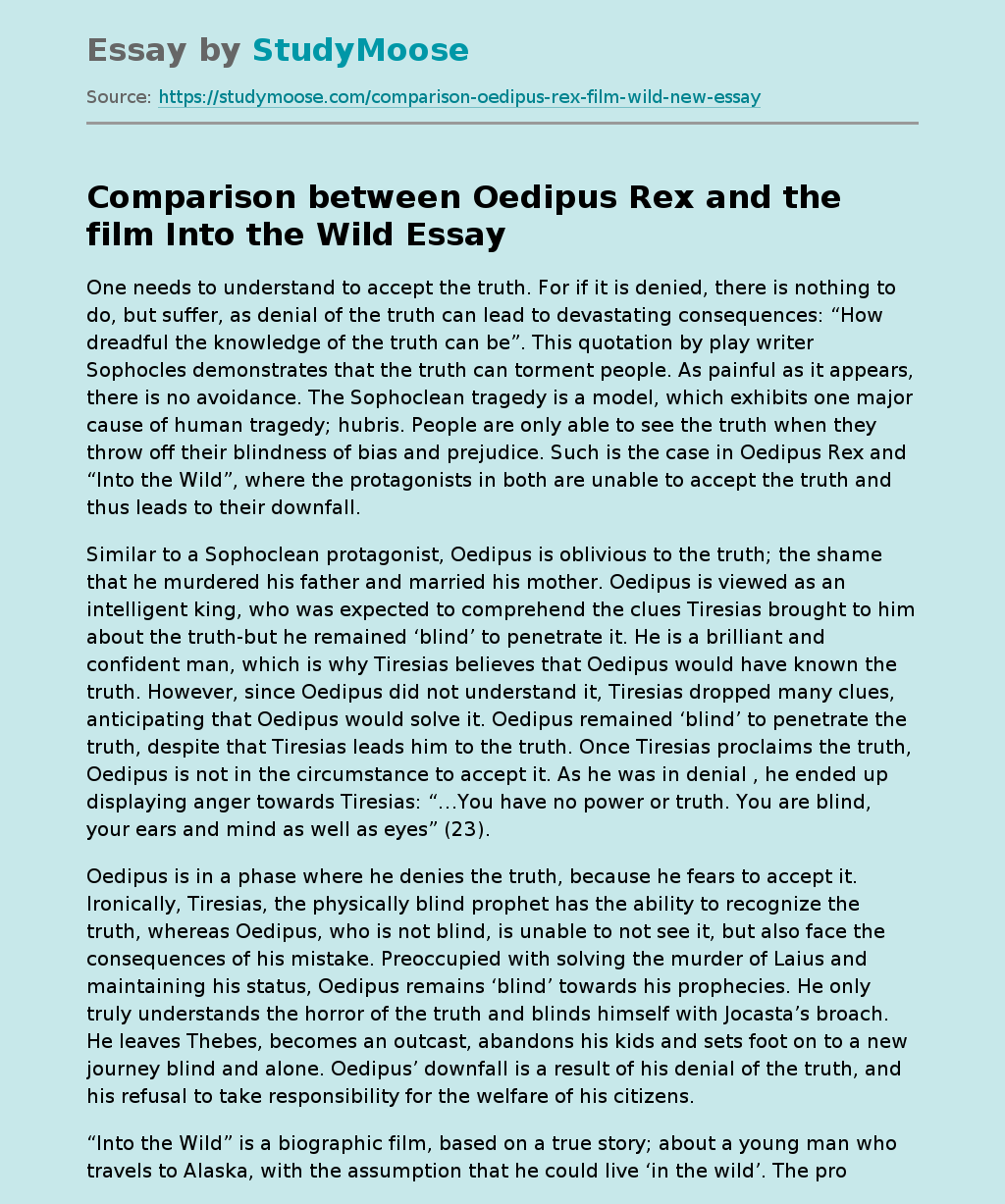