Comparing Sleeping Eros and a Stele of a Little Girl

Joyce Salame Art History Paper Whether in the fifth century B. C. E or the first century C. E, Greek art has maintained continuity among its theories since its inception. Throughout history, the Greeks have been perfecting their human sculptures. The Metropolitan Kouros (600 B. C. E) and the Spear Bearer (450 B. C. E) are made centuries apart but have the same Greek interest of the human anatomy. However, because of the time difference, it is clear that the Spear Bearer is more advanced.

Don't use plagiarized sources. Get your custom essay on
“ Comparing Sleeping Eros and a Stele of a Little Girl ”
Get custom paper
NEW! smart matching with writer

The same idea goes to the marble grave Stele of a Little Girl (440 B. C.

E) and the bronze statue of Eros Sleeping (1st century C. E). They share many similarities such as the Greek touch; conversely, they have their differences. The two sculptures, Stele of a Little Girl and Eros Sleeping, are two Greek sculptures that have survived throughout history and are now located at the Metropolitan Museum of Art in New York City. Although the sculptures represent different things, they complement each other in many ways.

They are both sculptures of a child and display child-like peacefulness but at the same time have adult like characteristics.

The marble grave Stele of a Little Girl, which is similar to a present day tombstone, is a 31 and a half-inch Classical Greek Sculpture made in 450-440 B. C. E. This stele is built from marble because it was found in Parlos, a Greek island, where marble was plentiful (metmuseum. org). The fact that the stele is a relief sculpture makes the feeling it brings out more tense and serious.

During the Classical Greek time, the picture in the stele would represent what the person who died looked like. Greeks identify people by gender and age. This stele is one of a young girl.

Her clothing is unbelted making it open on the sides, which reveals her stance. She is standing with one leg bent, which shows a naturalistic form of movement. Moreover, her mouth is curved down into a frown while her head is bowed. This characteristic gives her a very serious face that is unusual for someone so young. If it weren’t for her young looking body, one might think she is an older woman. Another important detail is that she is holding two doves. She holds one tightly and protecting to her chest and the other in her left hand. The dove that is held tightly to her chest might symbolize her life.

She could be holding the bird protectively as if the bird flies away, so would her life. The beak of the bird is slightly touching her lips, which might also suggest that she is kissing her life goodbye. Another thought about the beak touching her lips could be that because a dove symbolizes peace, her lips taste the freedom as she now enters her everlasting, peaceful rest. In the Classical Greek time, many of the steles would have the child’s favorite pet. In this case, the girl’s favorite pets might have been her doves. Perhaps the sculpture of the girl holding the two birds is simply a farewell to her favorite pets.

Because of the time duration, the dove in her left hand is missing its head. However, looking closely, the viewer can notice that the neck of the dove is turned back to face the girl. Possibly, if the head was still there, the dove would be looking back to say farewell as well. The Stele of a Little Girl’s timelessness relates to the bronze statue of Eros Sleeping. Eros Sleeping is a 33 and 3/8-inch statue from the Hellenistic period, first century B. C. E. It is a sculpture of baby Eros, god of love, sleeping on a rock. The rock on which he sleeps is a modern addition, but the original was most likely made of stone (metmuseum. rg). A sculpture of Eros as a baby is interesting because he looks very peaceful as opposed to his unkind reputation. The sculpture makes Eros seem innocent and allows the viewer to solely see him as the god of love without the complications he causes. Eros is a freestanding sculpture making him look more relaxed and casual. He lies on the rock, disarmed and exhausted looking. It is clear he is exhausted because it seems as if he is in a very deep sleep since is arms and legs are hanging over the rock, his hair is tousled, and his mouth is open.

One can almost imagine the drool coming out of his mouth. Most importantly, it gives the illusion of a sleeping baby lying nude after days play. This illusion comes from his worn out sleeping position, chubby arms, and his curls spilling over his head. This statue is different than the typical Greek style because of the baby’s proportions. Greek art celebrates the perfection of human anatomy. Most Greek sculptures, especially ones of gods, show perfection in the muscles and cuts in the body. On the other hand, this sculpture shows the opposite.

There aren’t any muscles shown in the baby Eros; in fact, the creator emphasized on presenting Eros’s big belly. With one arm hanging over his body, the sculpture’s belly has a stomach roll. In addition to that, his belly button looks like it is hidden and misshaped in all the chubbiness. As much as the Greeks loved to portray the natural human body, presenting a person with the perfect muscular body is the opposite of natural. The shape of Eros’s body in this sculpture shows a great achievement for the Greeks to depict a more realistic body.

The Stele of a Little Girl and Sleeping Eros are very similar. First off, the obvious, they are both sculptures of children. Both of these sculptures didn’t have to be of children, yet, their creator chose to do so. This fact causes the viewer to feel more emotional towards them. There is something about a child upset or peacefully resting that brings out a certain sentiment. If the stele was of an older woman, sure it would be sad, but it wouldn’t be as sad; for instance, it wouldn’t feel as heartbreaking to watch a woman say farewell to her birds as it would to see a child do so.

Parallel to the stele, it wouldn’t be as sweet and attractive to see a grown man sleeping on a rock in the same way as it would to see a baby. Creating children in these sculptures was a decision the creators made to allow their sculptures to reach out and touch the hearts of the viewers. Another similarity is that although they are children, they each have a characteristic that is similar to one of an adult. For example, in the stele, the little girl wears a frown and her head down in sorrow. Her serious face is unusual for someone presumably so young.

When most people think of children they see them as happy and carefree. The stele shows a child who knows the worries of the world and understands the reality of it. Like the girl, Eros also shows adult like characteristics, however, instead of on his face; they show in his hands and legs. Despite his chubby stomach, arms, and face, Eros’s legs are strong and firm. Plus, his hand seems to look like a hand of a man because one can notice that his hand is one that worked hard. He also seems to be able to control where his fingers lie as opposed to the usual fist a baby holds.

In addition to those similarities, the sculptures both have a smooth surface. This fact seems unimportant because its not like someone could touch the sculptures since they are behind glass. However, these sculptures are smooth as opposed to other bumpy, rusty, and rough sculptures. This is a significant characteristic because they are figures of children. The smoothness in Eros’s belly and the little girl’s face, doves, and feet adds on to the representation of peacefulness. Together with being child statues, the smoothness of the sculptures makes the viewer feel relaxed and peaceful.

It was said that the Sleeping Eros was often placed in gardens, a place to peacefully indulge in beauty. The stele of a Little Girl and the statue of Sleeping Eros are so comparable to each other, it is easy to forget how far apart in time they were made. Although they are centuries apart, and were created for distinctive purposes, they share many ideas and traits. The most important parallel is how they are both statues of children because this fact plays out the rest of the other connections. Although it is unknown who the creators were, it is fair to imagine that one may have inspired the other.

Comparing Sleeping Eros and a Stele of a Little Girl. (2020, Jun 01). Retrieved from https://studymoose.com/comparing-sleeping-eros-and-a-stele-of-a-little-girl-new-essay 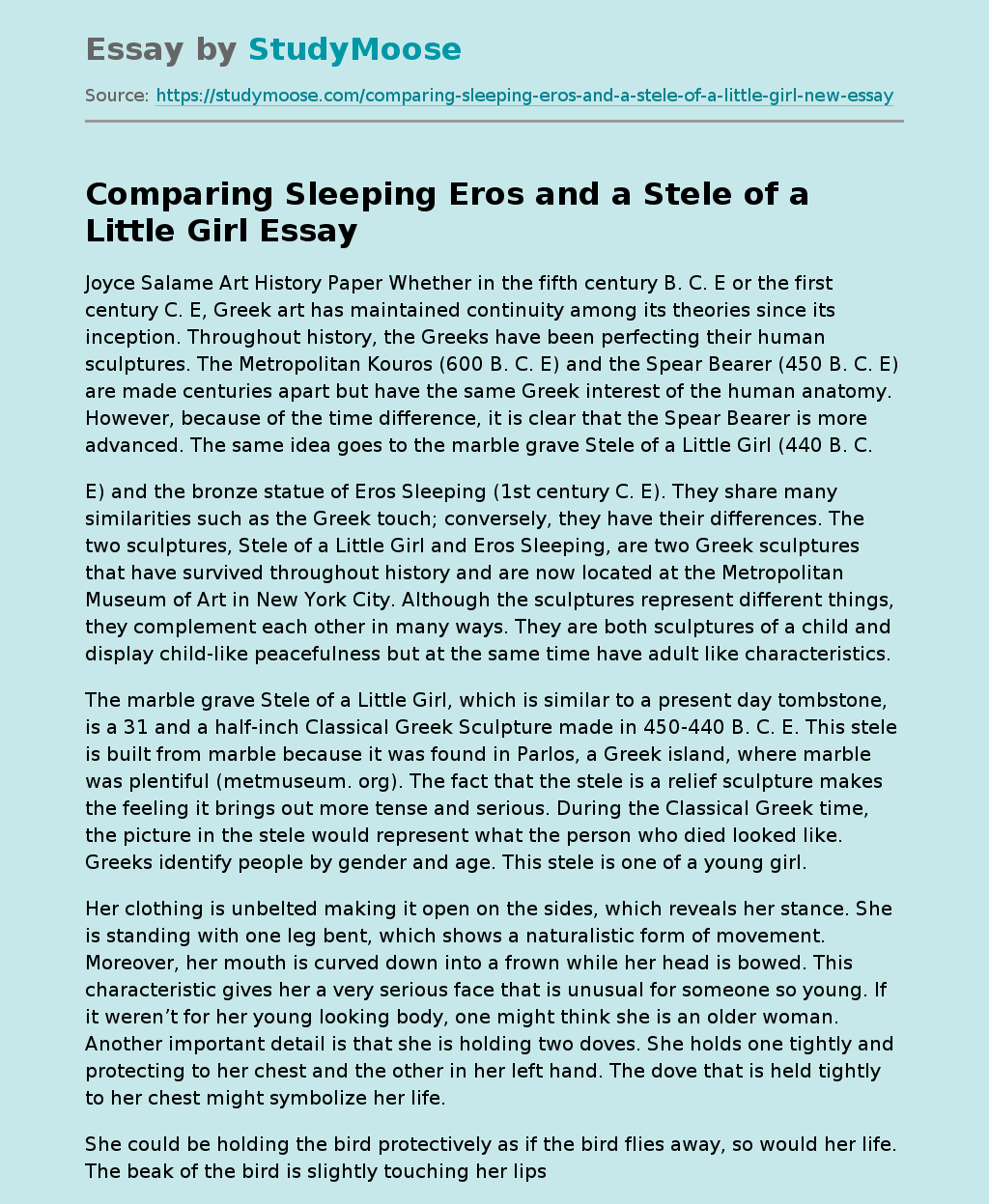