Every little girl pretends to be a princess and prances around imagining a prince charming. Even when they grow up and become a woman, they’re still waiting for that prince to come sweep them off their feet, so they can fall crazy in love and live happily ever after. This fantasy is much because of Walt Disney movies such as “Sleeping Beauty”, “Snow White”, “Cinderella”, “Little Mermaid”, and many others. These stories have been passed down for centuries and numerous versions exist today.

Don't use plagiarized sources. Get your custom essay on
“ Sleeping Beauty vs. Snow White ”
Get custom paper
NEW! smart matching with writer

There are many interpretations of the stories and their meanings that most people don’t even recognize. Though the stories all seem different, some of them still have similar meanings. “Snow White” and “Sleeping Beauty” are two stories that have a common meaning.

Sleeping Beauty and Snow White are both characters that are unrealistically beautiful. Sleeping Beauty for instance, had fair skin, blue eyes, long blonde hair, and an impossibly thin figure. This sets unrealistic standards for female beauty.

Also the stories show a dependence on males for the female identity. The princess is sleeping, just waiting for her prince to come save her so she can resume her place as princess and “live happily ever after”. Snow White was also poisoned and laid sleeping until her prince came to save her. In a way, this is saying that women are simply waiting around for a man to come save them from ordinary life, so that they can have their ‘happily ever after’ ending. Another point that shows up in “Cinderella” is that the stepmother who raised three children on her own, which shows independence, is made the villain of the story, while passive Cinderella is the lovable victim.

In these fairy tales, they show tat a woman is nothing without a man. They give the picture that a woman has nothing to do but wait for her prince, and then once he comes her life will be fulfilled. In today’s world it’s quite obvious that these things could not be more false.

According to Bruno Bettelheim, the numerous versions of “Snow White” and “Sleeping Beauty” represent a young girl growing up and becoming a woman, though it is showed in different ways. In “Sleeping Beauty”, or in Grimm’s version “Brier Rose”, the curse put on the girl by the evil fairy represent new restrictions imposed on a female. It can be interpreted as the beginning of menstruation. The thirteen fairies represent the months of the calendar. The twelve good fairies represent the twelve traditional months of the year, and since there is no thirteenth month, the thirteenth fairy represents menstruation. Also the evil fairy realizes the girl’s potential for becoming the object of desire and out of jealousy tries to prevent the girl from ever becoming a woman.

Further on the representation of the curse as menstruation, there is the King trying to prevent it from happening, because he does not understand it. However, the Queen understands the curse and its importance, being a woman herself, and does nothing to stop it. So naturally when the girl sees a spindle for the first time, full of curiosity, se pricks her finger and falls asleep. The absence of the girl’s parents when she pricks her finger represents the parents’ inability to help children through the various trials of growing up. The King and Queen’s waiting symbolizes the wait for sexual fulfillment. It shows the end of childhood and a time of quiet growth, from which she will awaken mature and ready for sexual union (Bettelheim, 232).

In the tale of “Snow White”, Bettelheim explains how it tells of how a parent (the Queen) gets destroyed by jealousy of her child, who in growing up surpasses her (195). The Queen is not only jealous of Snow White’s beauty in some versions, but also jealous of the love of the father for the girl. They are jealously battling to be the King’s favorite. Since Snow White is more beautiful, she has more power and able to win over her father. Bettelheim uses Freud’s Oedipus complex for understanding the conflicts between Snow White and her stepmother. The King and Queen in stories represent absolute power, such as a parent holds over the child. When the child’s position in the family becomes a problem, they try to escape to start the road to finding themselves. Snow White’s time with the dwarfs represents her period of growth (201). When Snow White eats the apple, the child in her dies, and is left to rest in a glass coffin, which represents waiting for maturity, until her prince comes (213).

Both these stories represent a girl maturing into a woman, and having an older woman jealous of their beauty, trying to prevent them from growing up. These characters have to go through a dormant period of resting, so they can reach sexual fulfillment and awake matured, ready to start a life with their prince. There is also someone in both stories, a male, who does not understand the maturing period, and tries to prevent it. In “Sleeping Beauty” it was the King and in “Snow White” it was the seven dwarfs who tried to help her. This shows that despite a parents attempts to postpone being able to reach maturity at the proper time, it happens nonetheless. 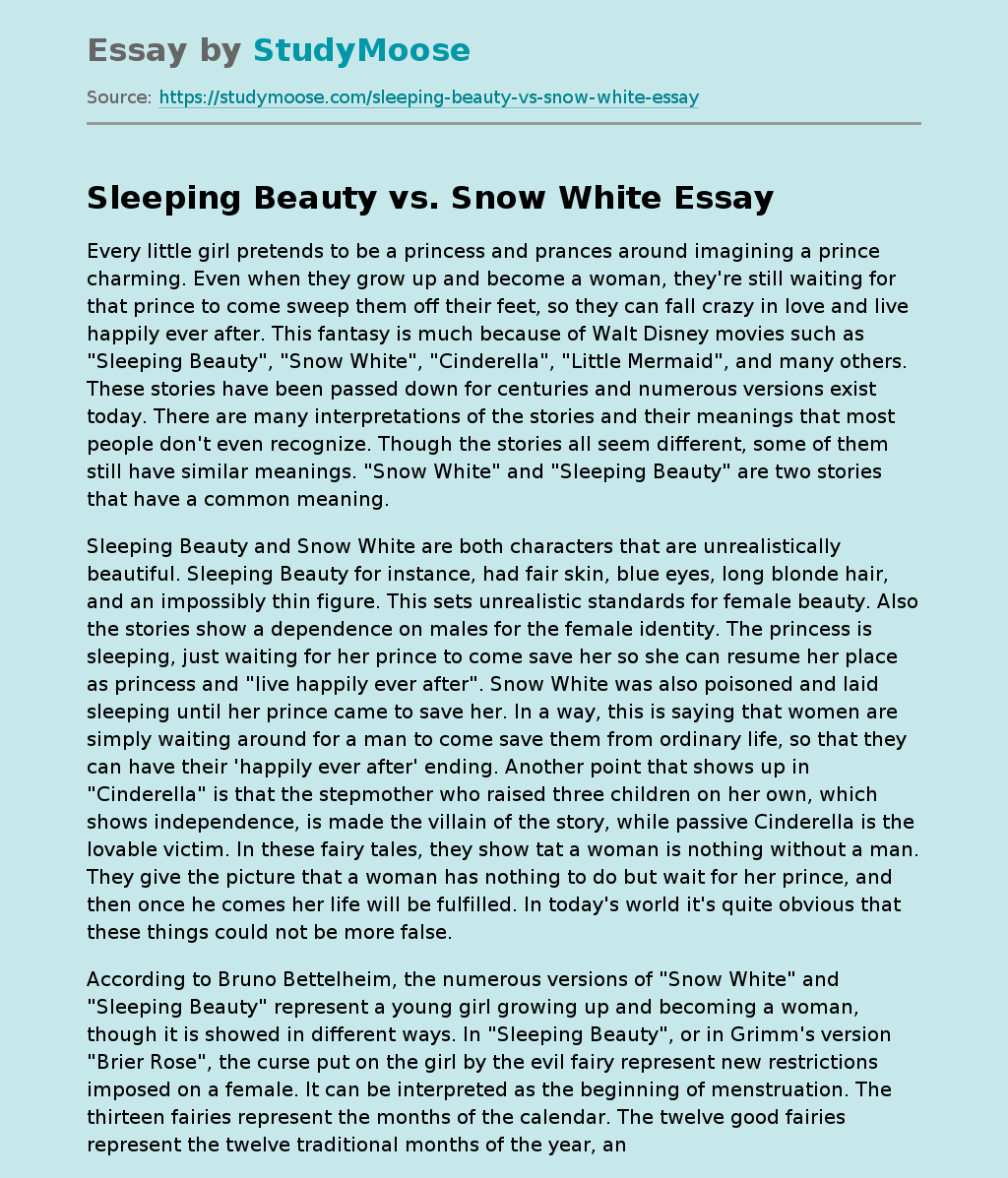