Fairy tales have been around for many generations. They have been read to children all over the world because of how they can relate to children no matter what culture they come from. One of the more well known fairy tales is ‘Sleeping Beauty’. The most commonly known version today is the Disney movie, created in 1959. This movie was based on the Grimm’s version of Sleeping Beauty called ‘Little Brier-Rose’ which was written in 1812 in Germany. Another less known version of Sleeping Beauty is ‘Sun, Moon and Talia’ which was written in 1634 Italy by Giambattista Basile.

Don't use plagiarized sources. Get your custom essay on
“ Sleeping Beauty – Differences between two stories ”
Get custom paper
NEW! smart matching with writer

Both ‘Little Brier-Rose’ and ‘Sun, Moon and Talia’ are classified as Sleeping Beauty stories because they include the components of a typical Sleeping Beauty tale. The main components are a princess cursed to a deep sleep until a nobleman wakes her with a kiss. The characters in the stories may have many differences but the key characteristics that are recognised in Sleeping Beauty characters are still apparent.

One main difference between ‘Little Brier-Rose’ and ‘Sun, Moon and Talia’ is the sleeping princess. The first and most obvious difference between the two princesses is their name. In ‘Sun, Moon and Talia’ the princesses is named ‘Talia’ which is a Hebrew name that means dew of God. In Grimm’s version she is named ‘Brier-Rose’ which is an English name meaning rose within a prickly shrub. The change in names is just a way of making the versions different. The princess in the Grimm’s version is cursed to death by a vengeful fairy that was uninvited to the celebration of her birth.

This curse was softened by the final fairy’s good wish: “It shall not be her death. She will only fall into a hundred-year sleep.” (‘Little Brier-Rose’, Paragraph 4). In Basile’s version the king‘… sent for the wise men and astrologers in his lands, to predict her future …they came to the conclusion that she would incur great danger from a splinter of flax.’ (‘Sun, Moon and Talia’, Paragraph 1).

She is then impregnated by a married king, gives birth to twins, one boy and one girl, and then almost killed by the king’s wife. It’s possible that in the Grimm’s version the fairies were added to the story to create a more child friendly tale. Children, and even some adults, do not know what an astrologer is, so changing the prediction to a curse formed an easier story for children to understand. The content of Basile’s version is viewed nowadays as mature content. When Basile wrote the story it was 1634. This meant that children were told the same stories as adults. The innocence of children was not important in his time and that is why the content of the story is more graphic then in Grimm’s version. Another reason Grimm’s story has this difference could be that in ‘Sun, Moon and Talia’ the antagonist is not introduced until after the princess has awoken. In Grimm’s tale the antagonist is introduced right at the beginning changing the flow of the story. In ‘Little Brier-Rose’ and “Sun, Moon and Talia’ the antagonists are very different. Basile’s version has the antagonist as a jealous wife. She discovers that her husband has impregnated another woman and ‘with a heart of Medea’ (‘Sun, Moon and Talia’, paragraph 8) tries to murder the children and the princess.

Talia falling into a deep sleep was just the catalyst that introduces the antagonist and creates the climax of the story. In Grimm’s version the antagonist was changed to a fairy that was uninvited to the celebration of the princess’s birth due to a lack of golden plates owned by the palace. She walks into the party and yells “Because you did not invite me, I tell you that in her fifteenth year, your daughter will prick herself with a spindle and fall over dead.” (‘Little Brier-Rose’ paragraph 3) After she leaves the palace she is not mentioned again. The story does not explain what happens to her. Some later adaptations of Grimm’s tale have speculated on what may have happened to her but does not come to any conclusion. In ‘Sun, Moon and Talia’ the antagonist is found out by the king and thrown into the same fire she had created for Talia. This story shows that good will always beat evil. The antagonist being killed in the end means that Talia and her family can live without fear of the woman which helps the reader to feel safe. In Grimm’s version she is never heard from again leaving the readers to wonder what happened to her.

The other main character that is different between ‘Sun, Moon and Talia’ and ‘Little Brier-Rose’ is the nobleman or the hero of the story. In Little Brier-Rose the prince arrived at the castle after 100 years and wakes the princess and the palace up with a kiss. The prince walks right into the castle with no danger to him. When he arrived at the hedge “…it turned into flowers. They separated, and he walked through, but after he passed, they turned back into thorns.” (‘Little Brier-Rose’, paragraph 10). The prince was introduced into the story for the sole purpose of waking the palace up. This is very different to the nobleman in Basile’s version. He was a married King that found the palace while hunting. When he found Talia asleep in the palace “he lifted her in his arms, and carried her to a bed, where he gathered the first fruits of love. Leaving her on the bed, he returned to his own kingdom …” (‘Sun, Moon and Talia’, paragraph 4). He had impregnated her and eventually she gave birth to twins who woke her up. When Talia met the king again they fell in love.

The king, at his palace, talks in his sleep about Talia and the children. This created suspicion in his wife which results in him saving Talia from a painful burning death. The nobleman in Basile’s version has more of a role as he introduces the antagonist and the complication of the story. The main characters in the story have many differences but still make up a sleeping beauty tale because of their key similarities. The first and most obvious one is the sleeping girl. A beautiful girl has, for whatever reason, fallen into a deep, death like state. Both girls come from a rich and high class family, they are both found by a nobleman and they both eventually marry the nobleman. Another obvious similarity is that both antagonists are female and want revenge on the sleeping princess. Something about the antagonists that isn’t so obvious is that both of them were mistreated in the first place. In Basile’s version the king impregnates another woman therefore betraying his wife. When she confronted Talia “She addressed her thus, “Welcome, Madam Busybody! You are a fine piece of goods, you ill weed, who are enjoying my husband.” (Sun, Moon and Talia, paragraph 13).

In Grimm’s version the fairy was overlooked by the father and mother of the princess who neglected to invite the fairy to the party She cursed he princess because of this. In ‘Sun, Moon and Talia’ the nobleman was the one to find Talia and, indirectly, wake her from her sleep. In ‘Little Brier-Rose’ the nobleman was also the one to find the princess and wake her up. This makes the nobleman the hero in both stories. In Grimm’s Sleeping Beauty tale, ‘Little Brier-Rose’ we have a princess cursed to sleep by an uninvited fairy and a prince who saves the palace with a kiss. In Basile’s version, ‘Sun, Moon and Talia’ The princess falls into a death like state, is found by a married king and impregnated, awoken by her children and almost killed by his jealous wife. The differences may be due to the time when the stories were written and the inappropriate content for children in Basile’s version but they are both still Sleeping Beauty tales. 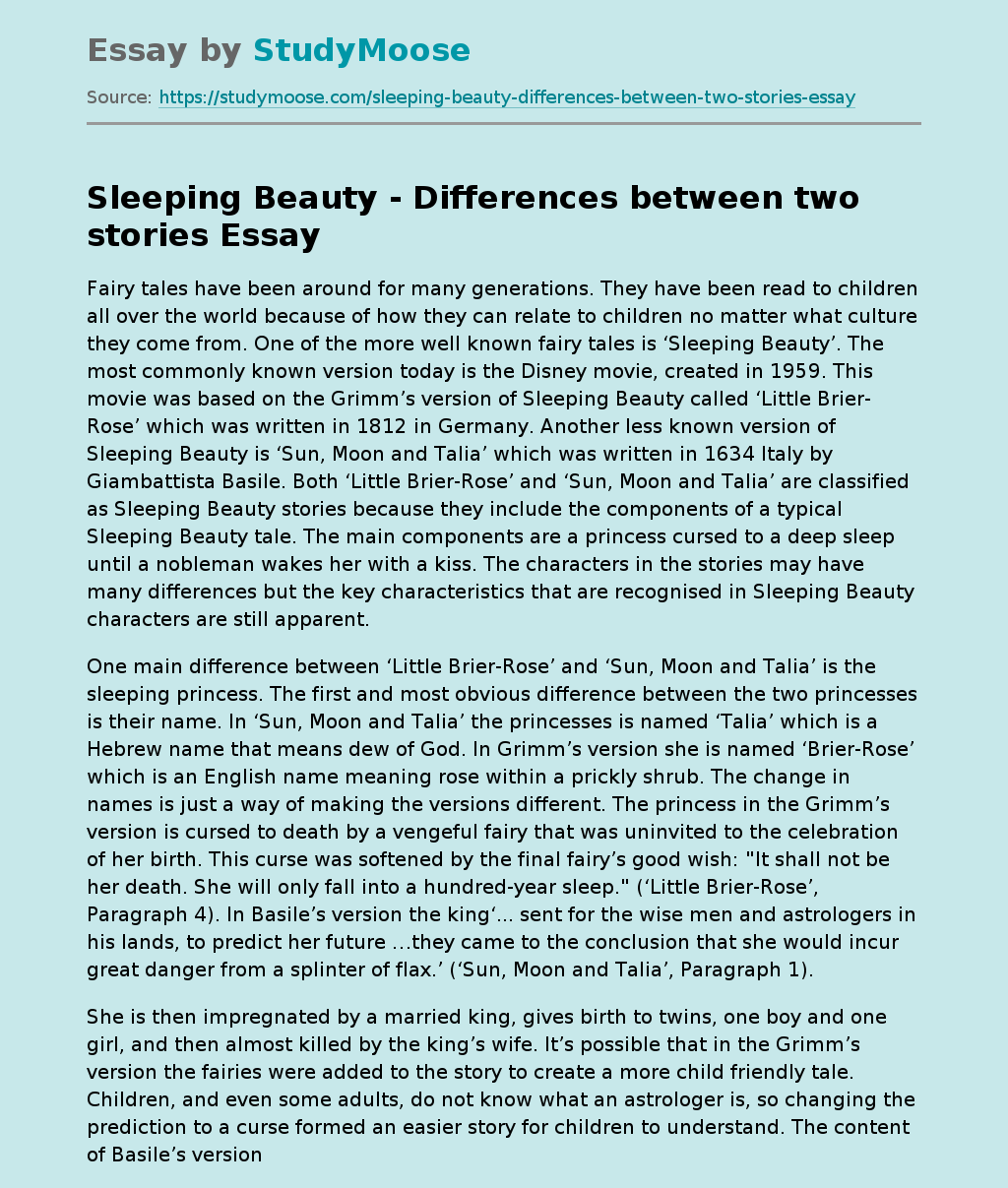