Anasazi and Cahokia Nation
The political, economic, and social aspects of the lives of the Cahokia and Anasazi nations before the European exploration differed greatly, but there are some resemblances. They each have a separate cultures and traditions; separate ways they live their lives. Cahokia was the largest Native American settlement North of Mexico ever established before 1492, where they practiced mound-building and human sacrifice. The Anasazi are the ancestors of the modern day Pueblo people, who lived in cliff dwellings in the deserts of current day New Mexico.

Don't use plagiarized sources. Get your custom essay on
“ Compare and Contrast the Culture of Cahokia to the Anasazi Nation Apush Frq ”
Get custom paper
NEW! smart matching with writer

The political structure and type of governing within these two nations is unalike. The Cahokians had a ranked society, with upper and lower classes. The elite class controlled the workers of the lower class. Civic and religious leaders governed them. These leaders lived in wooden houses atop the flattened peaks of pyramids, and literally looked down on the people they ruled. The Anasazi were unbiased, without well-defined class limitations. They were divided into clans, and governed by the clan elders.

The Cahokians and Anasazians may have cultural similarities, but their political structure is not one.

The Cahokians had more economic advantages than the Anasazi, but both nations managed to thrive. Cahokia was a city of fifteen thousand people, and they were a rich city. Much of their prosperity was due to their frequent trading; they were the center of a trading network linked to a third of the continent. However, both the Cahokians and Anasazians were very resourceful.

They both hunted and forged their own tools.

The Cahokian’s were made of bones, while the Anasazi’s were made of wood or stone. Obviously, both nations were a creative breed. The Cahokians weaved baskets, usually from cornhusks, and most likely used them to transport food. Anasazi people made pottery, and used them to transport water. Cultivated crops and water were both readily available to the Cahokians, but not to the Anasazi. The location of both tribes led to economic differences.

But even though their living situations were different, both cultures were friendly and close-knit. The Anasazi were all equal, but the Cahokians brought each other gifts and traded frequently. The social traditions of these two groups of people lack resemblance in the way they live, but as a community and forming lasting relationships, they share that characteristic.

The political aspects of Cahokia and the Anasazi were at an extreme opposition. The economic situations were dissimilar, location is partly to blame, but both nations conquered obstacles and managed to blossom. Their social structure also differed, but the groups of people upheld strong relationships and friendships with the other members of the community. Although the Anasazi and Cahokia nations were considerably different, some similarities are acknowledged.

Compare and Contrast the Culture of Cahokia to the Anasazi Nation Apush Frq. (2016, Mar 26). Retrieved from https://studymoose.com/compare-and-contrast-the-culture-of-cahokia-to-the-anasazi-nation-apush-frq-essay 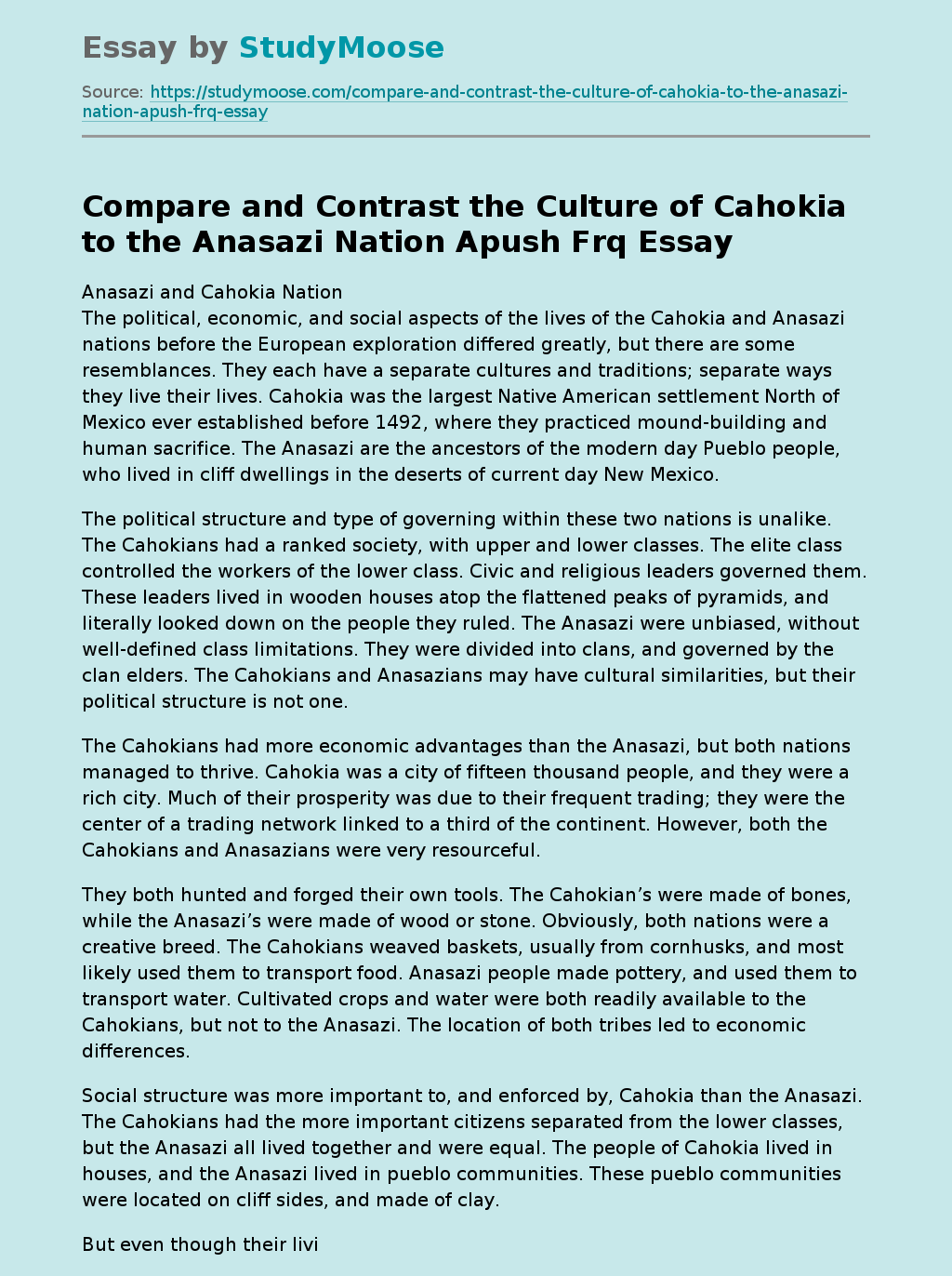