The year of 1945 was a time of relief for America and its people. That year was the end of World War II. Germany had lost and the time for rebuilding was near. However, the peace did not last long between the Soviet Union and the United States. A difference in political and economic views caused a rift in the Soviet Union and United States relationship of convenience. The Soviet Union was running on a system of government called communism. Communism’s theory of a government run by the economy was the complete opposite of America’s dedication to independence.

Don't use plagiarized sources. Get your custom essay on
“ APUSH Containment ”
Get custom paper
NEW! smart matching with writer

This difference caused great tension between the two nations and became a Cold War.

The Soviet Union believed that communism was going to overcome capitalism and that they will win the Cold War.

America’s retaliation to the Soviet Union’s spreading of communism was containment. Containment is the attempt to stop the spread of communism. The Cold War split the world into two large groups, those who were under communist rule and those who were against it.

The United States was dedicated in their fight against communism with instances like the Truman Doctrine, which vowed to support anyone who was being threatened by communist rule, and The Marshall Plan, which gave over 10 billion dollars to European countries in the effort to rebuild the damage done during World War II. By 1947, the United States and Soviet Union were constantly on their toes and pushing boundaries to see who would gain the upper hand in the Cold War.

By the end of World War II Germany occupied by the four major powers and divided into two territories. The three allied forces became West Germany and East Germany was communist. The capital of Berlin was divided between communism and independence. In an effort to test the United States’ commitment to containment Joseph Stalin decided to put up a blockade around West Germany. (Doc B) The blockade prevented all supplies, including food, from getting into Western Berlin.

Because the U.S. was already sending billions of dollars into Europe the Soviet Union felt that they would not get involved in the small confrontation going on. However, the United Sates honored their commitment to the Truman Doctrine and along with help from their allies; America flew in supplies and food to West Berliners for over a year. The Berlin Airlift was a success and on May 12, 1949, Stalin removed the blockade. (Doc B) This act of containment proved that the States kept their word when it came to preventing the spread of communism.

Joseph Stalin and the Soviet Union had their sights set on another territory that they felt could be overthrown, South Korea. North Korea was supported by the Soviet Union while South Korea was supported by the U.S., which meant there was a standoff between the two territories. In 1950, South Korea was invaded by North Korea and the United States vowed to support and protect them. American troops occupying Japan after WWII were sent to support South Korea. (Doc C) A battle on the separating border between the North and South proceed for several years. After continuous attacks and counter attacks the war finally ends in 1953. The resulting borders ended up being very similar to the original borders of 1950. (Doc C) The war caused over 50,000 American deaths but also stopped the Soviet Union from gaining any ground in their goal to spread communism. This act of containment was a success.

Years later on the other side of the world confrontation was becoming unavoidable between the United States and Cuba. In 1959, communist leader Fidel Castro takes control of Cuba. (Doc D) President Kennedy puts support in an invasion of Cuba, known as the Bay of Pigs, but efforts fail and Castro remains in power. In May of 1962 the Soviet Union secretly begins to send nuclear warheads, missiles, and troops to Cuba. (Doc D) The U.S. sees the nuclear missile sites swiftly being put together in Cuba and quickly takes action. Quarantine was placed against all ships carrying weapons and supplies to Cuba. Quarantine is an isolation to prevent the spread of something considered dangerous. The United States was in a constant state of terror during the time of this Cuban Missile Crisis.

By October of 1962, the Soviet Union was already removing missiles from Cuba and the crisis was avoided. A quiet agreement made between the U.S. and the Soviet Union. The United States’ action in Cuba demonstrates the policy of containment because they used all resources available to prevent any type of communist revolt by Cuba from happening. In conclusion, containment was the United States effort to stopping the spread of communism. In every form of it the U.S. was successful.

This is why containment was such a good theory for us. It was a non-aggressive way to fight Communism. Since we used containment, the Soviet Union was less tempted to bring out nuclear and other weapons of mass destruction. The Cold War would have become a “hot war” very quick if they forced the issue of containment. The policy was set up to serve the purposes of stopping Communism, not starting a massive war. Which kind of war is better: a massive attack resulting in thousands of dead soldiers or a long, drawn out war? The most logical answer is the long, drawn out war, which is exactly what the Cold War was. It was not a war to “fight to the death.” It was a war of do as you please but keep it within your own nation, or come through us. 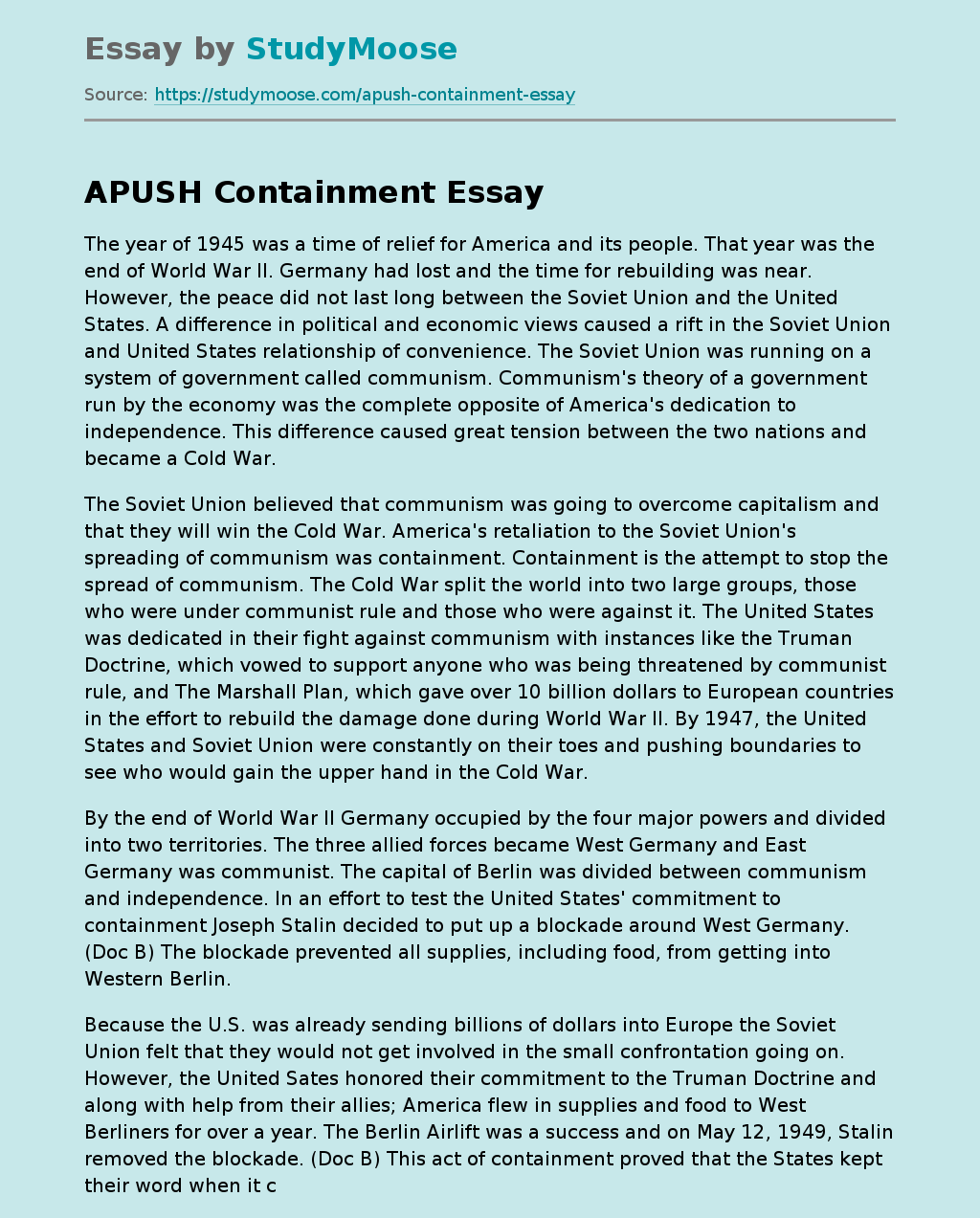