Colonial unity and identity in America

In the early colonial days, there was absolutely no colonial unity. The colonies actually saw themselves as rivals, competing for land and trading rights. This left them defenseless against attacks by the Indians and the French.

The first attempt at creating colonial unity was made by Benjamin Franklin in 1754, after the start of the French and Indian War.

Don't use plagiarized sources. Get your custom essay on
“ Colonial unity and identity in America ”
Get custom paper
NEW! smart matching with writer

This was called the Albany Plan. The Albany Plan called for an intercolonial government with the right to tax, pass laws, and supervise military defense. Seven of thirteen colonies were represented. To further his cause, Franklin published a cartoon in the Pennsylvania Gazette. The cartoon showed eight disjointed pieces of a snake, each labeled with a colony. The phrase “Join, or Die” was written at the bottom, illustrating the fate of the colonies if they failed to unite against the French and Indian threat.

The colonies felt it did not give them enough independence, and as a result the Albany Plan was not approved by any of the colonies, demonstrating the lack of colonial unity at this time.

During the French and Indian War, British General Loudon often asked the colonies for troops and money to support the war effort. The colonial response was sporadic and uncoordinated because they were not yet unified.

The Stamp Act of 1765 sparked colonial outrage because it was the first direct tax on the colonies for the purpose of raising revenue.

Patrick Henry passed a resolution protesting all taxes, and seven other colonies would pass similar resolutions.

The Stamp Act Congress was called in 1765 to protest the Stamp Act. Leaders from nine of the thirteen colonies were represented. This meeting brought an end to most colonial distrust. The colonies no longer viewed each other as rivals, but allies.

After the failure of the Stamp Act, Parliament debated how America should be governed. Edmund Burke, who often supported America, scoffed at the proposal of governing America “like an English town which happens not to be represented in Parliament.” He goes on to say that nature will not allow America to be lumped into the “Mass” of Great Britain. Here, he indicates that the Americans have gained an identity all their own, and are no longer identified as British subjects.

However, there was still a lack of unity in the Southern colonies at this time. The Carolina Regulators wreaked havoc in North and South Carolina, which showed the beginning of a conflict between western frontiersmen and the eastern colonial elite that would last until after the Revolution. The Regulators were western Carolina farmers rebelling against the oppression of the eastern aristocracy.

A series of letters published by John Dickenson entitled “Letters from a Farmer in Pennsylvania” inspired opposition to the Townshend Acts of 1767, and were reprinted in all 13 colonies. These letters helped spur unified resistance to the Townshend Acts in the form of non-importation agreements, more commonly known as boycotts.

In response to the Dickenson letters, the circular letter was written by Samuel Adams in Massachusetts. It also called for unified resistance to the Townshend Acts, and was significant because it showed that the New England colonies were at least somewhat unified with the Middle colonies on this issue.

In 1772, the Gaspee, a British ship, was harassing colonial merchant ships and enforcing the Sugar Act of 1764. Outraged colonists burned the ship, and were sent to England to be tried, where they were sure to receive a much harsher punishment than they would in the Americas. This undermined colonial attempts at self-government, and thus damaged the unity of the colonies.

Samuel Adams founded the first Committee of Correspondence in Boston in 1772. All 13 colonies had these committees. They functioned like newspapers, and were sent to all the colonies.

Prior to the First Continental Congress, Richard Henry Lee wrote a letter to Arthur Lee stating that the colonies were almost completely unified against the oppression of the British “Ministry.” He goes on to say that the colonies are “most firmly united and as firmly resolved to defend their liberties.” He was incorrect in his assumption. Statistics would later show that, at the time of the Revolution, only a third of Americans were patriots, while a third was neutral, and the other third remained loyal to Britain.

The famous Tory preacher Mather Byles represented the Loyalist side of the story. He asked, “Which is better, to be ruled by one tyrant 3000 miles away, or by 3000 tyrants not a mile away?” Feel-good history allows people to believe that all the colonists were patriots, but this is simply not true. Some historians even say that the patriots were only a tiny minority of eastern merchants who duped poor western farmers into fighting for the merchants’ cause. In this sense, there was never colonial unity until the U.S. Constitution.

The New England, Middle, and Southern Colonies all came to the aid of the city of Boston as a result of the Boston Port Act of 1774, which was a result of the Boston Tea Party in 1773. From Connecticut down to South Carolina, the colonies sent supplies or money to sustain the Boston economy while the port of Boston was officially closed. This showed that the rebellion was not just in the north, but all down the coast as well.

The First Continental Congress was called in 1774 in response to the Intolerable Acts. The only colony not represented was Georgia, because it still felt somewhat disjointed from the rest of the colonies. Committees of Safety were created as part of the Congress. They were continental assemblies for the purpose of enforcing the boycott of British goods and publicizing the names of those who violated the boycott. These were big steps in colonial unity, though it was not yet achieved.

During this time, the Americans, as a result of their constantly diversifying European, Indian, and African heritage, were splitting farther and farther from Britain and developing an identity all their own. In his Letters from an American Farmer, Hector St. John Crevecoeur writes that Americans are a “strange mixture of blood which you will find in no other country.”

In 1775, the Second Continental Congress met in Philadelphia. All 13 colonies were represented. They met mainly to make preparations for war with Britain, but they did not meet to declare independence. Even this late, they did not intend to seek independence until Britain essentially forced them to do so through the Prohibitory Act. George Washington was appointed Commander-in-Chief of the Army.

Despite the apparent success of the Second Continental Congress in unifying the colonies, it was relatively ineffective, and the colonies were still not completely unified at the time of the Revolution.

Colonial unity and identity in America. (2016, Jun 21). Retrieved from https://studymoose.com/colonial-unity-and-identity-in-america-essay 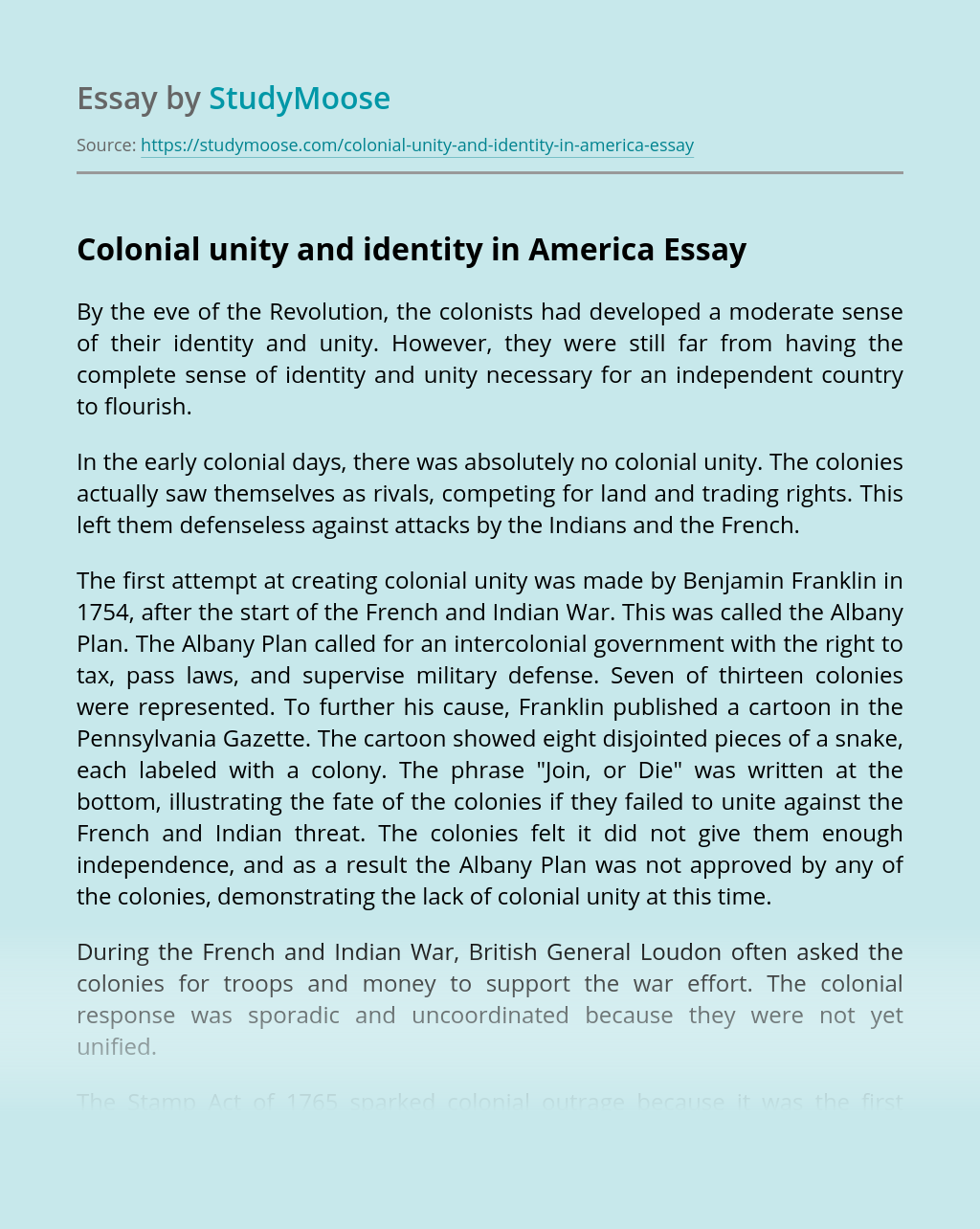