The Collierville High baseball team has always been one of the more successful sports programs in the school’s history. The combination or teamwork, communication, genres, and a set of common goals is partially what makes the team successful. Being a member of the baseball team, I have chosen to use the team as my discourse community for this paper. A discourse community is a group of people that share a common goal, communicate feedback to each other, use genres to further goals, use specialized words known as lexis, and have members with different experience levels.

Common Goals A discourse community is practically brought together by common goals. Being a part of the team is a huge honor between all of the players and coaches. Having the opportunity to go out to practice and play games with a high school varsity team causes most players to want to complete the team’s goals that much more. According to Noah Hattier, a senior member of the baseball team, “We come together as a team in order to get better at baseball and MAKE IT TO STATE!” (Hattier).

The whole team understands that all the hard work they will put in during the off-season and during the regular season is all for the one main goal; to go to Murfreesboro to play in the Tennessee State Tournament. Coach Barry Hiatt is one of the assistant coaches here at the high school and he plays a large role in the leadership of the team.

During our interview, he stated, “Going against some of the best teams in the state shows you just how hard you worked compared to everyone else.” (Hiatt) The off-season is one of the team’s most defining moments. It shows who is going to put in the most effort and who is going to slack off and take the easy way out. Seeing all the effort the team makes, each player wants to push the other to get better for the sake of the team. Another example of a common goal for some of the players on the team is to play baseball at the collegiate level. Noah explains that “The amount of work we put in and the desire for many of us to play after the high school level, preferably in the collegiate level, is what helps us obtain most of our off-season goals.” Playing college baseball is a choice that most players on the high school team choose not to try for.

College baseball tends to lead to more work and practice the older you get. Although only some of the team may go on to play college baseball, it is still an example of a goal that some of the players have inside the team. The combination of effort and teamwork is what makes most of the goals a team sets achievable. Common goals throughout the team is what makes the CHS baseball team a successful discourse community. Besides having common group goals, there are numerous examples of other topics that tie the team together.Lexis Another example of what makes the Collierville High School baseball team a discourse community is a language that is used for the team to communicate. The unique form of communication used on and off the field is referred to as the lexis. Some examples of unique communication used on the baseball field, according to Hattier, are, “Dinger, toothpick and different arm motions are some examples of lexis.”(Hattier) There are different forms of words used to describe different objects on the baseball field. The baseball bat for example can be referred to as “the stick,” or any other random noun the team might come up with in order to make the game more fun.

For the coaches, communication is a huge factor for the success of the team. The coaches have to be able to call all of the pitches the pitcher is supposed throw; all from the dugout. This involves hand signals from the coach to the catcher than to the pitcher. Mastering these signs tend to take a lot of practice and repetition. Also, if there is a runner on base, the coach has to be able to signal the baserunner in order for the baserunner to “steal.” “Steal” is also another Lexis word used in the game of baseball. Coach Hiatt is our normal baserunning coach and excels at teaching all of his players the arm signals when on base. Coach Hiatt on a normal basis will exclaim “Sometimes it is the runner’s job to cause havoc in the pitcher’s mind therefor creating an advantage for the team.”(Hiatt) By mastering different forms of communication, the baseball team learns how to succeed without even saying a word. The team also has many different versions of lexis which is used to make the game more creative or easier.Genres Besides having common goals or lexis, genres are a massive part of how the baseball team functions.

According to Writing About Writing, “a genre is a text that helps facilitate communication between people, and in this example, all communication takes place within the discourse community.”(Branick 388) There are many different examples of how the Collierville High baseball team uses genres similar to a discourse community. I would say that the pitch calling chart would be one of the most valuable pieces of paper that belong to the baseball team. Every year the coaches sit down before the regular season and decide what pitch they want to call in which situation. Depending on the situation they might call anything from a fastball to a curveball to a changeup. Pitch calling can change the game entirely and “can be used to keep a batter on his toes.”(Hiatt) Without pitch calling it would be way too easy for the batter to get a hit or find a way to get on base.

Another genre that the team uses to get better is the pitch tracking sheets. During the winter, a large part of the off-season is spent indoors while the pitchers throw bull-pins to the catchers. The different pitchers take turn tracking strikes and balls for the other pitcher that is throwing to the catcher. By using this information, the coaches are able to see which pitcher is throwing the most accurate (mostly strikes) or which pitcher is struggling. (mostly balls) Based on where most of their balls are located on the chart, the players can also see what they need to work on compared to everyone else. Most genres used by the baseball team are for the better. I can’t recall the last time I was handed a piece of paper with a negative aspect to it since I’ve been on the team.

For instance, I was given a packet last season labeled “A Batter’s Mentality.” This packet showed us examples of what to do in certain situations when at the plate facing opposing pitchers. The use of genres like this is what helps make the baseball team as successful as we are. ConclusionThere are plenty of things that are similar between the Collierville High baseball team and a discourse community. The combination of teamwork, communication, genres, and a set of common goals is partially what makes the team successful. I hope that I have helped explain that there are many different factors that go into the game of baseball; however, most of these have to do with the team being one huge discourse community. 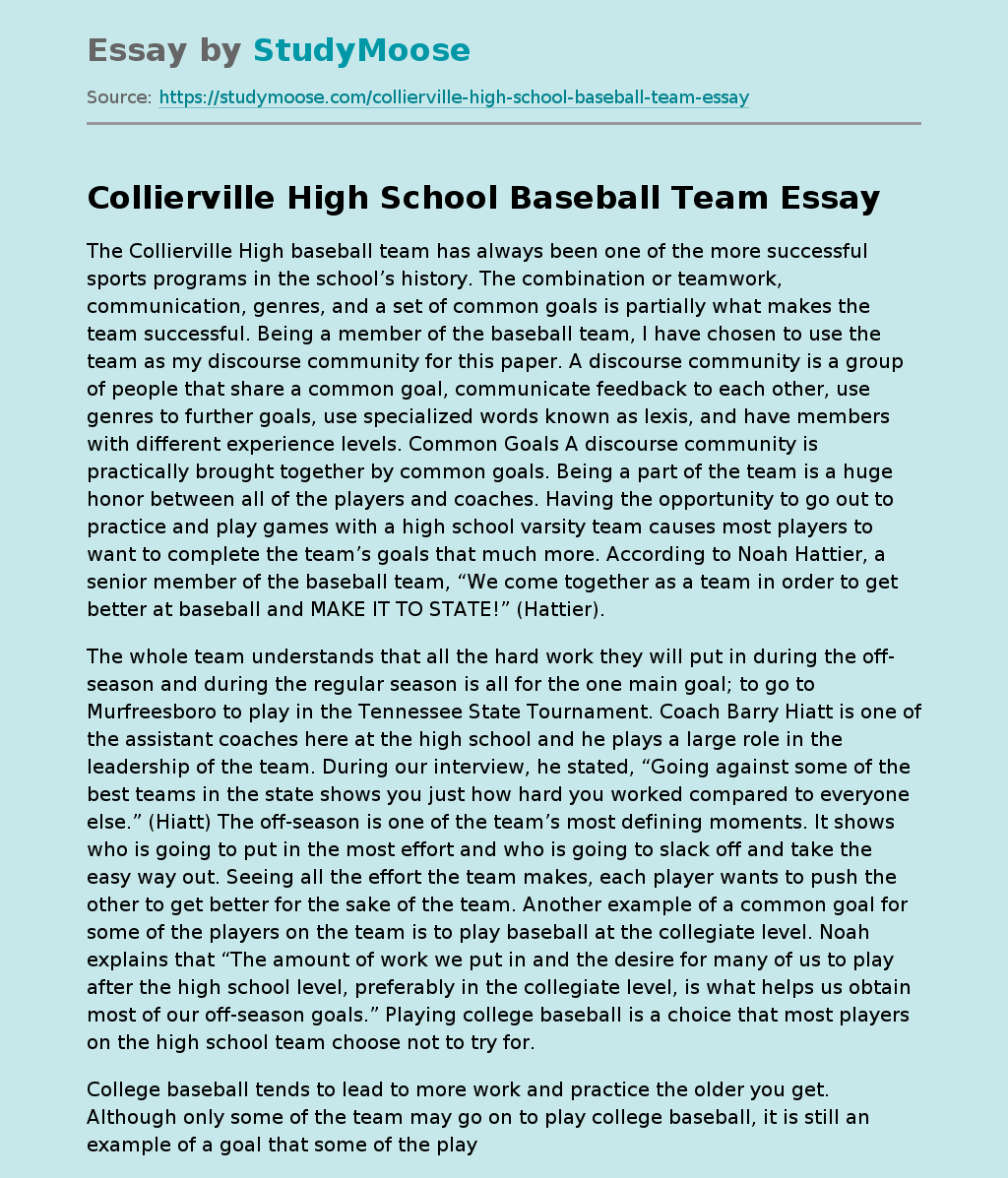