My first trip to a baseball stadium was an experience that will make a long lasting impression on me. Having played on a little league team and having the experiences of playing on a little league field, it is nothing compared to what I saw the first time. It was a night game in the month of May. It was a warm night the bright yellowish-orange sun hit my body; my excitement was growing in anticipation of what was going to be a completely new experience for me, I was going to see my first professional baseball game.

Turn in your highest-quality paper
Get a qualified writer to help you with
“ Baseball Stadium Descriptive ”
Get high-quality paper
NEW! AI matching with writer

As we approached the stadium and parked the car, we walked closer to the entrance of the stadium.

My excitement started to sharply increase. The anticipation of my first live and in color was awaiting me. As we walked toward the ticket booth ahead of my parents to get our tickets, my anticipation was growing. With tickets in hand, I anxiously waited for the gates to open.

I marveled at how beautiful the stadium was built, looking at how the red bricks made specific patterns and other designs. Upon entering the stadium, I saw the gray stairs awaiting me. Nervously approaching them ever so slightly, we waited at the back of the line. I looked around and saw many people socializing amongst each other.

Observing this, we all pondered what they might have been saying about the facility as well. At last, the line started to move. Walking up the stairs, I let my excitement come out.

I was astonished at the magnificent size of the stadium. My family and I proceeded to grab the free program being handed out. Looking around, I witnessed the green seats, the gray facade concession stands, and the black scoreboard with LED lighting. I was overwhelmed taking in the magnitude of the stadium. Proceeding down the concourse, I stopped and grabbed some food.

When entering the stadium, I could smell the popcorn popping, the hotdogs cooking, and the fried dough being fried. Being hungry, I ordered a large buttery popcorn. The popcorn, was white and yellow in color and smothered with butter that lingered on my taste buds. The public address system crackled and the announcer began to utter, “Ladies and gentlemen, will you please rise and remove your hats for the singing of our national anthem. ” Rising to my feet, I began to listen to her sing. Her voice was harmonious and enchanting as she sang. Finally, the moment I waited for, THE GAME HAS BEGUN!

The home team, wearing white jerseys with red hats took the field. They ran, sprinting to their positions as if they are running a 100-yard dash. After about five minutes, the umpire bellowed “Play Ball” the crowd began letting out screams and cheers The game was finally being played. Throughout the game, the feeling of the cool, crisp breeze ran over the stadium as if a ghost had just walked past. The emotions of many of the fans came to light; people were angry and people were happy. As play continued, the emotions were constantly changing with each pitch.

It was the bottom of the seventh; the home team was down by three runs as I began to bite my nails. Nerves began to get the best of the fans. The faces of the players were showing many emotions as well. As the home team took their turn at-bat, a quiet hue came over the stadium with each pitch. Then with the crack of the bat, the team’s worst player hit a three run shot to deep right-center. As the ball traveled, an eerie calm was in the air. Then a loud cheer and a burst of excitement came from all of the fans as he had hit not only his first major league home run, and it was a grand slam.

The crowd was wildly screaming and hollering all sorts of things, it was so exciting. As the game ended two innings later, our team had come back and won. As I and all the other fans filtered out of the stadium, I looked all around once again at the sights, smells and sounds of the game that had disappeared. Nevertheless, were they really gone and did they really disappear, they have disappeared in a physical sense and not from my memory. The fans and the players were going home to get ready for the next game. The day is now over for my family and me, but the experience was one I will never forget on my first trip to a major league stadium. 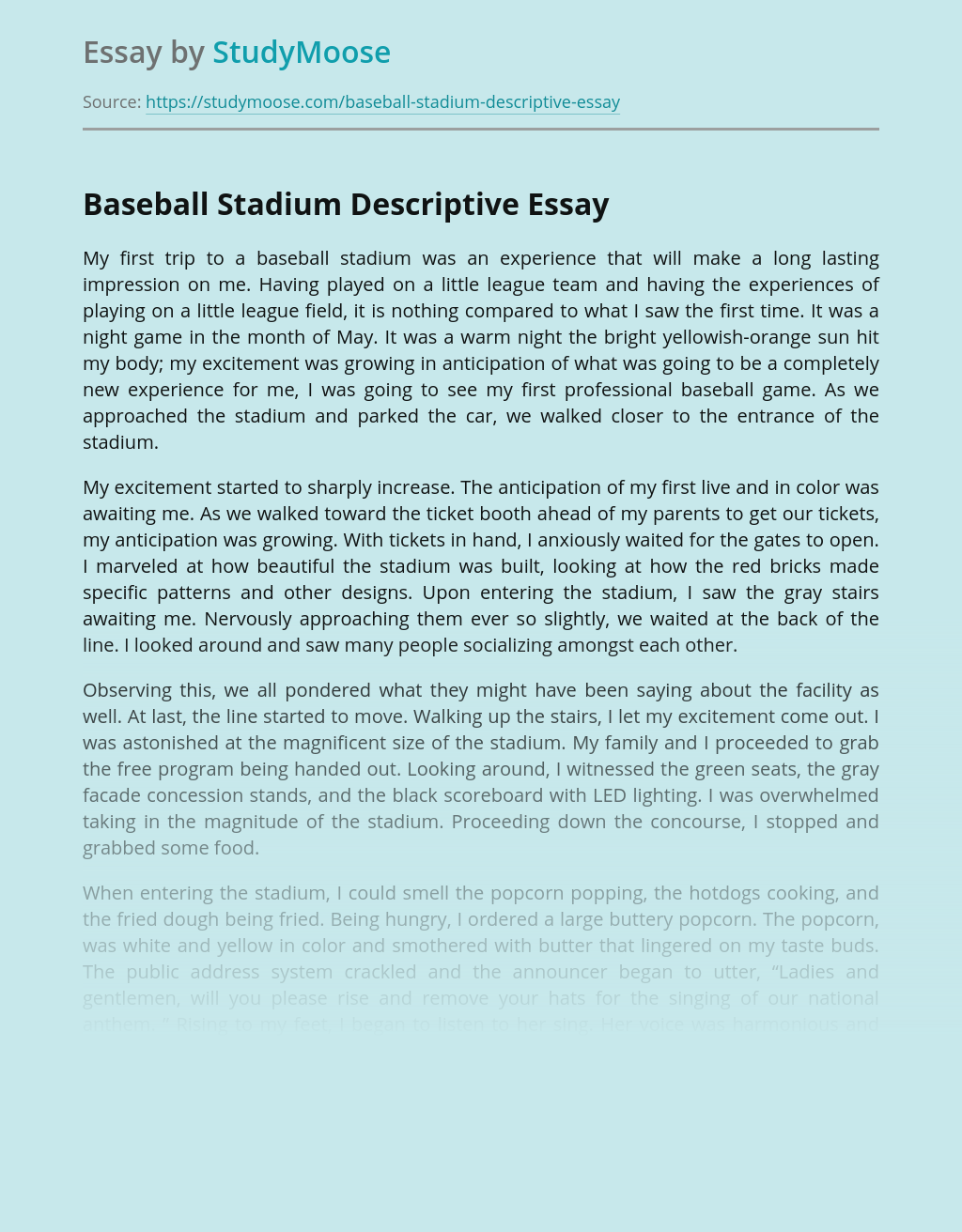 Turn in your highest-quality paper
Get a qualified writer to help you with
“ Baseball Stadium Descriptive ”
Get high-quality paper
Helping students since 2015
Stay Safe, Stay Original