In 1841 Ralph Waldo Emerson wrote his famous essay “Self-Reliance”. This stated his belief in the importance of being self-reliant and outlined the steps necessary to become independent. Over 250 years later Chris McCandless entered the Alaskan wilderness embodying most of the principles that Emerson highlights. Indeed, Chris is almost a perfect example of Emerson’s self-reliant being. Most importantly, he is not afraid to take risks and he follows his soul. The one area where he partially lacks Emersonian principles is in speaking his mind.

Don't use plagiarized sources. Get your custom essay on
“ Chris McCandless and Emerson’s work “Self-Reliance” ”
Get custom paper
NEW! smart matching with writer

As early as high school Chris strived for independence. In the summer after his senior year of high school he packed up his car and headed out alone on an expedition around America. His parents told him to call every day but after a while he stopped calling. Chris also supported the charities of his liking. As a high school student he fought for his causes such as stopping hunger and would often go into the city and work for a soup kitchen.

Moreover, after college he withdrew the rest of the money that he had in his education fund and donated it to OXFAM America, a charity devoted to ending hunger in America, “More than twenty thousand dollars remained at the tie of Chris’s graduation… he would shortly donate all the money… to OXFAM America”(Krakauer 20).

The one way he did not display Emersonian qualities is in his teens and early twenties is that he did not speak his mind on an important issue. After finding out that his father had an affair with another woman, Chris just brooded about it rather than confronting his dad and discussing it.

His hatred for his father grew to the point he finally cannot handle it anymore so he started his post-college journey. While traveling he does speak his mind to most people that he meets along the way.

One of the central philosophies of “Self-Reliance” is not to be afraid to be take risks and to listen to your soul. Throughout his life, Chris McCandless was never scared of challenges. One of the first major risks Chris took was when he tried to reach the Gulf of Mexico on a canoe down the Colorado River. After getting lost and ending up on the Baja Peninsula, Chris got a ride from a few Mexicans to the ocean. He then spent a month without coming in contact with another human, “He had not seen or talked to another soul in 36 days. For that entire period he subsisted on five pounds of rice and what marine life he could pull from the sea…” (Krakuer, 36). Chris stopped his journey midway through and walked back to the United States because he realized that he was in danger of dying if he continued.

The whole adventure was perilous but he did it because he was following his soul. The biggest risk Chris took was hiking into the Alaskan wilderness alone, in order to live there for few months. Despite the inherent danger that comes along with being by oneself in a remote setting Chris still followed his soul and did what he wanted. In the process he demonstrated a couple of Emerson’s other philosophies: not to depend on technology and keep only what you earn. He went into the wilderness with a backpack filled only with supplies that he had earned through his own hard work, “His gear seemed exceedingly minimal for the harsh conditions of [Alaska]… He had no ax, no bug dope, no snowshoes, no compass” (Krakauer, 5). Similarly, after college Chris did not accept an offer of a new car from his dad because he felt that did not earn it.

Indeed, Chris McCandless was truly self-reliant. If Emerson were alive today he would recognize Chris as a model of self-reliance. Tragically, Chris had some bad luck and ended up dying. Still, there is much to admire about the way he lived. 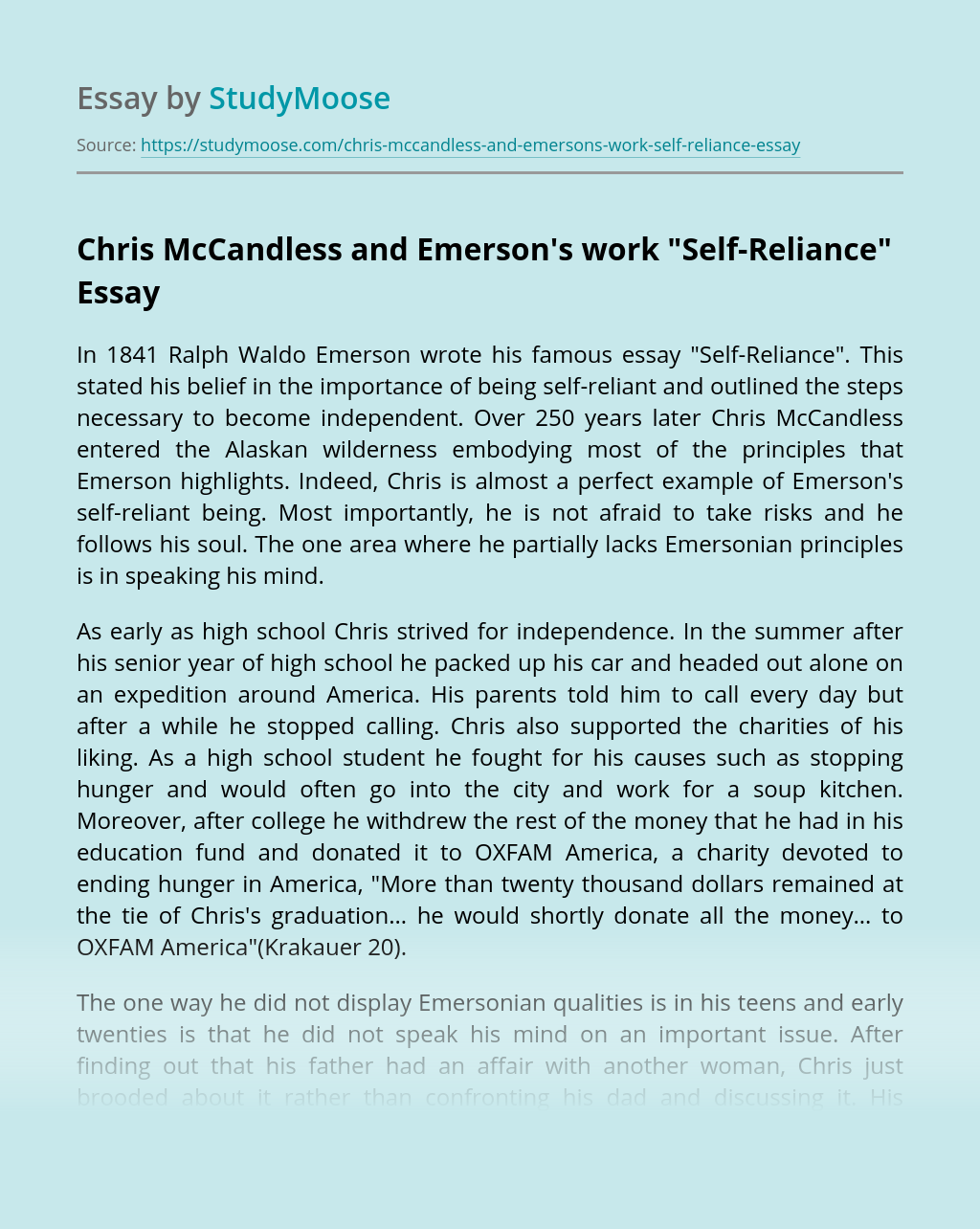