Chris Brown (b. May 5, 1989) is an American recording artist. He made his recording debut in late 2005 with the self-titled album Chris Brown at the age of 16. The album featured the hit single “Run It!”, which topped the Billboard Hot 100, making Brown the first male artist to have his debut single top the chart since Montell Jordan in 1995.

Singer, songwriter, actor. Born on May 5, 1989, in Tappahannock, Virginia. Chris Brown is already on his way to music superstardom with his smooth voice, amazing dance moves, and boy-next-door charm.

Growing up in a small town of roughly 2,000 people, he was a born entertainer. Brown enjoyed singing in his church choir and was inspired by such musical artists as Sam Cooke, Stevie Wonder, and Michael Jackson. He also showed off his dance prowess by imitating the dance moves of another one of his idols, Usher.

Brown was discovered by Tina Davis, who was working for Def Jam Recordings at the time.

“The first thing that hit me was his unique voice,” Davis told Billboard magazine. “I thought ‘This kid is a star.'” Davis eventually became his manager and helped him land a deal with Jive Records, which had developed other young acts such as Britney Spears and ‘N Sync and is home to other hip-hop and R & B stars such as R. Kelly, Usher, and Kanye West. At the time of deal, Brown was only 15 years old.

Brown’s self-titled album was released in November 2005 and quickly found its way into the charts.

Working with established producers and songwriters, he had a number one hit with “Run It!,” which was co-written by Scott Storch and Sean Garrett. The track also featured a guest appearance by rapper Juelz Santana. More hits followed, including “Yo (Excuse Me Miss)” and “Gimme That,” which was written by Garrett and Storch. While many of the songs have a hip-hop influence, Brown’s voice has a classic R&B sound. And just like many other teenagers, dating and girls figure prominently in his songs. He has sometimes been compared to Michael Jackson because of his dual talents as a singer and dancer.

The album brought Brown two Grammy Award nominations for Best New Artist and Best R&B Contemporary Album. While he did not win, he showed the audience at the Grammy Awards just how talented he was by holding his own while performing with two R&B legends, Lionel Richie and Smokey Robinson. Brown went on to receive a number of other awards, including an NAACP Image Award for Outstanding New Artist. With a large following of young fans, it was no surprise when he won a Teen Choice Award for Choice Music Breakout Artist Male.

In 2006, Brown went out on the road for his Up Close & Personal tour. He played more than 30 concerts in cities across the country. While he enjoyed playing live, it was not without its hazards. “Once during a show, I reached out to touch these girls’ hands, and they pulled me off the stage,” Brown told CosmoGirl magazine.

Expanding his career as an entertainer, Brown has branched out into acting. He had a small role in the box office hit Stomp in the Yard (2007), which centered around a step dance competition. The film also featured another popular R&B performer, Ne-Yo. On the small screen, Brown played against type as a high school band geek on The O.C. for several episodes.

The final months of 2007 brought a wave of new projects for Brown. He released his second album,

Exclusive, in November. On this latest project, Brown became more hands on behind the scenes. He helped write several tracks, including the hit single “Kiss Kiss” with T-Pain. In addition to T-Pain, Brown worked with Sean Garrett on “Wall to Wall” and will.i.am and Tank on “Picture Perfect” among others. He also came up the concepts for his music videos and served as co-director on them.

Around the same time, Brown returned to the big screen with a more substantial role in the holiday-themed dramatic comedy, This Christmas (2007). As Michael “Baby” Whitfield, he played a young man wanting to pursue a musical career despite opposition from his family. The film also featured Delroy Lindo, Loretta Devine, Regina King, and Mekhi Phifer. Next up for the budding actor is reportedly the lead role in the sports drama Phenom.

In February 2009, the young performer made headlines after being arrested for allegedly assaulting then-girlfriend, singer Rihanna during an argument. “Words cannot begin to express how sorry and saddened I am over what transpired,” Brown said in a statement shortly after the incident. He was charged with two felony counts related to the incident.

In June, Brown pled guilty to the charges and was sentenced to 180 days of community labor and five years of probation. He was also ordered to stay away from Rihanna. The following month, Brown fully acknowledged and apologized for his actions, saying in a video statement that “I have told Rihanna countless times, and I am telling you today, that I am truly sorry and that I wasn’t able to handle the situation both differently and better.” At this point, it is unclear what impact his legal woes will have on his career. 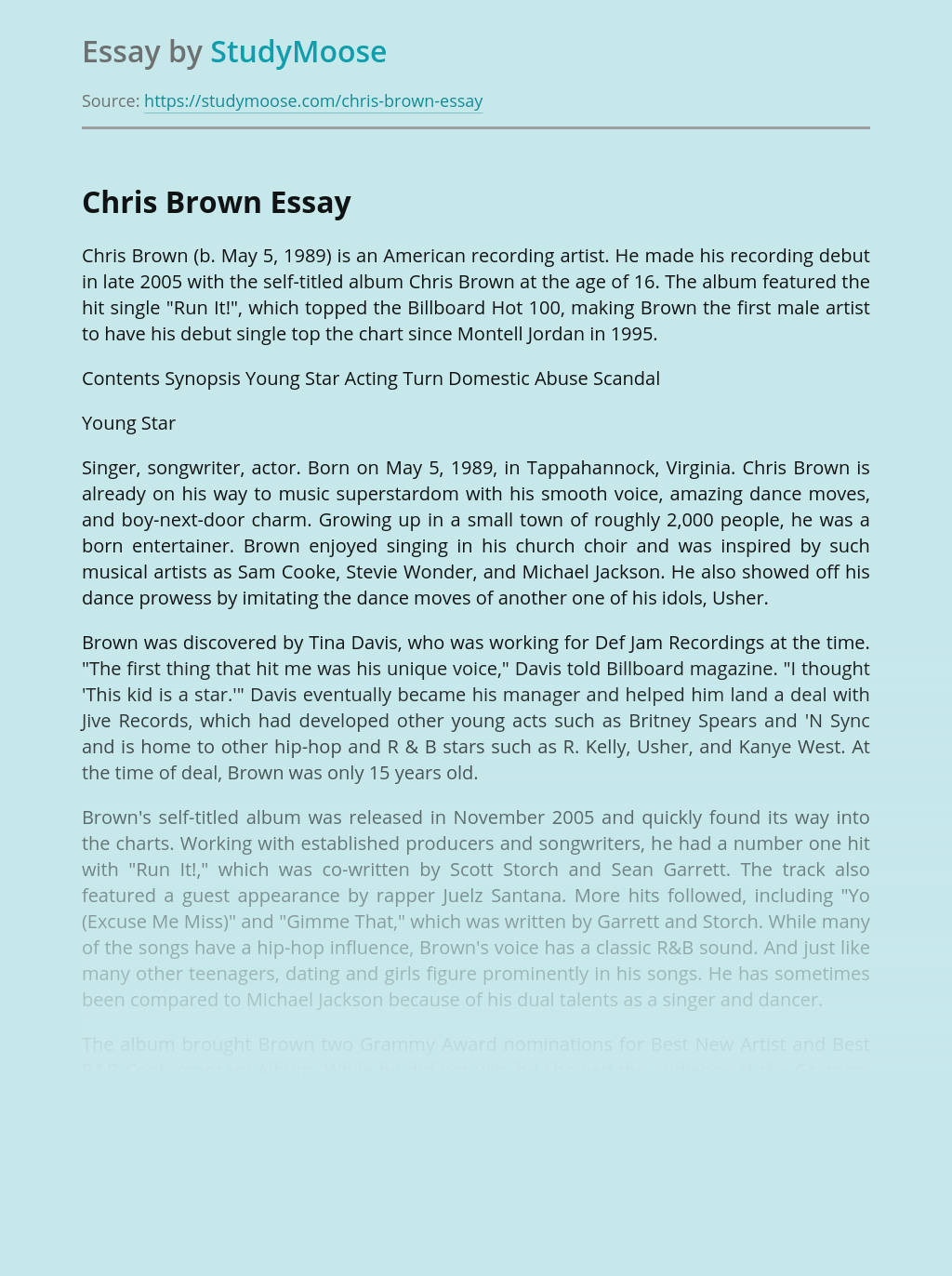