Brief facts of the case

A former bank relationship manager, Liaw Tick Kwan, was sentenced to jail in 2019 for 3.8 years after cheating more than $200,000 from two elderly clients.

He made unauthorized transfers and lied about profitable investments to Mr Chin and Mdm Chou.

Liaw committed these infractions between 2013 and 2015 during his time as a relationship manager at DBS and when he held a corresponding role at Standard Chartered bank.

Don't use plagiarized sources. Get your custom essay on
“ Cheating by Liaw Tick Kwan ”
Get custom paper
NEW! smart matching with writer

Mr Chin granted his personal details to Liaw as he was told that they were required to manage the investment transactions. Liaw transferred a total of about $67,000 to Mdm Chou and S$63,500 to Mean Chey International Investment to prove that they have earned profits from the investment of foreign currencies and to purchase real estate in Cambodia for his personal use. After leaving DBS, Liaw got both the elderly to switch to Standard Chartered so he could continue being their bank manager.

Liaw requested for more funds from Mdm Chou saying that she could yield greater profit.

In 2015, Liaw tricked Mr Chin into signing a cheque of $24,480 claiming that they were fees payment, but it was for Liaw’s personal use. Mr Chin then grew suspicious. After checking with the bank, he realised that he had been cheated. A police report was then made.

Liaw compensated both Standard Chartered and Mr Chin. The court held for each count of offence. Liaw could be fined and face imprisonment of up to 10 years.

Misrepresentation, one of the vitiating factors, are false statements made by one party to another, inducing the other party to enter into a contract and thereby suffering losses, making the contract voidable.

There was a contract between Liaw, Mr Chin and Mdm Chou. In the article, Liaw made a false statement recklessly out of greed and deceived Mdm Chou, saying that she had earned investment returns in relation to one of his client’s investments that had been deposited into her bank account. He asked her to withdraw more funds for greater profit. Mdm Chou handed $67,000 to Liaw. Next, Liaw tricked Mr Chin into signing a cheque of $24,480, claiming that it would be used for fees payment. Liaw then used it for his personal expenses.

Applying the elements set out by the Court of Appeal, fraudulent misrepresentation was present. Firstly, Liaw made the representation of fact by words by saying that the investments would bring greater profit. Secondly, the representation was made with the intention to induce Mr Chin and Mdm Chou to give him money. Thirdly, the victims acted upon his false statements and entered into a contract with him by giving him the money he requested. Fourthly, both victims suffered losses of up to $147,200 and Liaw gained up to $200,000 for himself. Lastly, the representation was made with knowledge that it was false, and it contained an element of dishonesty as the money Liaw received was used for his personal expenses.

The facts of this case are similar to the facts of Panatron Pte Ltd v Lee Cheow Lee & Another. Liaw made a fraudulent misrepresentation of material facts to Mr Chin and Mdm Chou, causing them to incur losses. Since all elements of fraudulent misrepresentation are present, victims can rescind the contract and claim for damages under tort of deceit.

Therefore, Liaw is liable for fraudulent misrepresentation as he had made false statements knowingly due to his greediness, which made victims suffer losses. The remedies for the victims are that they can choose to rescind the contract and claim for damages under tort of deceit.

The claim for damages can be seen as stated in the article where “Liaw compensated both Standard Chartered and Mr Chin.”

Some takeaways are that we should be honest at all times and not deceive others for personal gains by making false statements. It is unethical for one to make use of other people’s trust to gain financially such that we should have the morality to do the right thing. One should take responsibility for his own actions if he does anything wrong. 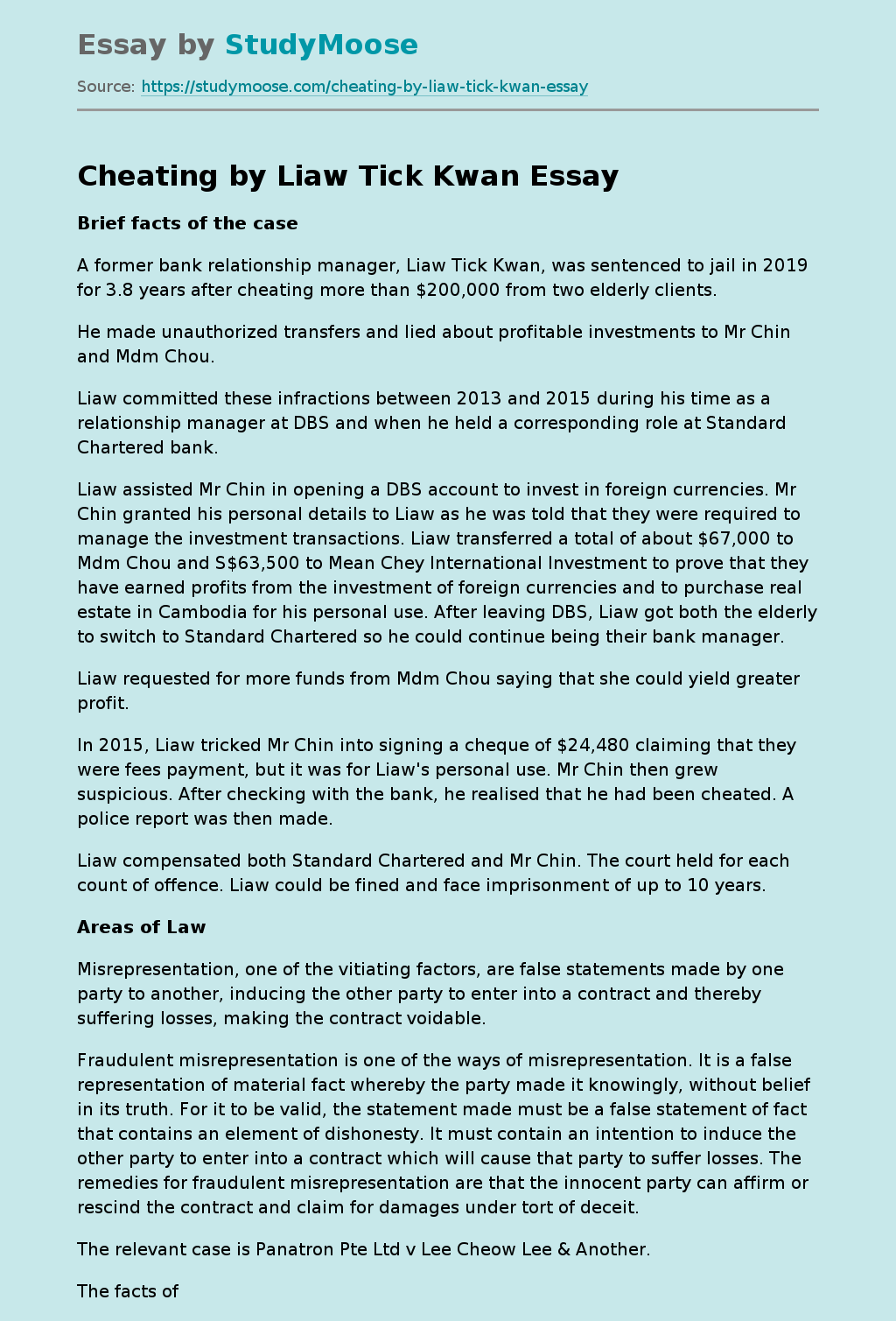