Cheating occurs everywhere. Somebody right now in a classroom, baseball park, football field, basketball court, or a workplace is secretly cheating to be one step ahead of his competition at all times. Some say it is the nature of competition that arises these cheaters, but others believe it is the enormous amount of pressure that is put on these athletes. Although many current athletes secretly follow the cheating paths of Barry Bonds and Lance Armstrong to excel in their respective sports, they fail to realize the culture of cheating changes the way people look at the sport.

Don't use plagiarized sources. Get your custom essay on
“ Cheating in Sports ”
Get custom paper
NEW! smart matching with writer

Performance enhancing drugs are used by professional athletes to improve their efficiency. Performance enhancing drugs, or steroids, increases testosterone in the body and helps athletes recover from injuries quicker and most importantly it promotes muscle growth. Steroids quickly transforms these athletes to superstars who continually break records with relative ease. With the expectations of fans nowadays on these athletes, winning has become more important than being loyal to the game.

Remember, this is their career that these athletes are putting in jeopardy but many forget that and look at the high risk high reward, with the high reward being the millions of dollars they will receive for being the top performer. The use of these steroids have become a major concern for the United States Anti Doping Agency because these athletes and trainers are always finding different ways to get passed the testing system.

What convinces these athletes that cheating is fair? Is it the trainers who amaze these athletes by showing the freakish results they can achieve by using steroids? Are they intrigued by the millions of dollars a Most Valuable Player award surely will translate.

Is it the will and determination to win every game? Some will cheat just to stop their rivals from achieving greatness.

Arguably one of the greatest baseball players of all time Barry Bonds is one of the biggest cheaters in sports history. A major league baseball player for twenty one years for the Pittsburgh Pirates and mainly the San Francisco Giants, Bonds holds numerous records including Most home runs of all time, single season home run record, seven Most Valuable Player awards, four consecutive, and many more.

Bonds started his career with the Pittsburgh Pirates where he was a slim speedy outfielder with moderate power. He single handedly led the Pirates to several deep playoff runs but he just could not get his team over the hump of winning the championship. In 1993 Bonds left the Pirates to join the Giants on at that time the highest paid contract in baseball. In San Francisco, he became one of the best sluggers in history. Each year fans expected him to be in the final voting for the Most Valuable Player award and Bonds did exactly that. Throughout his years it became noticeable how his body physique was drastically changing. Barry Bonds transformed from a moderate powerful batter combined with speed to steal bases into a bodybuilder body that took pleasure in abusing opposing star pitchers.

Since 2003, Barry Bonds’ name has been a key figure in the BALCO scandal. Just like any athlete he denied that the use of performance enhancing drugs were the reason why he had such a career. In 2007, he was indicted because he allegedly lied under oath in court about his involvement with steroids. During this scandal there were many allegations that proved Bonds had failed drug tests back in 2001 and 2000 after having his most productive seasons. These paperwork showed that even his trainer at the time, Greg Anderson, was indicted by the grand jury for distributing anabolic steroids to many of his baseball clients. Even with all of this information, Barry Bonds denied and said the change of his body was not because of steroids but a strict diet and workout program. He was convicted on April 13, 2011 on the obstruction of justice charge for trying to avoid a question when asked under oath. Although his sentence did not include prison time, he lost every ounce of respect from his beloved fans and his complete career now has an asterisk next to it.

With the evolution of steroids in baseball it may be inevitable before every athlete is cheating. You may think if everyone used steroids the game would be more entertaining with more home runs and action packed games, but fail consider the health risks these drugs have. The use of these drugs are not accidental they are used to gain an advantage over the opponent. If every athlete was using drugs it would be natural for them to knowingly increase the dosage and potentially damage their bodies fatally.

Easily the most dangerous cheater of all time goes to the cyclist by the name of Lance Armstrong. Mr. Armstrong is a cancer survivor and 7 time Tour de France winner. At age 25 he was diagnosed with cancer and had immediate surgery and chemotherapy to save his life. Doctors said that Lance Armstrong had less than a 40% chance of survival during this stage in his life. Despite all of this he remained focused on his secret doping to make a return to the sport of cycling and he did just that. Lance came back to win 5 more Tour De France titles and went down as the best cyclist of all time.

For much of his career many doubted that Lance Armstrong could achieve all of this without the use of some type of performance enhancing drugs. Just like Barry Bonds, Lance Armstrong worked with a controversial trainer who was linked to distributing steroids. Armstrong continued to deny every single true allegation that was thrown at him by using the excuse that he had passed over 600 drug tests throughout his career. Then came the USADA investigation in 2011-2012 that accused him of not only using steroids but trafficking drugs based testimonies that were submitted by former teammates and friends. He was accused of putting pressure on his teammates to take steroids to make sure the team would win the Tour de France.

Lance Armstrong turned out to be the biggest bully in sports history because he would sue every person that allegedly said he took performance enhancing drugs. He lied continuingly in court and took the money of these people who were speaking the truth. These people were his teammates and friends that were there for him when he had cancer.

In January 2013 Lance Armstrong finally came clean and admitted to Oprah Winfrey in a television interview that he was guilty of using all the drugs he was accused of taking. The scariest part of the interview was when he said at the time he felt like there was nothing wrong with what he was doing because everybody else cheated also so it felt like fair game. After all these cruel years of lying, cheating, and tainted titles, Lance Armstrong has rightfully been banned from participating in sports.

In conclusion, there is nobody out there that can stop these grown male and female athletes worldwide to stop cheating and play the game how its supposed to be played. There is no doubt, however, that all this increased cheating has tainted every sports’ reputation and all time records mean nothing now. The only solution that could combat the cheaters is to give out lifelong bans for positive cheating tests. Nowadays the only penalty these players receive is a lengthy suspension, but by the time these athletes have been caught the outcome of the games and records have been broken. 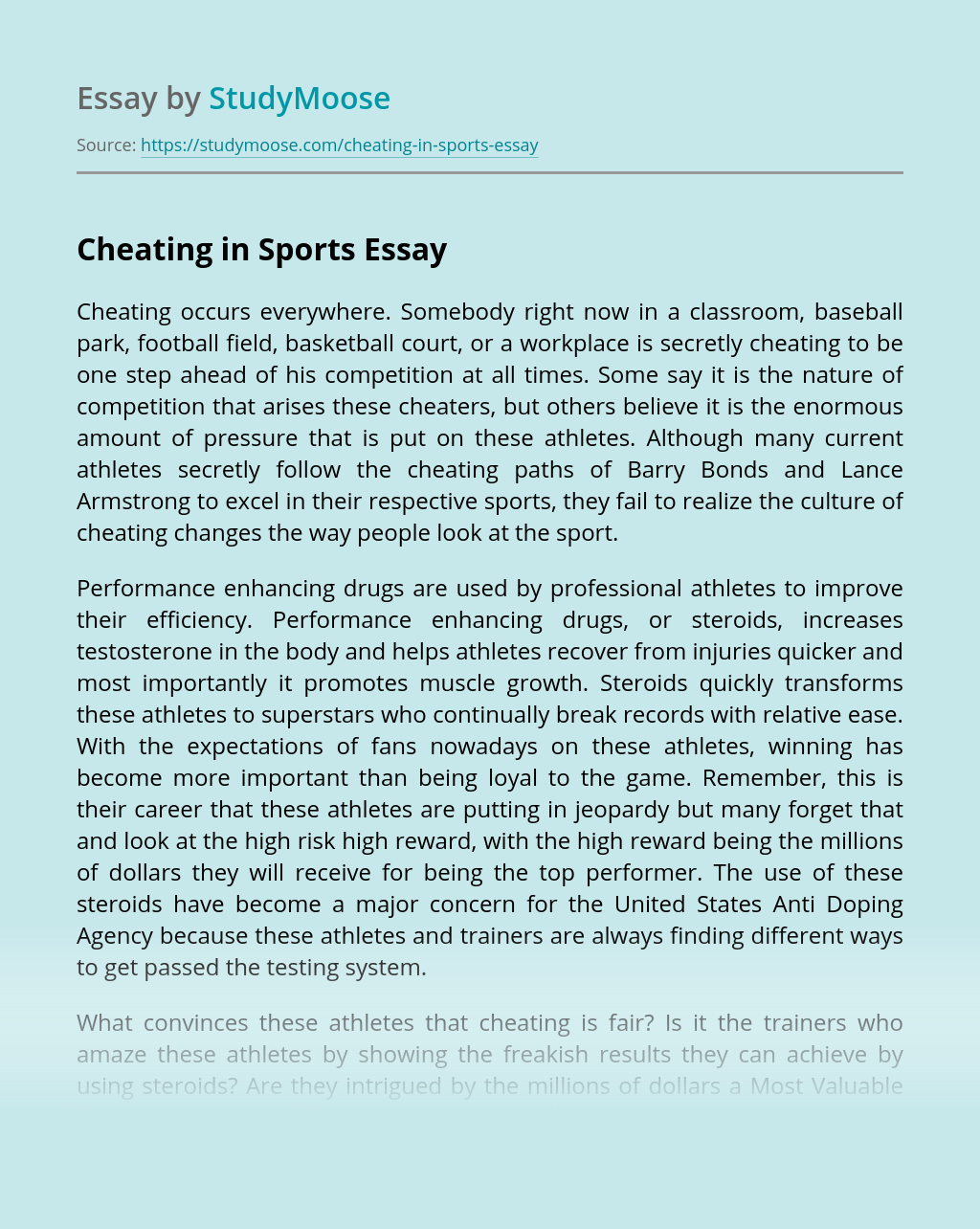