Any type of organization runs successfully when it is piloted by a skillful and influential leader. While leaders motivate their followers, it is not the only thing leaders can do. A good leader can structure the organization in the way he wants.

What is charismatic leadership?

Weber defines charismatic leadership as “resting on devotion to the exceptional sanctity, heroism or exemplary character of an individual person, and of the normative patterns or order revealed or ordained by him” [3]. He envisaged religious leaders like Jesus as charismatic leaders. Later researches considered various social-political leaders like Mahatma Gandhi as charismatic leaders. Dictators like Hitler also had some charismatic traits. These were the leaders with exceptional qualities which made them almost god-like for their followers. The charm of such people made their followers go behind these leaders without questioning them. While analyzing such a strong bond between the leaders and his followers Weber focuses on the social patterns and conditions under which the leader exists.

This step takes place from the composite mixture of the three factors mentioned above. It is a stage where the aspiring leader is on the social horizon; the followers are in distress and are looking forward to someone who will identify himself with their problems. The social situation is increasingly getting worsened in this stage. This is the time when the leader establishes him as a potential leader but the followers, by large, remain passive. In Gandhi’s leadership this can be said to have taken place during the years 1915-1920 when Gandhi was back to India from a successful movement in South Africa. India had no tall leader whom it could depend on and Gandhi’s charisma was just started showing its colors (Champaran and Kheda Satyagraha) [5].

In this step the leader arouses the follower to become the part of the change. Followers who were passive admirers of the leader till the earlier phase become active supporters of the leader and the cause for which he is identifying himself. The longer this stage lasts the longer is a span of the charismatic leadership. In Gandhi’s case this step lasted from 1920 till 1930. Gandhi’s non-cooperation movement in 1921 is a precise example of activity arousal stage where he awakened the whole country to rise against the British rule [6].

Commitment stage in the charismatic leadership is without any doubt the most interesting step in the process. This step takes the charismatic leadership at the peak and at the same time this is the phase when the charismatic leader starts losing his charisma. This step starts by demonstrating the extreme commitment of the leader towards the goal and same commitment from the followers towards the leader. This demonstration often takes the shape of some kind of sacrifice on the part of the leader or impending danger on the leader. This sacrifice or danger makes the image of the leader as courageous and dedicated in the eyes of many followers. Interestingly, this same act makes some of the elite followers disillusioned and they start suspecting their leader as pompous and hypocrite. This is the stage where the leadership can be bifurcated into two categories as a personalized leadership and socialized leadership. The first type of leadership tends to become authoritarian and exploitative.

The second type of leader is more egalitarian and he will share power and responsibility with others. In either way, the personalized leader will become dictator and will lose his charisma and the socialized type of leader will help routinizing the leadership! The example for personalized leader can be of Hitler who ultimately became a dictator. Gandhi can be seen as a fusion of both types with definitive inclination towards socialized type of leadership. For Gandhi the commitment stage can be said to have lasted from 1930 to 1935. Salt Satyagraha can be considered as the peak of his charisma and the diplomatic failure at the Round Table Conference can be seen as the first symbol of the next step of the disenchantment [7].

This phase is quite unavoidable and sometimes even intentional on the part of the leader. Many times social structure brings the disenchantment stage. Sometimes, because the leaders themselves know that they are not immortal, they try to bring the routinization in the leadership. This routinization brings the feel of loss of goal to some followers. This step may lose some of the strongest followers from the leader. This step is also an outcome of the scenario when the leader seems to be failing. As the charismatic leaders are not very good at the formal procedural leadership [4] more routinization brings more failure and more disenchantment of the followers. In Gandhi’s case disenchantment started from 1933 and lasted till 1938 in which stage he lost many of his old followers like Subhas Chandra Bose [8]. However this is the phase where the process of routinization seemed to have taken place distinctly.

This step is a logical follower of the earlier step of disenchantment. Disenchantment starts because of routinization and it leads to the depersonalization and formalization of the leadership. The leadership style becomes more and more like bureaucratic leadership. The leader starts delegating his tasks to his followers. This phase comes in Gandhi’s leadership during 1938-1942. This is the period when he made it clear that Jawaharlal Nehru will be his political heir. It is the time when he withdrew himself partly from the active politics [9].

This is a process of disintegration of the three factors mentioned in the beginning which had come together in phase one. In this step, due to the formalization and bureaucratization of the leadership, charismatic leadership becomes increasingly redundant. The followers feel that the organization and the leader are going away from the initial goal and thus they start alienating themselves from the organization and the charisma of the leader fades as the social situation which has made him appeal to the masses has changed. This stage does not necessarily mean the failure of the leader. In many cases, having achieved the goal for which the charismatic leader had risen, the leader becomes redundant for his followers and the goal itself becomes redundant for the leader. Years 1942-1948 show this phase in Gandhi’s leadership. Though Gandhi remained popular and worshiped leader of India till his assassination, his charisma faded gradually in his last years [10].

Parental Attachment Style and Parental Psychological Control [11] It has been observed that a way a child is attached to his parents in his adolescence plays important role shaping him as an effective charismatic leader. It is seen that young adult securely attached to his parents tends to form a positive relationship with his followers in the later life.

Self motivation is an important part of charismatic leadership. The leader gets motivated by the social scenario without being prompted about it. He can address his followers with the vigor only when he is self-actualized himself. It has been observed that such leaders not only motivate themselves but they have a capacity to transform this self-actualization to their followers as well. They actually raise their followers from one level to the higher level.

Charismatic leaders often do not seek conventional power. They may not ask for an official post or position but what they look for is a social power. They want their follower to respect them and see them as their saviors. They want to win the position in their follower’s hearts. They look for identifying themselves with their follower’s values and shared beliefs. Such leaders are rated high on their social skills to persuade the masses and appeal them to their hearts. It is this power which keeps them popular for longer time.

Charismatic leaders are known for their self-correcting nature. They judge themselves on a strict scale. They continuously strive to become better. They, in fact, know that it is this “superiority” in them which makes them different from their followers. Charismatic leaders believe that when eventually they will bring their followers to their present level of “superiority”, they themselves should have gone one step above it to remain their leaders.

Charismatic leadership also has severe negative effects in some cases. The shared vision and ideas between the leader and followers create enormous energy in the organization. The leader can employ this energy in destructive way. The more the leader’s self-confident is the more are the chances that the leader will misuse the power. It’s been observed in many cases that charismatic leaders have abused their powers. Many companies have witnessed their high rank leaders going corrupt [13]. Because of excellent communication abilities of the charismatic leaders and due to the fact that they display some kind of charisma, the whole organization follows these leaders wholeheartedly and there remain absolutely no resistance for the leader.

Without any check on the power, it doesn’t take time for the leader to go corrupt. Any healthy organization shows competition for power which also represents tussle between values and with lack of this tussle there remains no control on the leader. Followers of the charismatic leaders are so blinded by his charisma that they might even do some acts that they wouldn’t have done ordinarily. Atrocious acts by German soldiers under Hitler’s leadership are an apt example [13]. It was an unquestionable loyalty for their leader that compelled them to act in the way that they mostly wouldn’t have acted otherwise. 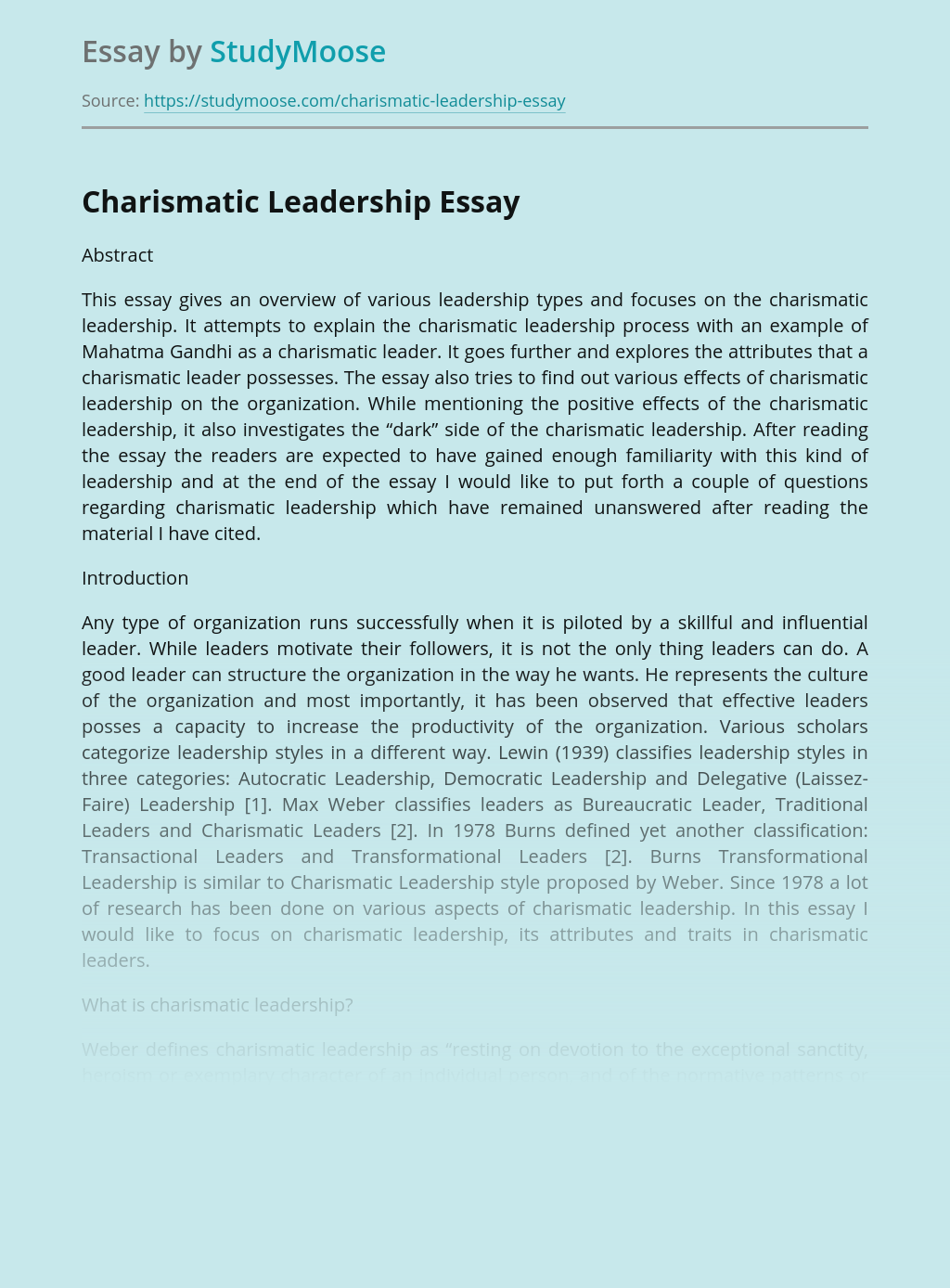