This paper will describe Servant Leadership and focus on the differences between transformational leadership and servant leadership. It will look at the characteristics of servant leadership within modern day competitive industries and the practicality of the theory through application. We will further review how the Bible relates to this theory and criticisms of the theory. The concept of Servant Leadership was developed in the 1970’s reflecting the idea that great leaders primary goals are to serve others. This term would suggest that a good leader must aspire to lead through a need of servicing others versus trained to lead through external motivations.

It further suggests that a person must have a specific set of values in order to be a successful leader. This is different from transformational leadership that suggests that leaders are developed or trained. A transformational leader is empowered through motivation, persuasion and vision. As we continue within this topic we will look as similarities and differences of the two styles and their success in influencing organizational change within competitive markets.

What is Servant Leadership and how does it differ from transformational leadership? “The phrase “Servant Leadership” was coined by Robert K. Greenleaf in The Servant as Leader, an essay that he first published in 1970. In that essay, he said:”The servant-leader is servant first… It begins with the natural feeling that one wants to serve, to serve first. Then conscious choice brings one to aspire to lead. That person is sharply different from one who is leader first, perhaps because of the need to assuage an unusual power drive or to acquire material possessions…The leader-first and the servant-first are two extreme types.

Between them there are shadings and blends that are part of the infinite variety of human nature.”” www.greenleaf.org/whatissl/.

Servant leaders focus on ones potential and growth; they seek to develop leaders. They believe in reaching individuals at an emotional level; they will pass over advancement of themselves to assist their team. On the other hand transformational leaders focus on organizational development. They believe leaders are produced through innovation and creativity. Transformational leaders are risk takers and place more emphasis on intellectual stimulation versus Servant leaders are attracted to one’s potential, character, values and assisting them in developing those traits. What are the characteristics of Servant Leaders and how are they developed?

1. “Listening. Leaders have traditionally been valued for their communication and decision-making skills. While these are also important skills for the servant-leader, they need to be reinforced by a deep commitment to listening intently to others. The servant-leader seeks to identify the will of a group and helps clarify that will. He or she seeks to listen receptively to what is being said. Listening, coupled with regular periods of reflection, is essential to the growth of the servant-leader. 2. Empathy. The servant-leader strives to understand and empathize with others. People need to be accepted and recognized for their special and unique spirits. One assumes the good intentions of coworkers and does not reject them as people, even if one finds it necessary to refuse to accept their behavior or performance.

3. Healing. One of the great strengths of servant-leadership is the potential for healing one’s self and others. Many people have broken spirits and have suffered from a variety of emotional hurts. Although this is part of being human, servant-leaders recognize that they also have an opportunity to “help make whole” those with whom they come in contact. In “The Servant as Leader” Greenleaf writes: “There is something subtle communicated to one who is being served and led if implicit in the compact between servant-leader and led is the understanding that the search for wholeness is something they share.” 4. Awareness. General awareness, and especially self-awareness, strengthens the servant-leader. Awareness also aids one in understanding issues involving ethics and values. It lends itself to being able to view most situations from a more integrated, holistic position. As Greenleaf observed: “Awareness is not a giver of solace–it is just the opposite. It is a disturber and an awakener. Able leaders are usually sharply awake and reasonably disturbed. They are not seekers after solace. They have their own inner serenity.”

6. Persuasion. Another characteristic of servant-leaders is a primary reliance on persuasion rather than positional authority in making decisions within an organization. The servant-leader seeks to convince others rather than coerce compliance. This particular element offers one of the clearest distinctions between the traditional authoritarian model and that of servant-leadership. The servant-leader is effective at building consensus within groups. 7. Conceptualization. Servant-leaders seek to nurture their abilities to “dream great dreams.” The ability to look at a problem (or an organization) from a conceptualizing perspective means that one must think beyond day-to-day realities.

For many managers this is a characteristic that requires discipline and practice. Servant-leaders are called to seek a delicate balance between conceptual thinking and a day-to-day focused approach. 8. Foresight. Foresight is a characteristic that enables the servant-leader to understand the lessons from the past, the realities of the present, and the likely consequence of a decision for the future. It is also deeply rooted within the intuitive mind. Foresight remains a largely unexplored area in leadership studies, but one most deserving of careful attention. 9. Stewardship. Peter Block has defined stewardship as “holding something in trust for another.” Robert Greenleaf ‘s view of all institutions was one in which CEOs, staffs and trustees all played significant roles in holding their institutions in trust for the greater good of society. Servant-leadership, like stewardship, assumes first and foremost a commitment to serving the needs of others.

This awareness causes the servant-leader to seek to identify some means for building community among those who work within a given institution. Servant-leadership suggests that true community can be created among those who work in businesses and other institutions. Greenleaf said: “All that is needed to rebuild community as a viable life form for large numbers of people is for enough servant-leaders to show the way, not by mass movements, but by each servant-leader demonstrating his own unlimited liability for a quite specific community-related group” Spears, Larry C. “Practicing Servant-Leadership” Leader to Leader. 34 (Fall 2004)7-11

In Maxwell, Chronicles 21:8 states, Consider what our Lord teaches us about servant leadership:
God’s Economy:
* Pursuit of love and service to others
* Improve the welfare of the people
* See others as brothers who complement
* Motive is to meet needs and grow the cause
* The result: God glorified
Human Economy:
* Pursuit of power and prestige
* Improve wealth and status
* See others as enemies and competitors
* Motive is to remove or kill opposition
* The result: the leader is glorified

Adjusting the “Human Economy to become God’s Economy is a large project to take on, and for some companies an impossible task to model the Servant Theory in a competitive market almost seems to be contradictory. Maxwell refers to scripture in Athaliah by stating, “Some leaders step into positions of power out of love and a sense of mission. Others, seek leadership merely to gain power over others and to revel in a smug feeling of superiority” (557). For a very long time when thinking of a competitive market we expected and searched for leaders with the Human Economy; those that marveled in power for we believed they would take us to success. Time has proven different at God’s values reins. Is there a place for Servant Leadership in a competitive work industry?

Can we say Southwest Airlines? How about Amazon? Is there a place in a competitive market for Servant Leadership? Of course there is. Who wants to do business with a company that cares about their employees and runs their business modeling ethics, social responsibility, consideration and humility for others? We all want to talk to someone that listens and truly understands our needs and works hard to meet them. It seems that the market dictates that Servant Leadership can be combined at levels with other types of leadership with the overall morals prevailing. In The roles of values in servant leadership, “Leaders need to develop a value system that serves.

What are some of the criticism of Servant Leadership?

I have seen several articles that refer to “Servant Leadership” as the soft approach. Basically each would assert that “Servant Leadership” traits are not suited for the competitive market. Degraff and Tilley, go so far as to state “ The servant leader focused on “serving” and “inspiring” follows leads to a situation where accountability or responsibility gets diluted. More than criticism I have seen assertions stating that this type of leadership is not measureable or has not been measured and that more information is needed. Critics don’t quite get how a company can be Godly and a winner. 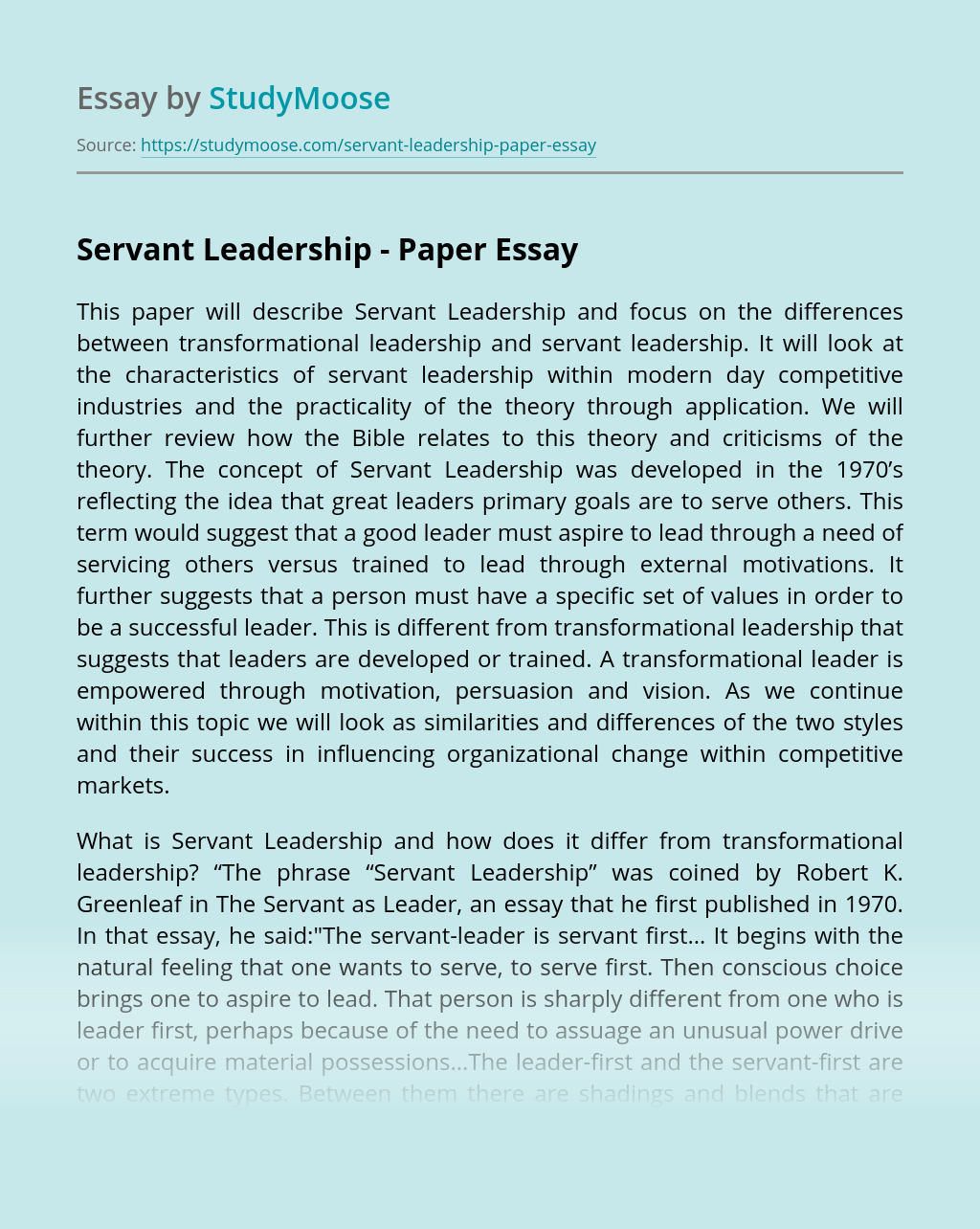