Changes and continuities of Roman empire

Between 500 BCE and 500 CE, the Roman civilization experienced changes both politically and culturally. Firstly, Rome’s government transitioned from a Republic to an Empire. Later, that empire was split into two parts; east and west. In terms of changes in culture, it was impacted by the shift in religion, as the Romans shifted from polytheism to monotheism. Despite all the changes, Rome still remained culturally diverse. The Romans overthrew the Etruscans in 509 B.C.E. The Etruscans had ruled over the Romans for hundreds of years.

Don't use plagiarized sources. Get your custom essay on
“ Changes and continuities of Roman empire ”
Get custom paper
NEW! smart matching with writer

Once free, the Romans established a republic, a government in which citizens elected representatives to rule on their behalf. The highest positions in the government were held by two consuls who ruled the Roman republic.

A senate composed of Patricians elected these consuls and at this time, lower-class citizens, or plebeians, had virtually no say in the government. Both men and women were citizens in the Roman Republic, but only men could vote. Under certain circumstances, the senate and the consuls could appoint a temporary dictator to rule for a limited time until the crisis was resolved.

One of the innovations of the Roman Republic was the notion of equality under the law. In 449 B.C.E., government leaders carved some of Rome’s most important laws into 12 great tablets. During the last three centuries of the republic, Rome experienced a long series of civil wars, economic as well as political issues, and civil crisis caused by the dictatorship of Julius Caesar. After Caesar’s death, another civil war broke out destroying what was left of the Roman republic.

Caesar’s adopted son, Octavian, joined forces with a general named Mark Antony and a politician named Lepidus. They took control of Rome for ten years as the Second triumvirate. The alliance ended in violence and jealousy. Octavian forced Lepidus to retire and then became rivals with Mark Antony. Octavian believed Mark Antony was plotting to rule Rome from Egypt, and another civil war erupted. Octavian defeated Antony and became the unchallenged ruler of Rome. Rome was at the height of its power from the start of Augustus’s rule in 27 B.C to 180 A.D. For 207 years, peace and prosperity resided over the Roman Empire, known as the Pax Romana. During this time, the empire spread 3 million square miles, and its population was between 60 and 80 million. The borders were also stable, since there were not any wars going on between Rome and other civilizations.

Since Rome was now an empire, this meant that the government would now be ruled by a single emperor instead of two consuls. Since one person was in full control instead of two, so there was no conflict over power, and there was no need for citizens to constantly elect people to rule. However, during Octavian’s reign he set up a civil service system. He paid workers to manage the affairs of government. Although the senate still functioned, civil servants from the plebeians and even former slaves actually administered the empire. The Romans were heavily influenced by the Greeks in various ways. One facet being religion, the Roman’s were polytheistic due to Greek influence and worshipped many of the same gods. The classical Greek and Roman gods rewarded excellence over mediocrity and did not truly offer any sort of meaningful after-life. However, around 300 CE a new religion started to spread throughout Rome.

This new religion being Christianity, a monotheistic religion, and a religion that believed that there was life after death and hailed Jesus as the son of God as well as the incarnation of God. In regards to life after death in the Christian religion, as long as you followed the faith and lived a virtuous life doing good deeds you would be rewarded heaven. But if one has led a life of sin, they would be doomed to spend the afterlife in hell. Those meek and seen as inferior in the Roman empire, the poor, slaves, and women felt elevated and empowered as everyone is equal in the eyes of God, in Christianity. When Christianity began to emerge, it was largely disliked as Christians refused to take part in the worship of emperors as the Romans did. It was this refusal that caused its practice to be illegal and those who chose to stick with the faith were prosecuted. Although people were being killed for practicing, Christianity started to become even more popular.

After seeing Christian martyrs risk their lives for the sake of Christianity, many Romans were compelled and attracted to the faith. Also, there were Apostles who traveled around the empire spreading the message of Christianity. Then in 312 CE, Emperor Constantine proposed the Edict of Milan that banned all laws against Christianity. That allowed people to freely worship, without the fear of harsh punishment. He eventually converted on his deathbed. Then in 392 CE, Emperor Theodosius made Christianity the official religion of Rome. Christianity went from being an illegal religion to the official religion of the Roman Empire. At the height of its power, Rome controlled the greatest empire ever seen in Europe at that time. Many of the conquered nations benefited from Rome. Roman public baths, roads, water supplies, all appeared in Western Europe. The sheer size of the empire was a major reason for the collapse of Rome.

In AD 284, the Emperor Diocletian divided the Roman Empire in two parts to make it easier to rule. He created the Western Empire and the Eastern Empire, each with its own leader. Diocletian faced more than just administrative problems. More and more military defenses had to be built across the whole empire. Maintaining an army to defend the border of the Empire from barbarian attacks was a constant drain on the government. Military spending left few resources for other vital activities, such as providing public housing and maintaining quality roads and aqueducts. Frustrated Romans lost their desire to defend the Empire. The empire had to begin hiring soldiers recruited from the unemployed city mobs or worse from foreign countries. Such an army was unreliable and very expensive. The emperors were forced to raise taxes and coin more money frequently which in turn led again to increased inflation. To add to that in AD 307, Constantine became emperor.

He moved the capital of the empire to a new city –Constantinople. Constantinople was much further east than Rome and firmly in the eastern empire. This left the western empire very vulnerable to attacks. The eastern empire was closer to the rich soil fertile crescent and was much easier to defend. The west began to deteriorate and went through what was known as a Dark Age. During this time there were no advances in technology, there was turmoil throughout the empire, and literacy declined dramatically. The Roman Empire went from being a thriving world power to two fragmented empires, with the west doing awful and the east maintaining some resemblance of its former glory. Despite the fact that Rome faced numerous changes throughout the centuries it still remained culturally diverse. The start of the Republic was shaped around many cultures. The idea for arches were taken from the Etruscans. The language was derived form the Latin speaking people in the area.

The religion, literature, and architecture were influenced by the Greek. During the heights of the empire, war was still ever present. The influence of Rome was spreading to nearby territories and new land was acquired. With the increase in land and population it was only natural for the spread of new ideas to occur. The emergence of Christianity would prove to be a defining feature of the Roman Empire. The fall of the empire produced two weaker half’s of a once formidable empire. The western side of the empire retained the Latin language and the eastern side chose Greek instead. The resulting wars with neighbors and influx of refugees contributed even more to exchange of languages and cultures. From the beginning of Republic, to the expanding empire, to the halves; east and west, Rome remained multi-cultural.

Ancient Rome went through dramatic changes from 500 BCE to 500 CE. It first underwent a change of government; shifting from a republic to an empire. Rome then changed culturally, from being polytheistic and believing in the Greek gods, to being monotheistic and believing in one deity and adhering to the guidelines of Christianity. Furthermore in 476 CE, the Roman Empire collapsed and split into two parts, and was governed by two emperors. Although Rome encountered a these alterations it still remained a multi-cultural civilization.

Changes and continuities of Roman empire. (2016, Apr 01). Retrieved from https://studymoose.com/changes-and-continuities-of-roman-empire-essay 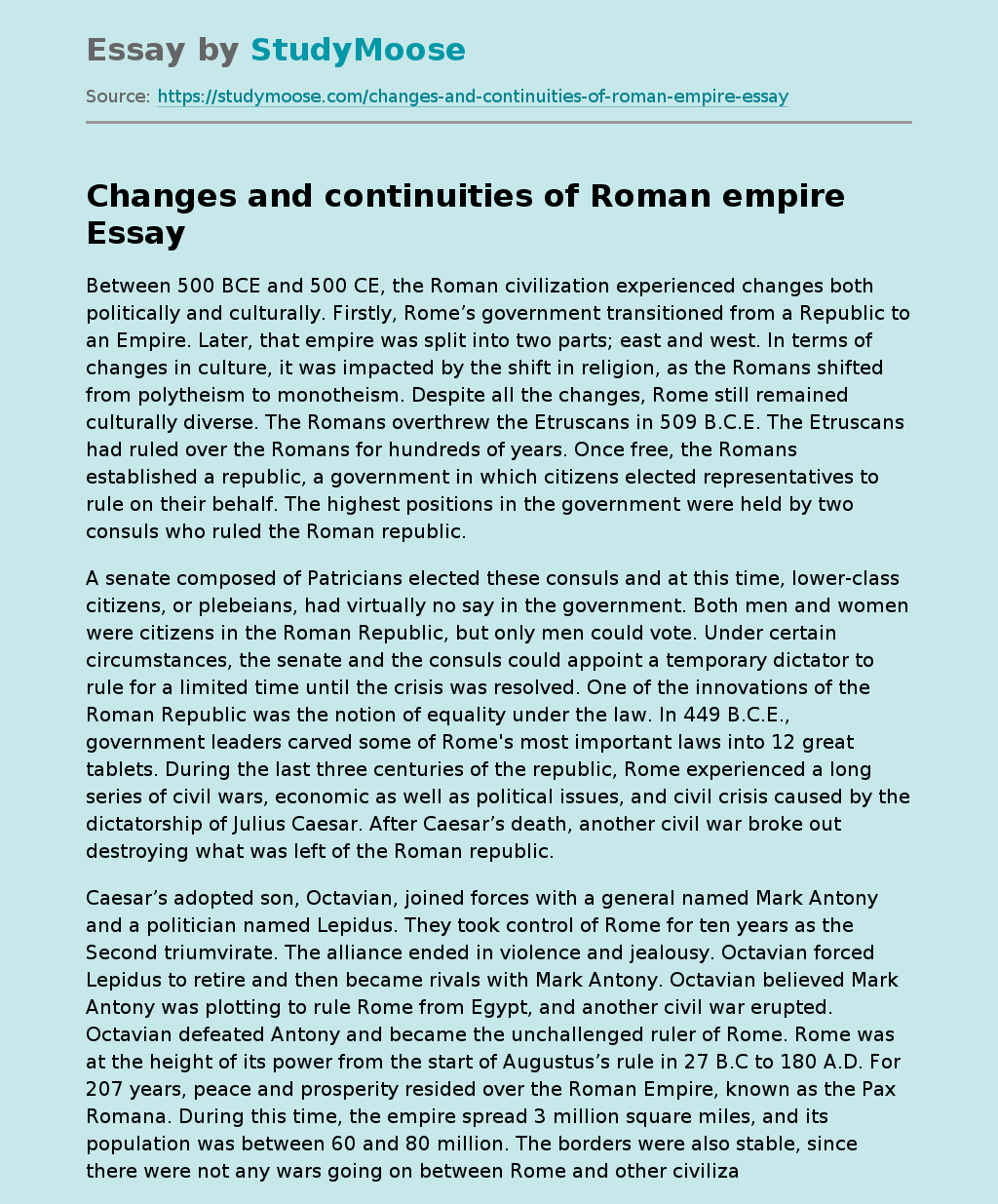