Katherine Mansfield illustrates in the story the protagonist Miss Brill as a middle aged women with no family that believes she has a social life, which consists of watching other people interact with each other. Mansfield parallels Miss Brill with the fur she keeps wrapped up in a box until Sunday. She demonstrates a dynamic character that receives a reality check from the “real” world where she belongs rather than in a chimerical world she made up. Mansfield creates a colorful character who symbolizes her old, worn fur and lacks the reality of the outside world.

Don't use plagiarized sources. Get your custom essay on
“ Miss Brill by Chacter Sketch ”
Get custom paper
NEW! smart matching with writer

Mansfield’s parallelism between Miss Brill and her fur shows the reader that Miss Brill stays in a box in a dark closet until Sunday when she “acts” in the play of the outside world. Mansfield describes the fur’s eyes asking “what has happened to me?” as Miss Brill had to “rub some life back into its dim little eyes ” after it sat in the box for some period of time.

Just like the fur Miss Brill stays bottled up in box in her apartment until Sunday when she goes to watch the band play. Both the fur and Miss Brill have aged and do not leave their perimeter until Miss Brill’s cue to enter the stage of the world.

Miss Brill forms a world of her own that she lives through. She sees all of the people she observes as “just coming from dark, little rooms or even- even cupboards. ” In reality Miss Brill is the one that hides in the cupboard from the outside world until Sunday when she liberates herself from the dark room. She lives her social life through the lives of the people around her.

She believes she interacts with the outside world and that she had a vital role in the play that the world undergoes. Miss Brill soon learns that her presence does not have a great impact on her peers as their presence does on her. During the performance of the band Miss Brill pays more attention to the conversations of the people she sits next to then the performance. As she ease dropped on a young couple she over heard them mocking her. Miss Brill realizes that she does not have the same importance to them as they do to her. Her chimerical world bursts as she becomes exposed to the real world and the realization of her importance.

The protagonist Miss Brill faces the antagonist of reality. She comprehends that she has lived in a fantasy world that revolved around her having the same impact on everyone as they do on her. If she did not come to an understanding she would have followed in the footsteps of the delusional Willy Loman who committed suicide. Mansfield parallels Miss Brill and her fur because both have aged and do not leave their boxes until Sunday. The story informs the reader that sometimes elderly and lonely people live in made up world and when welcomed back into reality have a hard time cooping with it. 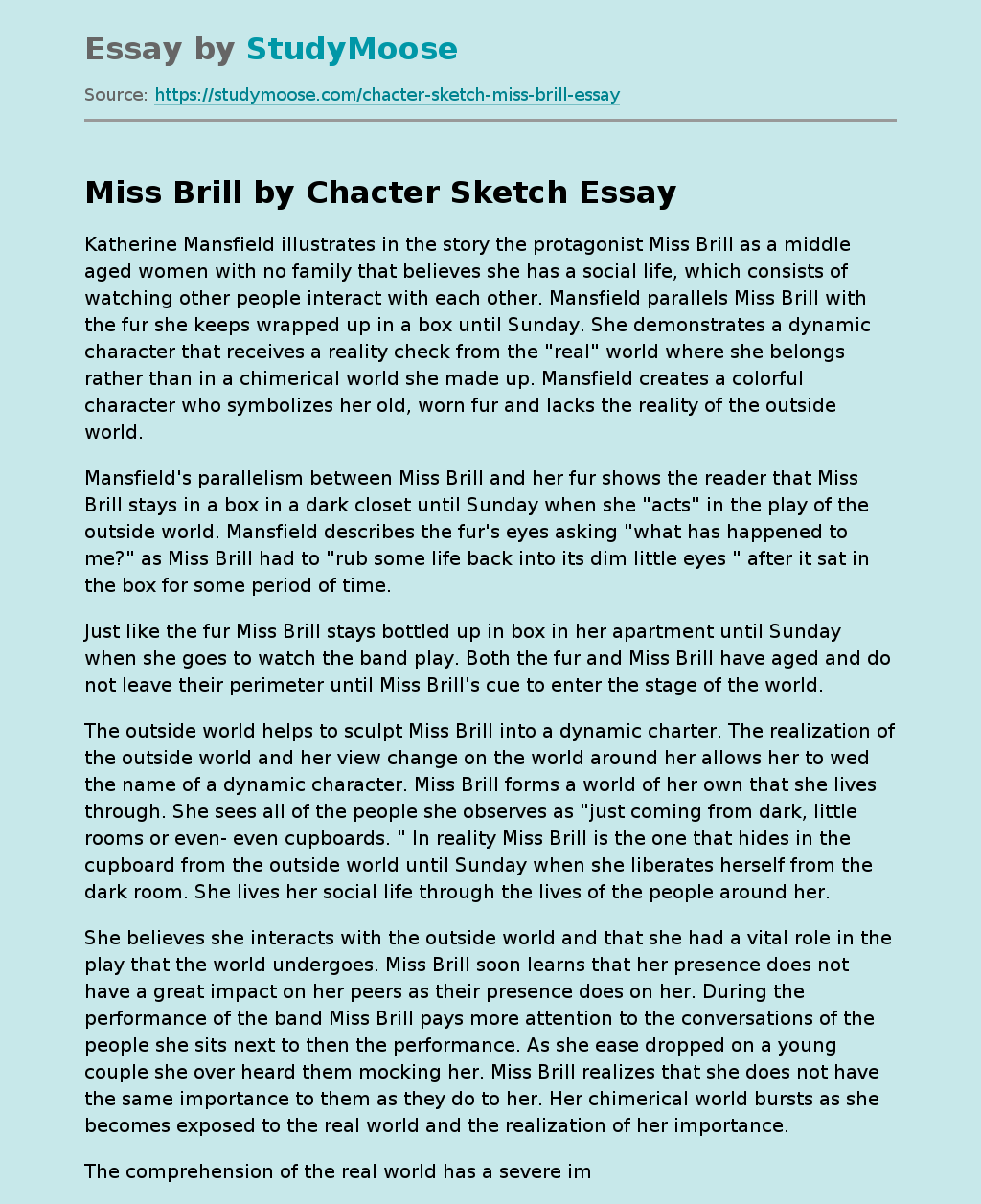