A Review of An Occurrence at Owl Creek Bridge

In all honesty, An Occurrence at Owl Creek Bridge was a bit confusing to read. It was not only confusing, but the ending was a surprise to the reader. In the story, we got to see many different aspects of the life of Peyton Farquhar. This story shows the difference that times were back then compared to now. In today’s would, a man would not be hung, let alone executed for tampering with a bridge. I also liked the part in the story of the betrayal of the soldier that appeared to be in the confederate army.

Don't use plagiarized sources. Get your custom essay on
“ A Review of An Occurrence at Owl Creek Bridge ”
Get custom paper
NEW! smart matching with writer

This showed that Farquhar was gullible and would do anything to get involved in the army, since he was not able to fight in it. At the end of the story, I was very surprised in finding out that Farquhar was really dead and his escape was just a figment of his imagination. The escape that he had watched in his mind showed how eager Farquhar was to get back to his home and his family.

I enjoyed the narrative style the story was written/told in. I thought that since the story was split into three different sections, it was easier to read, and all around understand. The narrator made the beginning of the story suspenseful because the reader wants to know why Farquhar was going to be executed. This technique wants us to keep reading on to find out the terrible thing that Farquhar did. In the middle of the story, we learn the reason he was to be executed was because he tampered with the confederate bridge, thinking it was going to help them.

The narrator did a good job of explaining what Farquhar was like and gave the readers a good mental picture of the situation he was in on the bridge.

There are several possible themes that could go along with this story. The specific theme that I would choose for this story would be the difference between reality and fantasy. The difference between reality and fantasy go hand-in-hand throughout this story. It is not until the end of the story that we see the difference of them in Farquhar’s life. When Farquhar describes his escape, we believe that this is really happening. Farquhar describes his escape in a lot of detail and talks about his desire to be back with his family and back at home. The difference between reality and fantasy also is seen with the soldier that pretends to be a Confederate. Farquhar believes that the soldier is a Confederate, therefore plans the hurting of the bridge. This ends up being the illusion that leads him to his execution. This illusion of the soldier caused Farquhar to damage the bridge was the reason of his demise.

This story did a great job of making you ask yourself, “what just happened” after reading the last few sentences. The narrators’ creation of Farquhar’s escape confused the reader, yet made it more interesting in the greater scheme of the story.

A Review of An Occurrence at Owl Creek Bridge. (2017, Jan 10). Retrieved from https://studymoose.com/a-review-of-an-occurrence-at-owl-creek-bridge-essay 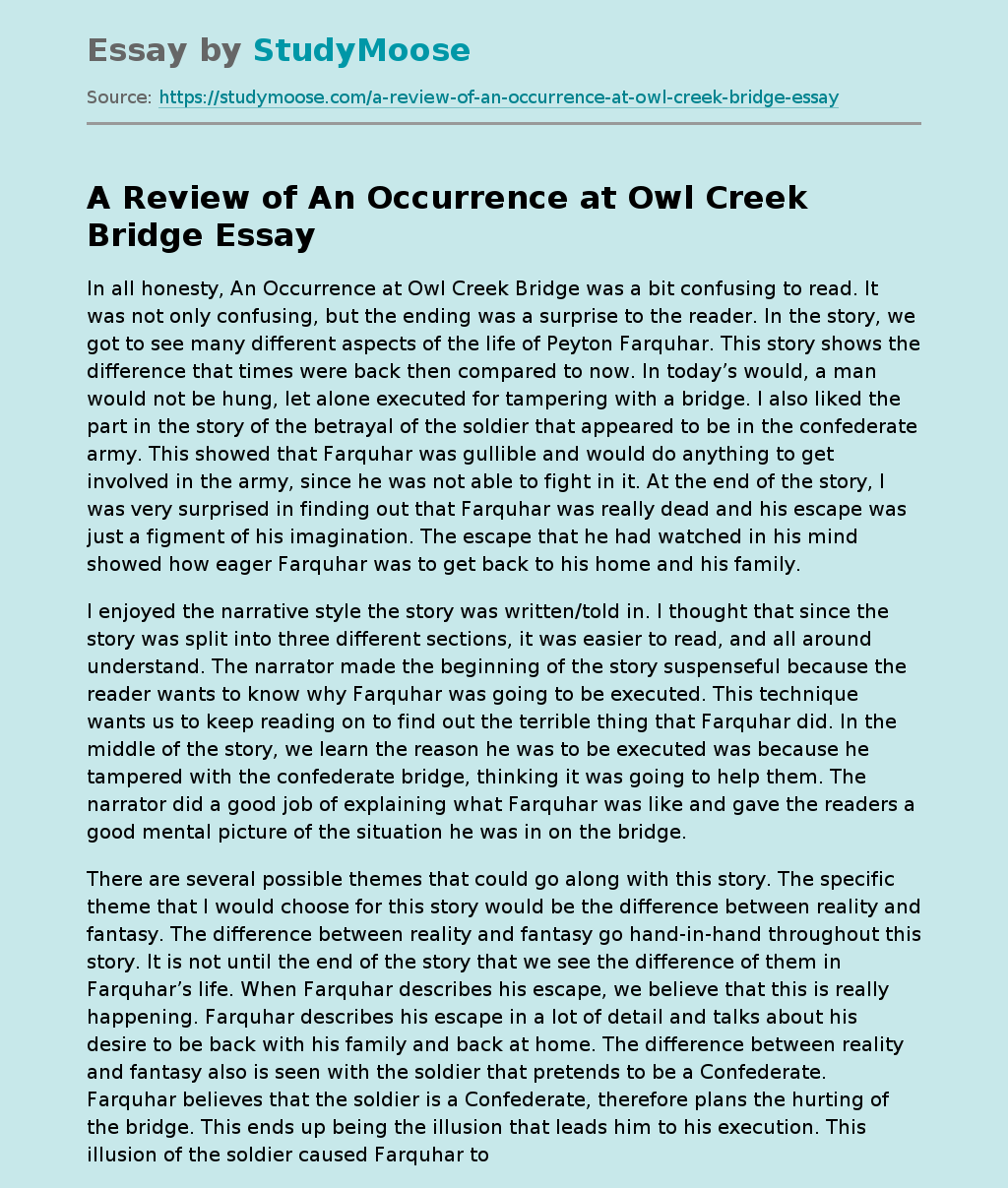