Technique of Foreshadowing in Bierce's An Occurrence at Owl Creek Bridge

In An Occurrence at Owl Creek Bridge, by Ambrose Bierce, the author expertly uses the literary technique of foreshadowing to give the reader a constant hint that good old Peyton Farquhar is going to be a corpse by the end of the story. I enjoyed the more subtle instances of foreshadowing because they, to me, better demonstrate the writer’s skill. For instance, foreshadowing is demonstrated through the reoccurring mention of Farquhar’s neck all through the story. His neck ached horribly.

Don't use plagiarized sources. Get your custom essay on
“ Technique of Foreshadowing in Bierce’s An Occurrence at Owl Creek Bridge ”
Get custom paper
NEW! smart matching with writer

” (Paragraph 18) and “his neck was in pain…”(paragraph 35). It is not revealed until the end of the story that our protagonist never escapes from the bridge, but the use of foreshadowing gives the reader hints of his fate beforehand. The technique of foreshadowing is one of the more interesting tools that a writer can use because it forces the reader to perform a close reading and have them guessing the whole time up until the climax.

Many readers question whether or not Farquhar is dead the whole time, right up until the end, because the foreshadowing makes them more intrigued.

Even the more obvious forms of foreshadowing can prove to be an entertaining tool. In the beginning of part III the narrator states that, “[Peyton] fell …through the bridge he lost consciousness and was as one already dead” (paragraph 17). Right in the text, it is stated that he is already dead, but that does not matter to the reader, who is intrigued by Farquhar’s escape and journey.

The fantastical elements which often seem unbelievable, for example, during his escape, is another way that foreshadowing is used to let the reader know that none of this magical adventure is actually happening, and in reality Farquhar is hanging dead from the bridge.

Farquhar states that, “It is as easy to dodge a volley as a single shot,” (paragraph 26) which is ridiculous. Overall, the story was made better by the expert use of foreshadowing, and was an entertaining read.

Technique of Foreshadowing in Bierce's An Occurrence at Owl Creek Bridge. (2017, Jan 19). Retrieved from https://studymoose.com/technique-of-foreshadowing-in-bierces-an-occurrence-at-owl-creek-bridge-essay 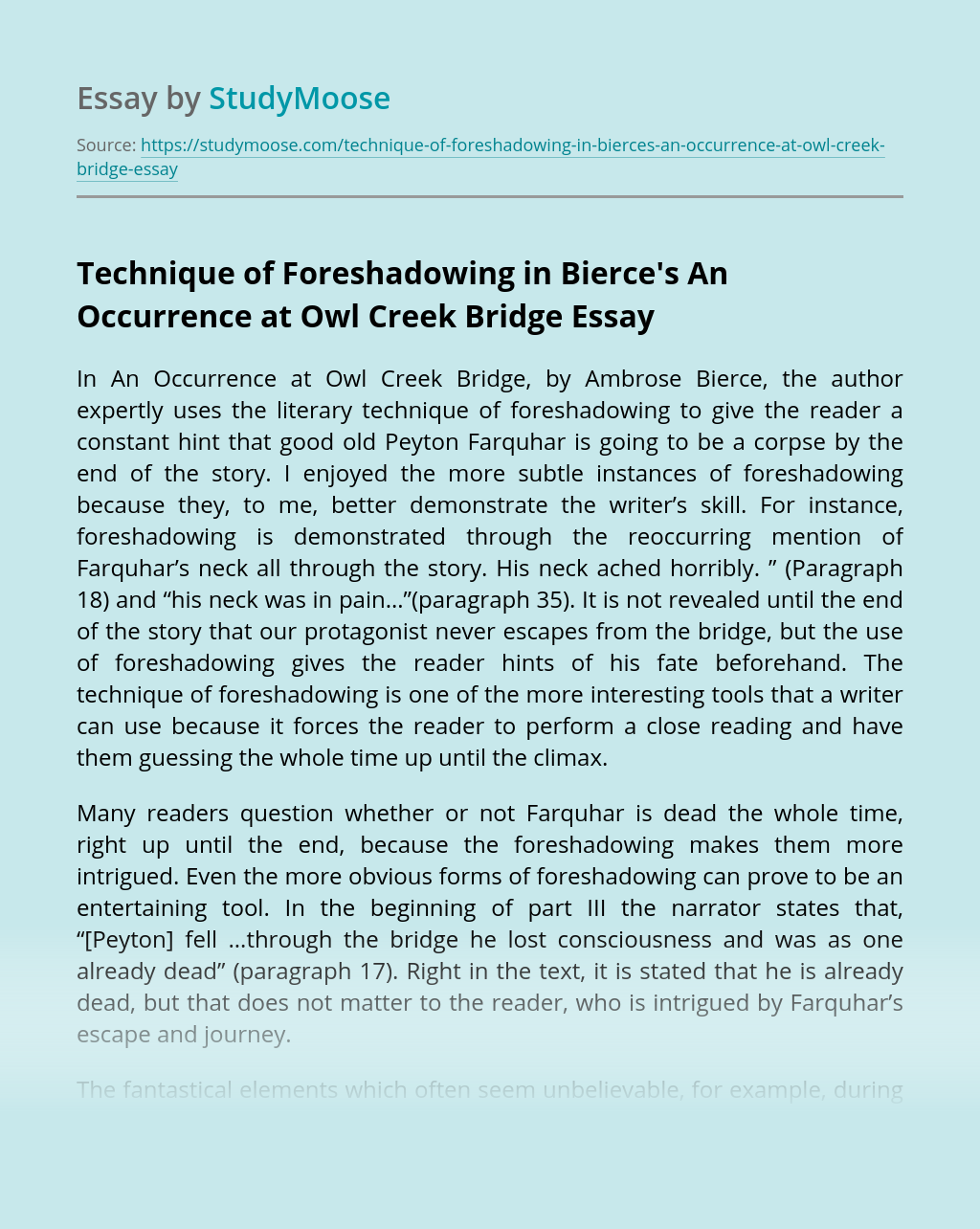