An Occurrence at Owl Creek

The wind made in the tree’s branches the music olian harps. ” Ambrose Bierce uses allusions and imagery to create a sense of wonderment and mysteriousness for first-time readers of his historical fiction story An Occurrence at Owl Creek Bridge. Within this short story, a man named Peyton Farquhar is being hung from Owl Creek Bridge for trespassing into Union territory during the civil war. As he is dropped the rope breaks and he makes his escape after dropping into the river below.

Don't use plagiarized sources. Get your custom essay on
“ An Occurrence at Owl Creek ”
Get custom paper
NEW! smart matching with writer

After swimming through gunfire and a vortex, traversing through an endless forest, and suffering thirst and weariness, Farquhar finally reaches his home.

Just as he is greeted by his wife, Farquhar’s world ends as his neck breaks and his body is hanging from the bridge. The sudden conclusion reveals the past events, starting from the rope breaking, was all a hallucination. While the ending shocks many first-time readers, second-time readers may recognize numerous instances of foreshadowing implemented into the figurative language used to create emotion.

Furthermore, he adds conspicuous allusions to Greek mythology. Lastly, Bierce formulates a very unnatural and vague setting around Peyton Farquhar as he is hallucinating. Veteran readers will notice these three key components of foreshadowing. “Suddenly he felt himself… spinning like a top” is an example of foreshadowing found in hallucination events. In the hallucination, Farquhar is spinning around in the vortex of water.

In the actual events, he is spinning as he is dropping from the plank. Other examples of this style of foreshadowing exist in the story. “… e could no longer close them [his eyes]” Conscious of the ending, veteran readers will view this quote as a sign that his neck is being constricted in real life due to the rope around his neck. Lastly, “He could no longer feel the roadway beneath his feet. ” shows that Farquhar is in midair, and close to his death. Readers of An Occurrence at Owl Creek Bridge may at first consider these texts as an emphasis on the weariness of the doomed man. However, these double as premonition for the sudden conclusion.

Allusions to a largely known fundament of Greek mythology, Hades, is tilized to further foreshadow the closure of the story. “The road was as wide and straight as a city street. No fields bordered it, no dwelling anywhere. ” this quote is a metaphorical reference comparing the scene in the Farquhar’s mind to the River Styx in Hades. The small instance of the word “fields” may refer to the Fields of Asphodel, also found in Hades of Greek myth. “Not so much as the barking of a dog suggested human habitation. ” This quote from the story is an allusion to Cerberus, the three-headed dog of the Underworld.

These particular citations all refer to Hades, which is broadly used as a symbol for death. Lastly, Bierce makes use of a strange and vague setting to give readers a feeling of mysteriousness and apprehension. This setting, found towards the concluding paragraphs of the story, also heralding Farquhar’s death. “He distinctly heard whispers in an unknown tongue… ” suggests paranormal entities envisioned around him. In this same setting, the “black” trees on both sides of the road formed “a straight wall”, creating a dark and morbid mood with the black trees and the “formal” configuration of the trees.

This bleak setting foreshadows death and instigates a feeling of eeriness. Rereading An Occurrence at Owl Creek Bridge with familiarity on the story can yield and uncover a myriad of clever and subtle foreshadowing the astounding denouement. Much of the foreshadowing is combined with plot elements, such as setting, suspenseful climax, and figurative language. Ambrose Bierce used the described techniques to contribute to the inconspicuous foreshadowing of the ending, and thus, recreated the meanings of his written words.

An Occurrence at Owl Creek. (2016, Dec 29). Retrieved from https://studymoose.com/an-occurrence-at-owl-creek-essay 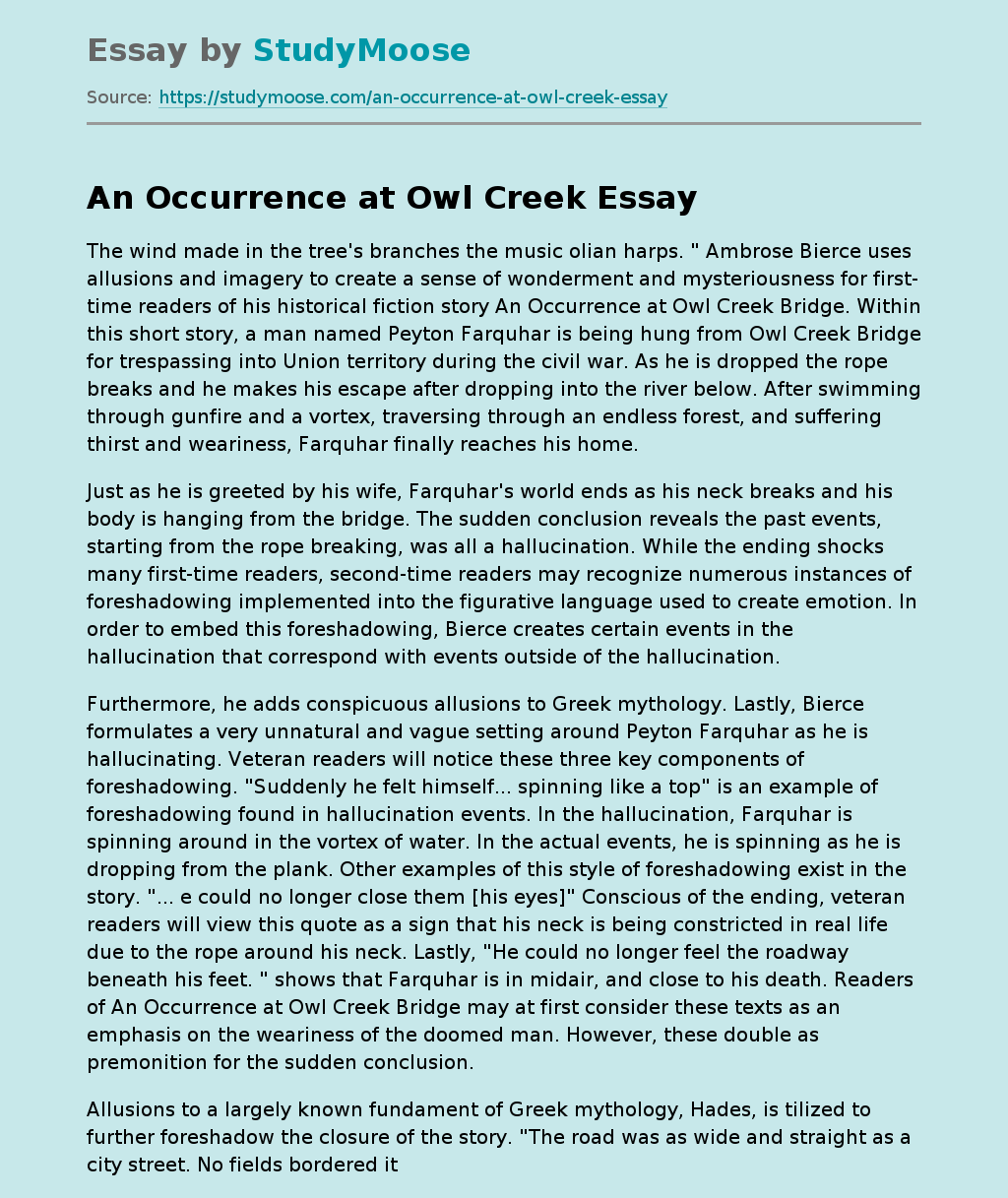