In the short story, “An Occurrence at Owl Creek Bridge,” Ambrose Bierce uses several descriptions and specific conversations between the round and flat characters to develop the main character traits throughout the story. Bierce methods do not give a word for word account of the character’s individual traits, because he wanted the provided descriptions to allow the reader to draw their own conclusions about each character’s purpose. His technique has produced one round character and a few flat characters that ultimately help develop the main character traits.

Don't use plagiarized sources. Get your custom essay on
“ An Occurrence at Owl Creek Bridge Short Story Overview ”
Get custom paper
NEW! smart matching with writer

The main character in the story is a man by the name of Peyton Farquhar. He is the round character because the whole story revolves around what is happening to this man. Most round characters can be classified as dynamic because they can recognize or can adjust to certain circumstances. In this case, Peyton, the main character is introduced to the reader after the situation had already occurred. The writer started off with Peyton about to be hung by the North for trying to stop them, because some Northern Scout dressed as a Confederate Soldier baited him into it.

This initial detail set the story up for a flashback to reveal his character developing into courageous man who was willing to do whatever it took to help the confederate, even if he was not supposed to.

The other characters presented in this story were the Sergeant who hung him, the Northern Scout, and finally his wife. Each of these characters can be classified as a flat character because they are not dynamic in any way, because each one only provides one role throughout the whole story.

His wife is probably the most important flat character because she is the reason he reflects on his past and comes to a final realization before he dies. The thought of her, which the reader doesn’t know is a thought until the very end, allowed Peyton to also develop his character into something he wished he could have been. The sergeant in the beginning merely plays the role of a typical soldier and takes everything he does very seriously. He could be classified as a stock character because his role is a common stereotype of a soldier. Finally, the last character described in the story was the messenger. His role was simply to act as the transitioning character that led the main character to end up dead.

Overall, Bierce’s use of different characters to help develop the main character played a huge role in the development of the story. It helped the reader believe that Peyton really did escaped and become the man he wanted to be for his wife, even though he never really escaped. The different dimensions drew the readers attention and essentially told us that Peyton finally came to a self realization once it was too late. 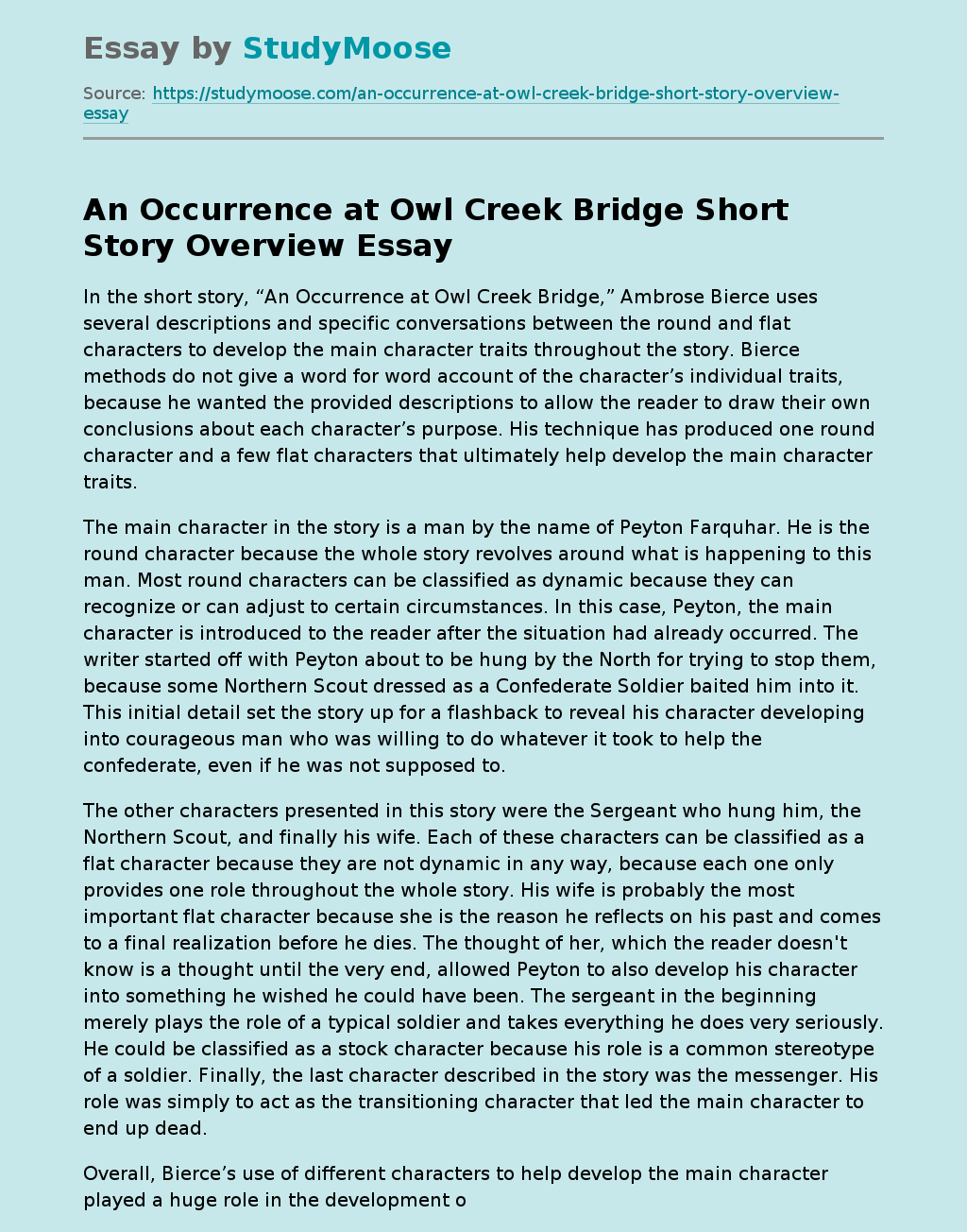