Cell Phone Addiction: Is It Really a Thing

Although cell phones allow people to access unlimited information on the internet and connect with others, there are many consequences to using a phone constantly. Now, why are people addicted to such a small electronic device? Could it be social media, Games, Online content, or texting? The reasons are endless! Most modern-day teens are addicted because of social media and/or games, and it’s not their fault! Cell phone addiction can kill many people due to distracted driving. The one thing that intrigues me is addiction itself and how it takes a toll on our brains and emotions.

Don't use plagiarized sources. Get your custom essay on
“ Cell Phone Addiction: Is It Really a Thing ”
Get custom paper
NEW! smart matching with writer

It’s absolutely terrifying! In this essay, I will be addressing the issues surrounding cell phone addictions and why most people are addicted.

Phones can cause severe addictions, accidents, depression, self-harm, etc. When a person hears their phone make a notification sound, it’s a habit for people to just pick it up and look at it. And if their driving, that can cause a lot of harm to that person or others if they get into an accident.

There are over 1000 injuries a day because of people being on their phones while driving. In conclusion, there are many consequences of being addicted to a phone, like distracted driving, which happens too often. A bigger issue is people being so addicted, it causes many problems to the brain and can ruin a person’s life.

Addiction takes control of the brain. And when a person is addicted to their phone, a lot of things happen to the brain that can ruin a person’s life.

If a person is on their phone, they are in a zombie-like state of mind and they don’t move at all. The brain needs fresh air and physical exercise in order to function properly. Without that, it will slow down the development of the brain. And if the brain is underdeveloped, it will cause people to be very fidgety, lose sleep, have more emotional outbursts (due to less control of emotions), anxiety, etc. All these symptoms occur during any addiction. People who are addicted to their phones have more GABA in their brains. GABA slows down neurons which results in worse attention spans and makes a person distracted more easily. What I’m trying to say is, a cellphone addiction can mess up the brain in a way that is terrifying! Lots of modern-day teens are addicted to their phones because the colors and sounds from games and social media, which will lure the brain in, trap it, then form an addiction.

Social media and games have become very popular among teens and children. With all the different things you can do, it’s no wonder why people are addicted to these certain apps. In each app, there’s a popular marketing strategy to get people hooked. I will admit, it’s quite genius! They manipulate the brain by mainly using colors and sounds that will attract the brain to whatever is going on. The developers of apps study bits of the brain and find a frequency that the brain is attracted to. It’s like the gambling strategy, where they use the lights and sounds to attract people to a game and get them addicted. This marketing strategy is more commonly seen in games, but some social media apps use this strategy as a way to get people hooked on their app, this gets more people using the app, and finally, makes them more money! So basically, the company manipulates the brain by using certain things that the brain likes, and by putting it into their app. It gets people hooked!

It isn’t always easy fighting an addiction, but it is possible! A cell phone addiction is by far one of the worst addictions out there because it causes severe anxiety, accidents, depression, self-harm, and even slows down the brain. It makes people’s neurons slow down due to the screen activity and it will mess with the development of the brain. The colors and sounds are what draw the attention to the brain and makes it addicted to what’s on the screen. Cell phones have changed the world, but for better or for worse?

Cell Phone Addiction: Is It Really a Thing. (2020, Sep 11). Retrieved from https://studymoose.com/cell-phone-addiction-is-it-really-a-thing-essay 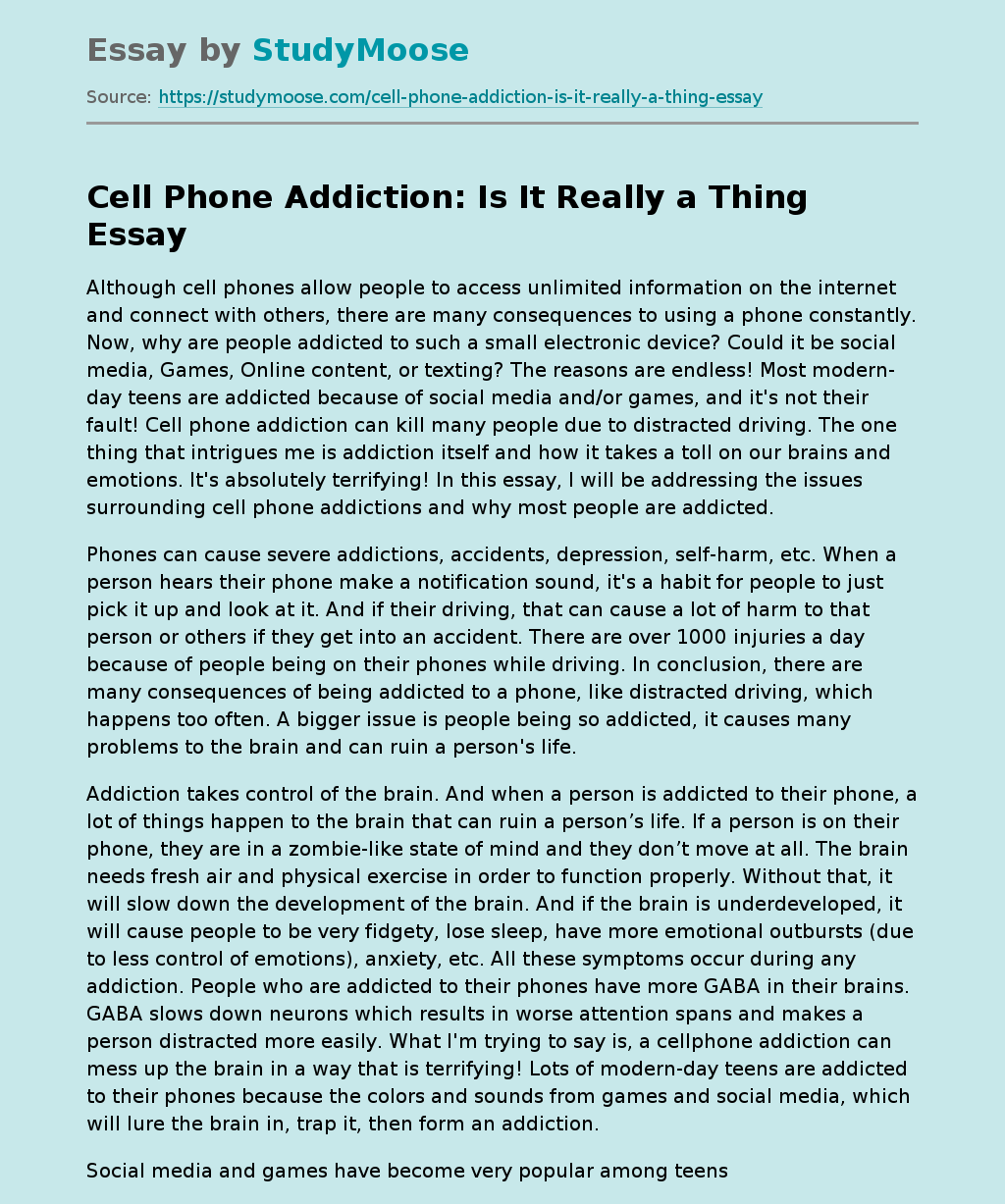