The colonists had endured much turmoil before the 1770s. Colonists had to fight the Native Americans and Spanish for their land. Furthermore, there was the French and Indian War in which the colonists joined forces for the first time to defeat the French and Native Americans for their land. It was during this time that the colonists learned that if they worked together, they were capable of achieving things on their own, without the help of the British. There is not one simple cause of the Revolutionary War but events that create a chain reaction.

Don't use plagiarized sources. Get your custom essay on
“ Causes of Revolutionary War DBQ ”
Get custom paper
NEW! smart matching with writer

These events are as follows: the Stamp Act and taxation, colonial unity and resistance to this taxation, and Great Britain’s response to the colonial resistance. An initial cause behind the Revolutionary War was the Stamp Act passed in 1765 by the British Parliament.

D). Furthermore, the colonists were not just taxed on paper and official documents. They were also taxed on tea, and according to a biography on Paul Revere, “taxing such a vital beverage sparked continued hostility” (Doc. E). This hostility increased and spread amongst the colonists which lead to much resistance and confrontation. The colonists were livid at the taxation imposed by the British. Many colonies held protests against these taxes (Doc. G), and one colonist, Thomas Paine, published a pamphlet titled Common Sense which “urged Americans to declare independence from Great Britain” (Doc.

This “paved the way for the Declaration of Independence” (Doc. C). Moreover, there were inter-colonial organizations that coordinated these protests and much more. For example, the Sons of Liberty were very influential in colonial resistance. They “plac[ed] themselves between the colonial leadership and the mob” (Doc. B), the mob being the enraged colonists in the streets. As a result of this resistance, Great Britain was forced to take action, not only in the colonies but in parliament as well. As the colonists raged on, the British were forced to act in perseverance. Take for example the Boston Massacre. The colonists were rioting in the street and antagonizing the British soldiers.

Captain Thomas Preston responded to this by ordering his men to “load their muskets” (Doc. H), and as a result of this five colonists were killed by British men. Furthermore, Parliament was required to act after the Boston Tea Party. The Boston Tea Party was when colonists dressed as Native Americans and dumped British tea into the Boston Harbor, and “the result of the Boston Tea Party was a greatly angered British parliament, which responded to the rebellion by closing the port of Boston and dissolving the authority of local courts” (Doc. E). These acts were known as the “Intolerable Acts.” The American Revolution was a war in the making ever since the French and Indian War. Beginning with the numerous taxation laws, which led to much resistance from the colonies, causing more taxation and laws from the British, eventually the colonists had had enough and started a full-scale rebellion which led to the foundation of the United States of America. 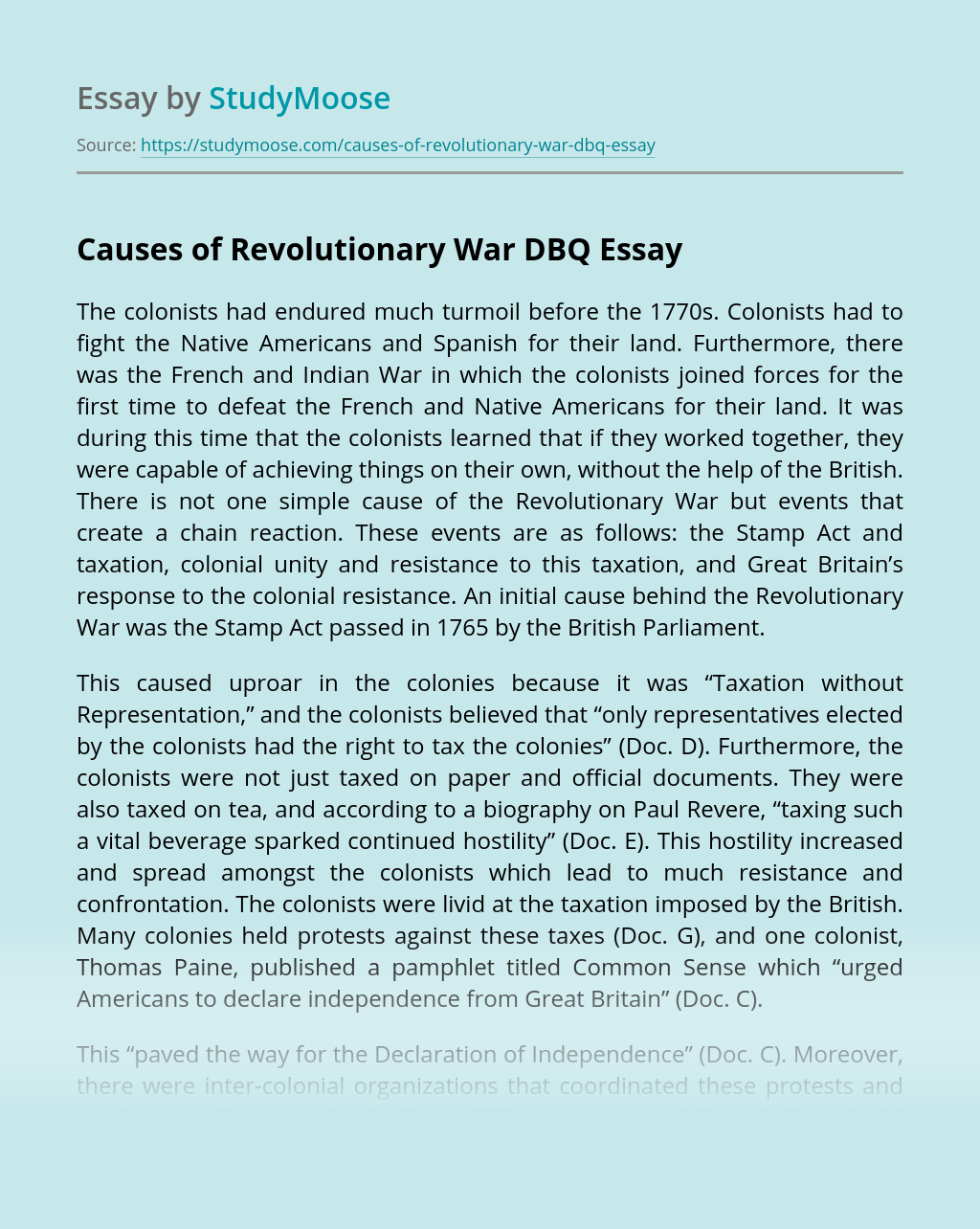