Boeing is currently operating with the majority market share of the commercial sector of aircraft manufacturing. Frank Shrontz, our CEO, has recently stated his goal to increase the company’s return on equity from its current average of 12%. The following summary will delve into the most appealing project for the future of this firm: the 777 aircraft. The purpose of this new product is to maintain our competitive advantage in commercial airline production by completing a family of Boeing airplanes.

The following net present value analysis will be used to determine the potential profitability of the 777 project.

Our analysts concluded that a levered equity beta of 1.2939 was appropriate for the commercial division of Boeing. The levered equity beta was important to use due to its representation of the capital structure of Boeing and its value to the WACC calculation. This equity beta was calculated by removing the financial risk of four similar defense-oriented benchmark companies (over half of all revenues from their respective defense divisions).

The Value Line betas of Lockheed, Northrop, Grumman, and McDonnell-Douglas were unlevered using the following formula U = (L) / (1+(1-t)(D/E)). The betas of these firms are important because by using the pure play approach, we can calculate an accurate equity beta for Boeing. Several adjustments must be made however, and those are discussed in the remainder of this paragraph. Once averaged, the Value Line betas equaled 0.4758.

The next step required unlevering the total Boeing beta, which was found at 1.00. The formula used to unlever Boeing’s beta U = (1.

00) / (1+(.66*.018)) = 0.9883. With the two betas we have calculated, Boeing’s unlevered commercial beta could be found. We found that the percentage of revenues derived from the defense division was 26%. The following formula provided the answer to Boeing’s commercial beta:

The market risk premium is 5.4%. When these values are plugged into the previously stated SML equation, the cost of equity is (0.0882 + 1.2939*(.054)) = 15.81%. The return on equity for all-equity financing would be 15.13%. The only difference in the formula would be the use of the unlevered commercial beta 1.1683 instead of the levered commercial beta of 1.2939. This discrepancy between the two RE calculations makes sense because levering up increases the cost of equity.

With all of the pieces of information our analysts gathered, the net present value (NPV) of all future cash flows could be found. Boeing has estimated the selling price of each 777 will be $130 million and includes adjustments for inflation over the time horizon of the project. After calculating the NPV over the 35-year project horizon, our analysts found it to be $1,736.34 million. Against our hurdle rate, the Boeing 777 project is very attractive. The key to this project being economically attractive is that the return outperforms inflation to provide real value to the firm.

The sensitivity analysis provided reveals several gambles made by Boeing. They include the use of the highest estimated selling price per plane, units per year, rate of price increases, and market size among others. Even with all of the risks and estimations, Boeing should launch the 777 in October 1990 because the firm must not only stay competitive but keep their market share in the future. While the 777 project represents a huge risk with high levels of capital, it is a necessary risk since other firms are also completing their full product lines of airplanes. Also, the introduction of a derivative after 10 years and reduction in R&D costs could provide additional sales revenue and further affect the NPV of the project.

While this project was certainly a gamble for Boeing in 1990, hindsight shows they made the right decision in creating the new 777. In October of 1990, right after the project was implemented, United Airlines placed a $28 billion order therefore “cementing the program Boeing was close to scrapping.” By March of 1994 they were already loaded down with 147 firm orders and 108 options with expectations of quickly increasing numbers. In June of 2008 it became evident that this aircraft had the differentiating ability to beat out its competitors.

Headlines read “Boeing under intense pressure to increase production of top-selling fuel thrifty 777-300 ER…as airlines struggle with the soaring price of fuel.” In November of 2007 production of the 777 was sold out through 2012 and just 6 months later all remaining 2012 and 2013 slots were filled; the next available date for a new order was in 2014. Boeing officials stated they were “experiencing unprecedented demand” and were “producing at a rate of 7 [aircraft] monthly.” In November of 2011 the 777 became one of Boeing’s best-selling models, and on March 5, 2012 United Arab Emirates, the largest operator of the 777 with a fleet of 102, purchased Boeing’s 1000th 777, surpassing the numbers they forecast back in 1990. 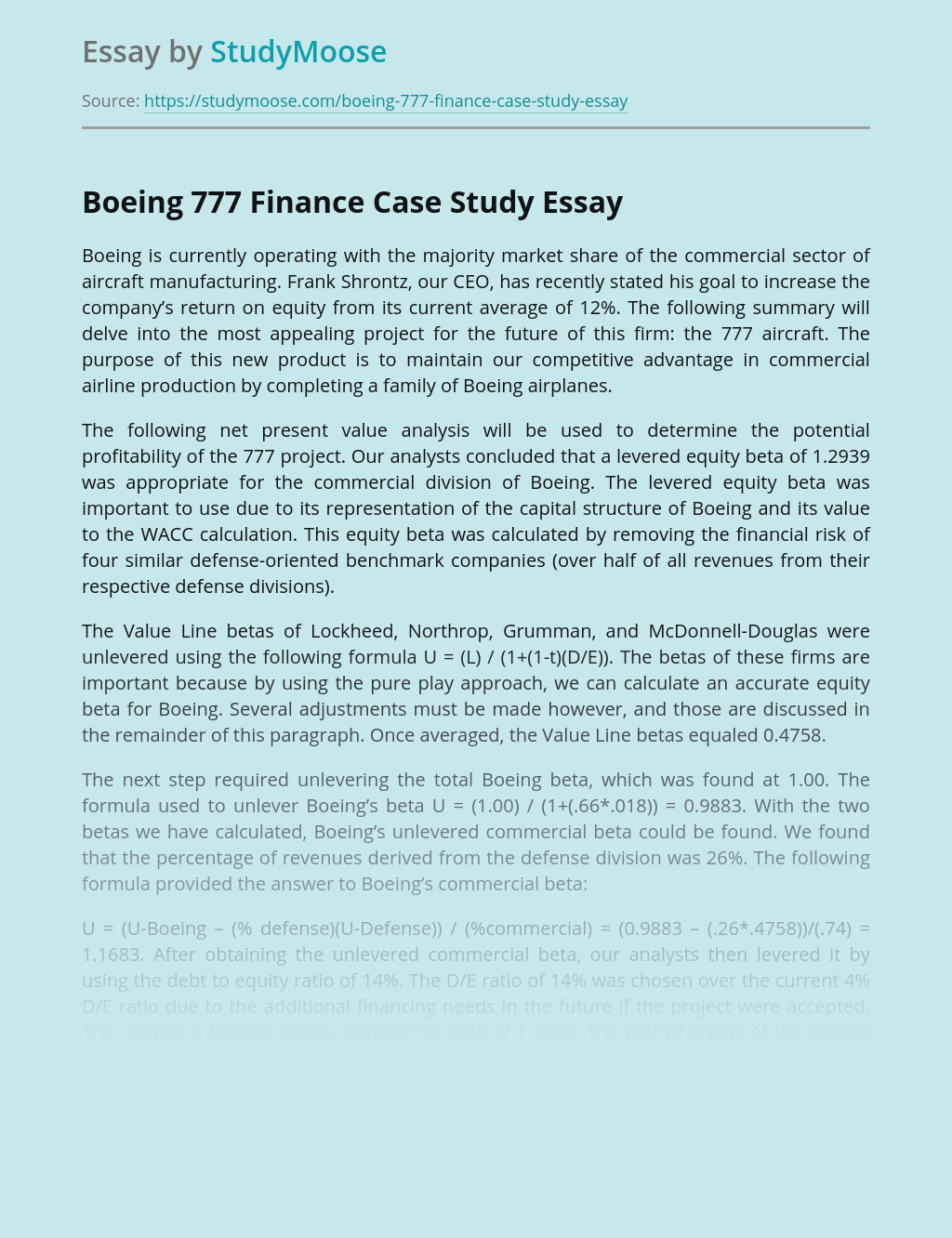