When Boeing’s new aircraft dubbed the Dreamliner was taking shape, the company decided to outsource 70 percent of components to manufacturers in many nations around the world (Hill, 2013). The risks associated with such a complex logistical and management tasking were severely underestimated, and it has cost the company billions, and a stain on its reputation. What are the benefits of outsourcing so much work on the 787 to foreign suppliers? The benefits of outsourcing are primarily cost driven, but also include efficiency, and flexibility.

Outsourcing reduces costs in several areas of a project; overhead, development costs, and production costs, and increases the efficiency by cutting down the development time. By selecting partners to assist Boeing in producing the parts of its new aircraft, the company hoped to share the $8 billion development cost (Hill, 2013). If all parts were produced in house the entire “bill” would be charged to Boeing. The fixed costs of a smaller operation are also reduced compared to a larger operation.

By outsourcing, the firm ensured its fixed costs would not be raised. Overhead such as office space cost, amount for a large portion, and by limiting the number of employees involved in the development of the 787, Boeing cut its costs. The production cost reduction helped the company save money by producing parts where it is most cost efficient to do so. Lower labor costs, and economies of scale for contractors, allow them to produce parts at a lower cost than in Boeing would set up production of all the parts from scratch.

By spreading the design of so many parts to different companies Boeing hoped to cut down the time it takes to develop the aircraft from six to four years. What are the potential risks? The risks associated with outsourcing include poor quality, failure to deliver, and lack of control. Contractors, who were selected as partners by Boeing, were located in many parts of the world, and differences in culture accounted for problems with quality, and the stringent deadlines.

The Italian company Alenia, encountered a problem with bureaucracy in its attempt to build a new factory, and once that delay was resolved the initial fuselage parts did not meet quality standards (Hill,2013). The cultural take on quality and deadlines is much different in Italy, and Boeing failed to recognize a potential problem. Many of its other key partners also failed to deliver the required components on time, and the company did not mitigate that risk by contracting multiple firms for the same part, but instead “put its eggs in one basket”.

The lack of control of the development of the components is yet another risk of outsourcing. When Boeing released the responsibility of making parts of the 787 to contractors, it placed a trust in them, but it gives the control of the entire process to that company. The resulting problems with quality, deadlines and process control caused all of the delays. Boeing was not involved deeply enough, in the making of its critical components, which would allow some oversight, and it backfired. Do benefits outweigh the risks? In the case of the 787 the benefits outweigh the risks.

Although Boeing has had problems with meeting deadlines, and quality issues with its partners, it has outperformed its major rival Airbus. The cost reduction and the unique design which makes the Dreamliner 20 percent lighter, have make the aircraft very popular and for the first time since 2002 Boeing has surpassed Airbus in the number of aircraft deliveries and in total orders (Marquart, 2013). The management team of Boeing has more than made up for the mistakes, and its marketing and market analysis proved superior to its competitors.

What are the causes of the management issues publicized in 2007 and 2008? Much of the problems were caused by the complex supply chain of Boeing and their oversight monitoring them. Boeings 787 project had nearly 900 suppliers and some of them had difficulty to meet the projects delivery schedule. Overseas suppliers had their own domestic challenges such as Italy Alenia’s whom are given responsibility to manufacture middle fuselage had difficulties to build their factory due local regulations. Secondly parts that were delivered to assembly line were not to the mark of Boeing standard and quality.

To make matters worse Boeing found that many components were not fitted as per requirement and assembly manual were in foreign languages. This was mainly due to Boeing suppliers did not have the experience to undertake massive project like building a commercial aircraft. Some of the main suppliers which Boeing ranked them as tier 1 suppliers had actually had outsourced mission critical jobs elsewhere making control and coordination difficult. For example Vought Aircraft Industries had outsourced the design and building of floor pieces to an Israeli company which in turn had trouble to comply Boeing quality standard.

This was due mainly because this subcontractor reports to tier 1 supplier rather than Boeing. What can a company like Boeing do to make sure such problems do not occur in the future? Boeing has surely learned a valuable lesson and is unlikely to make the same mistakes again. Management and coordination of suppliers should be handled by a team of experts from Boeing. The contracts should also be structured in ways that give the company more control of the production process, and for the contractors to inform if any part of their order will be further subcontracted.

Performance review of every contractor should be done periodically to foresee any potential problems, to be mitigated before they cause delays. Contracting more than one supplier for each part, to mitigate risk associated with one company being the failure point, is also another way to manage the potential problems. The biggest problem in my opinion was the lack of a central design blueprint, which had precise component design and dimensions. Instead Boeing allowed the companies to create their own design which cause problems at the assembly plant. Many components did not fit together.

In the future Boeing should give exact product dimensions to the suppliers to prevent this (Hiltzik, 2011). How should Boeing respond to critics claiming, it is exporting American Jobs overseas? Boeing can easily rebuttal these claims, to show that proceeding with its outsourcing plan, has for the first time in a decade enabled them to surpass its main rival Airbus. This plan is obviously working. The second fact is that many of the products outsourced from its Seattle plant went to other American companies, such as Vaught Aircraft Industries, and not only to foreign suppliers.

The third argument is that Unions have made it expensive and inefficient to produce certain components at home. US has lost its competitive advantage, because of high labor costs. The high costs have forced companies to look for savings by outsourcing, and limiting their home soil operation to only assembly. Other countries have become more efficient at producing certain components, and Boeing is only attempting to use the best possible experts in building its airplane.

While some see the Boeing 787 Dreamliner as a outsourcing fiasco, it has proved the opposite. While the risks could have been mitigated with a bit more planning and oversight, it has given Boeing the advantage it needed to edge out its competition and secure enough orders for its aircraft to ensure economies of scale will make the 787 profitable. Problems with suppliers, have made the company more cognizant of what it has to do to ensure future success, and atop of other benefits, the learning experience will benefit Boeing most. 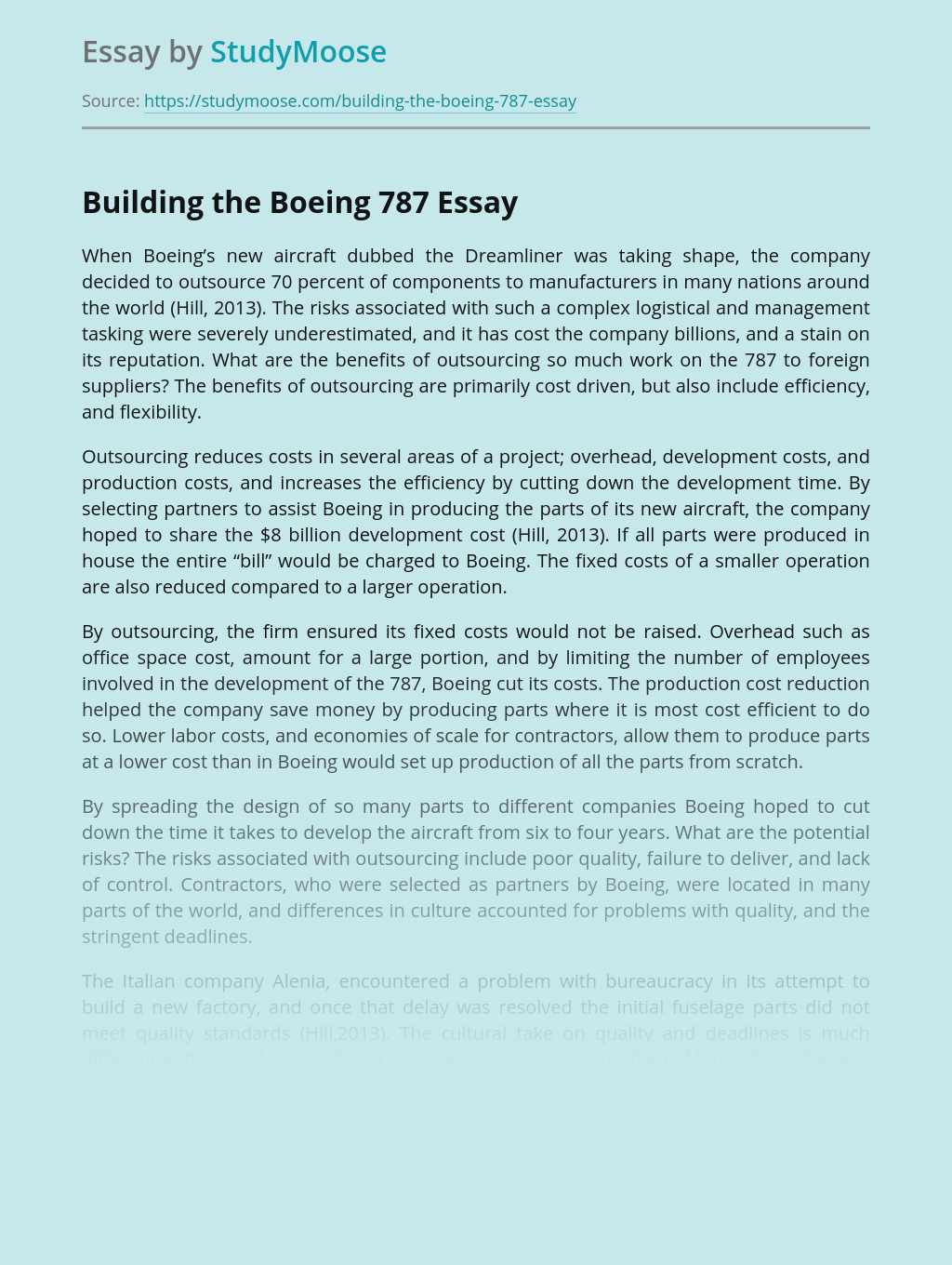 Don’t waste time
Get a verified writer to help you with Building the Boeing 787
Hire verified writer
$35.80 for a 2-page paper
Stay Safe, Stay Original