Airbus and Boeing both compete in the highly competitive industry of manufacturing commercial aircraft. Over the years they have each controlled the market at differing times due to competitive advantages – an ability to create value through a company’s strategies and operations that its competitors cannot (ref – Strategic Management textbook , pg 22)

Boeing, formed in 1916 by William Boeing and George Westervelt, dominated the industry until the 1970’s, when Airbus was organized through a collaboration between Britain, France and West Germany.

Airbus began manufacturing the A-300 series which enabled them to capture 10% of the market share by 1975 (ref article), no small feat considering they were competing against the giant Boeing.

Don't use plagiarized sources. Get your custom essay on
“ Airbus and Boeing ”
Get custom paper
NEW! smart matching with writer

Political – Airbus was a product of a merger between three European countries; Britain, France and West Germany. In the 1970’s the political climates of all three were relatively stable. The three countries worked together in order to compete with the US. They did have to adhere to international trading policies and agreements (NAFTA, GATT). Economic – As they were competing largely in the US market, Airbus needed to constantly keep an eye on interest rates; their aircraft were manufactured in Europe but sold primarily to US airline companies. They had to focus on macroeconomics (international) as well as microeconomics (national issues).

Sociocultural Factors – There were a great deal of social and cultural issues at work within Airbus’ structure; three countries were involved in design, production, manufacturing and financial issues and at times this proved to be a hindrance in decision making. Technological Factors – From a technological standpoint, Airbus established a competitive advantage over Boeing as they frequently implemented the use of computers in the design and manufacturing of their airplanes. Environmental Factors – Environmental issues affecting Airbus would include high energy costs in the manufacturing process, minimizing aircraft and manufacturing site emissions and waste. Legal Factors – Legal implications involved adhering to international trade policies and worker’s rights.

Strengths: Airbus’s strengths included their superior design and manufacturing processes; their ability to produce more fuel efficient aircraft which allows airlines a cost per seat savings; their avoidance of union issues within their workforce and the cost savings benefit of having four exploitable partners. Weaknesses: Airbus’ weaknesses included an inability to obtain financing for every project; the high costs of implementing new products, Opportunities: Opportunities which exist to increase market share for Airbus include new products that Boeing may be unable to compete with.

Also designing more fuel efficient planes could produce a lower cost per seat for the airlines. Threats: Airbus’ main competitor is Boeing who has shared market lead with Airbus on and off over the past decade or so. Threats could also come in the form of another competitor emerging (not highly likely due to the extremely high entrance costs into the aerospace industry), threats could also come from changes in economic conditions which could decrease air travel and lead to less orders for new products from airlines.

Threat of New Entrants – The scale of investment that is required to enter the aircraft manufacturing industry, as well as proprietary technology, makes the threat of new entrants quite minimal. Threat of Substitutes – Threat of substitution exists in competition designing a superior model. Buyer Power – The buyers in the commercial aircraft industry are the airline companies. They have a great deal of power as they comprise the majority of purchasers in the industry. Airbus and Boeing must manufacture planes the airlines will be able to profit from; this gives the airlines negotiating strength. Supplier Power – As Boeing and Airbus are the two main manufacturers of aircraft they maintain some power, but as the airlines have a choice as to which firm to purchase from, the balance of negotiating power lies with them.

An industry competitive advantage exists when a firm is able to manufacture or produce its product more cost efficiently than its rival(s) or produces a product that is superior through differentiation. In the article “Airbus – From Challenger to Leader”, Airbus maintained a competitive advantage over Boeing through a superior and more sophisticated production process that allowed them to assemble aircraft in fewer hours and with less workers. The company also maintained a competitive advantage through a superior design process that utilized computers and by offering a wider variety of models that were more on par with airline demand.

One of Airbus’ capabilities that provided them a competitive advantage was their design and manufacturing process. It was valuable because it allowed them to incorporate technology and efficient production through their use of computer design and a line-manufacturing method of assembling aircraft. This advantage was rare because it was unique to the company and not readily available to competitors. Due to the extremely high costs involved in creating Airbus’ design and manufacturing process, it was not easy to imitate or substitute. Airbus effectively exploited these capabilities which allowed them to gain market share against Boeing. 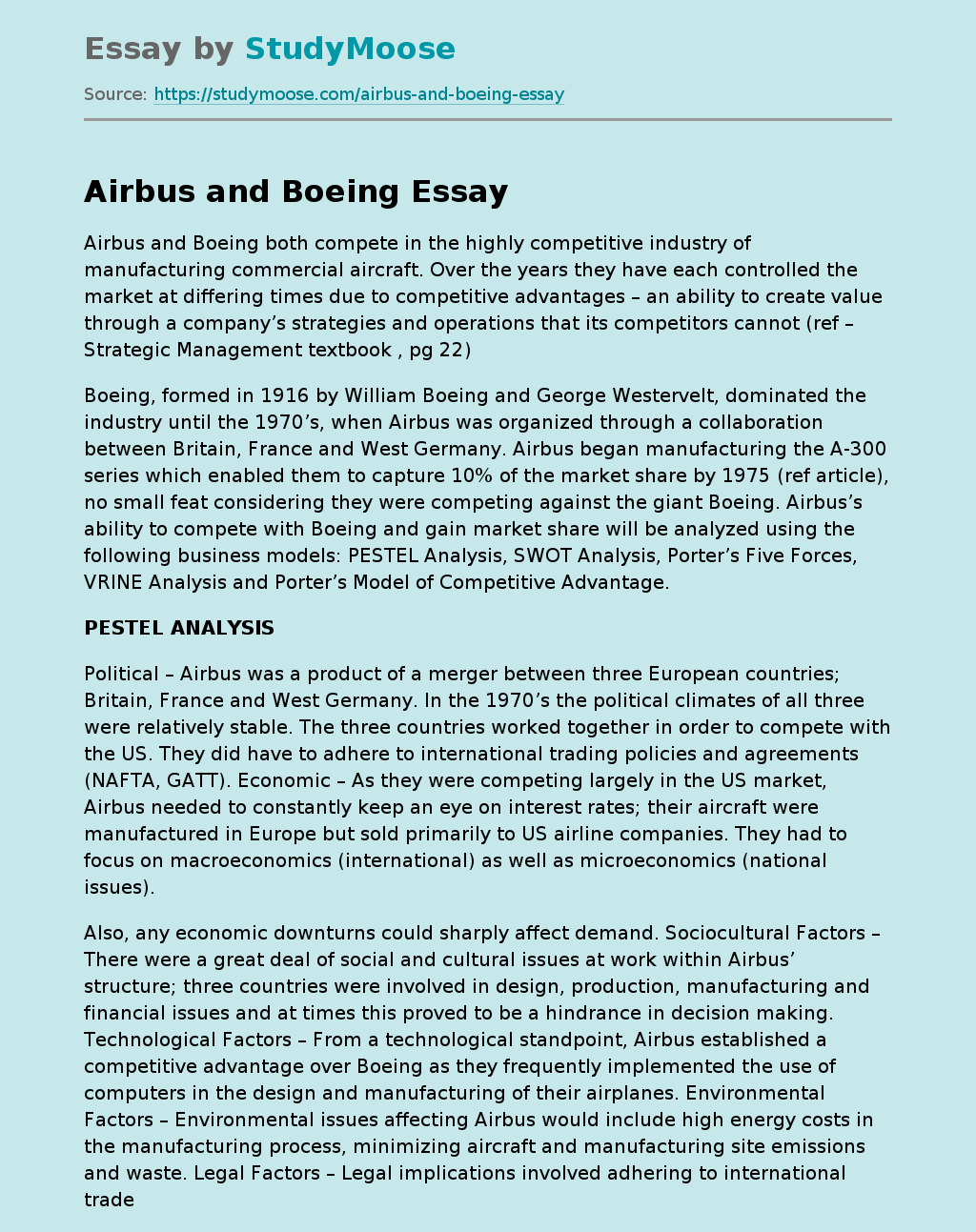