Role of NCC in Nation Building

The word “culture” is rather difficult to define accurately and is as elusive as the term civilisation. Culture to the anthropologist refers to the sum total of the possessions of an identifiable group of people. The concept covers material as well as non-material things, the latter including language, rituals, beliefs, values, norms, practices, wisdom, knowledge, and also economic relations.

What really binds people together is their culture, the ideas, beliefs and standards they have in common. In any case, culture implies restraint over oneself, control of emotions, polished manners, refinement and consideration for others.

Don't use plagiarized sources. Get your custom essay on
“ Role of NCC in Nation Building ”
Get custom paper
NEW! smart matching with writer

The cultivation of good tastes, acceptable patterns of external behavior, deep moral sensibilities; all these are indications of culture. The cultured mind has its doors and windows open; a closed, narrow and prejudiced mind betrays lack of culture. It is culture that distinguishes man from other organic creatures. Culture is the product of human society. Each distinctive culture corresponds necessarily to a particular society.

Throughout history, India has been culturally united, even though politically it has been split up into quarrelling States and territories.

India’s past, with its variety of cultures, traditions, customs, language and religious beliefs, is in effect the common heritage of all Indians, Hindus, Muslims, Christians and others. There are diversities of course; these are bound to be in such a vast country of continental dimensions. But there is an essential unity of outlook, which one can notice from north to south and east to west. Indian society has progressed by a synthesis of the emerging contradictions.

This incorporates several Indian traditions; Our culture is the cumulative result of centuries of evolution and continuous synthesis. There have been no sudden breaks in this process. Every individual is moulded by his native country’s culture to an enormous degree. We may not recognise the shaping process, because it is gradual. It is satisfying, at least as often as it appears burdensome. Values, attitudes, and institutions are inextricably interwoven. This underlines the inter-relationship between culture and politics.

Language is the instrument through which culture may be said to be transmitted from one generation to the next. In fact, language makes the “storage” of culture possible. A national culture has emerged in recent decades, as a result of the selection of discrete items from various sections and groups in the country, and elaborating them and reinterpreting them for display on various occasions, including Independence Day and Republic Day. The national culture performs both aesthetic and political functions.

The latter functions include accommodation of various regional cultures. The literatures of various regions conform broadly to the same themes; there is sympathy, patience and understanding. The language of expression is often different, but even the root of most Indian languages is the same Sanskrit. Several new factors have emerged in post-independent India, such as adult franchise and constitutional safeguards for the weaker sections of society. All these have sharpened the politicisation of social and cultural life.

But even the intrusion of politics into this sphere has not retarded the stream of Indian culture. Indian society has not been rigid; on the contrary, it has displayed a remarkable degree of flexibility. Over the centuries, India has absorbed waves of foreign cultures. The youth of India ventured abroad and brought in fresh ideas. The joint family and the caste system have virtually crumbled, but the cultural strains have not been snapped. There is conflict between man and nature, but Indian culture has not disintegrated. Nor has the spread of education weakened it. Consequently, Indian culture is composite in character; the traditional tolerance of Indian society has been a vital factor.

Undeniably, there are differences of rigidity attained by traditions in different countries. China and India have a long history and ancient civilisations; the traditions in these two countries have been handed down, not by centuries but by the millennium. Among the systems India has inherited over the centuries is that of caste. Generally, the caste system is quoted as an example of rigid traditions that prevent reconstruction of society on modern lines, so as to conform to the needs of a technologically advanced industrial society. But sociologists affirm that even the hoary caste system is merely a manifestation of class structure, a widely recognised arrangement of productive forces in the feudal society existing at that time. Inevitably, the changing social and economic structure has modified the caste system.

The new conditions, the new social structure, the gradually changing set-up and the general enlightenment brought about by education have made the system somewhat obsolete. With the spread of knowledge, countless people have questioned the validity of the caste set-up. A few examples of protestant traditions and the work of social reformers would clarify the position. Their activities have gradually but surely brought about a cultural renaissance. Buddhism was a great movement against casteism and ritualism. Later came, the teachings of Guru Nanak, with their stress on a casteless society. Raja Rammohan Roy worked for the eradication of caste, rituals and social evils. Swami Vivekananda, the de facto founder of the Hindu monastic order, the Ramakrishna Mission, also denied the validity of the caste system. In the 20th century Mahatma Gandhi campaigned against the caste system. Though most of these social reform movements had a limited impact, they were never repudiated by the Indian people, as some movements were in the West. India has absorbed all the protestant traditions in her composite culture.

The feudal left-over have been gradually eroded, especially in urban areas where a new industrial society, with its own cultural practices, has emerged. But the talk of Indian cultural unity, though well-founded, must be tempered with certain harsh realities and strange contradictions that are becoming increasingly noticeable in society. These often create doubts in the minds of many people, whether there is such a thing as India’s cultural unity. The endless conflicts, struggles, armed riots and clashes between the various communities cannot be brushed aside as mere aberrations occurring only once in a while. They are quite frequent, and result in violent clashes because of the basic differences in approach and the countless vested interests in certain lopsided set-up.

It is often contended that the differences and diversities which result in recurring clashes do not detract from the claim of India’s cultural unit. But this contention lose all meaning when we find that people are at each other’s throats, and indulge in unethical, uncultured, violent behavior far too often. Culture, it is said, has permeated every section of Indian society. But how can this be true of the illiterate, poverty-stricken masses that lack the basic characteristics of cultured people? Nor can it be argued that the Indians are essentially spiritual, far more so than other people, and can, therefore, claim to be cultured. How many people are truly spiritual, truthful, charitable, tolerant and considerate to others? Have we not become selfish, self-seeking, greedy, corrupt, and irreligious and do we not flout with a vengeance the teachings of our saints and sages? Again, Indian culture is said to be based on the Hindu philosophy o: life and conduct.

But lakhs of people now question the basis of Hindu philosophy and regard it as irrelevant and obsolete. Do our people have a universal outlook which is so essential for real culture? There is more and more of individualism and less and less of the spirit of service to society: both these indicate the lack of culture. Culture implies striving towards perfection and discarding all evil in the process. It also means that people have high social values. In today’s India, all social and moral values are on the decline. Can we truly claim that we try to absorb what is best in other people and in other cultures? India’s tragedy is that as the years pass we tend to imbibe the social malpractices and immoral habits that are associated with the West. True Indian culture has been eroded as a result of this trend.

The prosperity is confined to a few pockets, rural as well as urban. But the vast countryside and countless people in urban slums and shelters similar to these dirty dwellings are living in abysmal poverty. Besides poverty, there is mass illiteracy. It is pointless and even insulting, to talk of culture and cultural activity to people stricken with the specter of hunger. In many areas the soul stirring overshadows everything else. Creativity does not find a place in a country traditionally associated with the begging bowl, and with torn, tattered clothes covering famished bodies of continually exploited people. How many of us can claim to be proud of our people’s moral character, standards of honesty and general behavior? Albert Schweitzer, the well-known philosopher, described Indians as “self-negating people”.

Many impartial observers have noticed among Indians an obsessive concern with their self-interest, which indicates lack of interest in, or responsibility for, anyone else. In most of our working relationships there is indeed a negative, even destructive attitude. To the non-violent policies, for which we were once known around the world, has lately been added strains of violence, which may be described as public aggression and are violative of what the country stood for. Have these become an integral part of our national culture, ethos and character? The anti-national tendencies persist despite all the efforts of the official agencies of law and order to suppress them.

Even appeasement has not brought the requisite dividends. The country’s unity and culture are anything but safe. Countless people would agree that our unity in diversity is probably a myth. Undeniably, there is a fantastic diversity, but there is less of unity now. Our traditional tolerance, our spiritual values, our peace-loving, conciliatory nature and cultural traits seem to be disappearing. There are sections of society in certain parts of the country, in the eastern region for instance, to who all talk of an Indian nation and a distinct Indian culture and unity are anathema. The cultural unity of India is, thus, not as complete, all- pervasive and durable as our predecessors supposed.

Role of NCC in Nation Building. (2016, Apr 15). Retrieved from https://studymoose.com/role-of-ncc-in-nation-building-essay 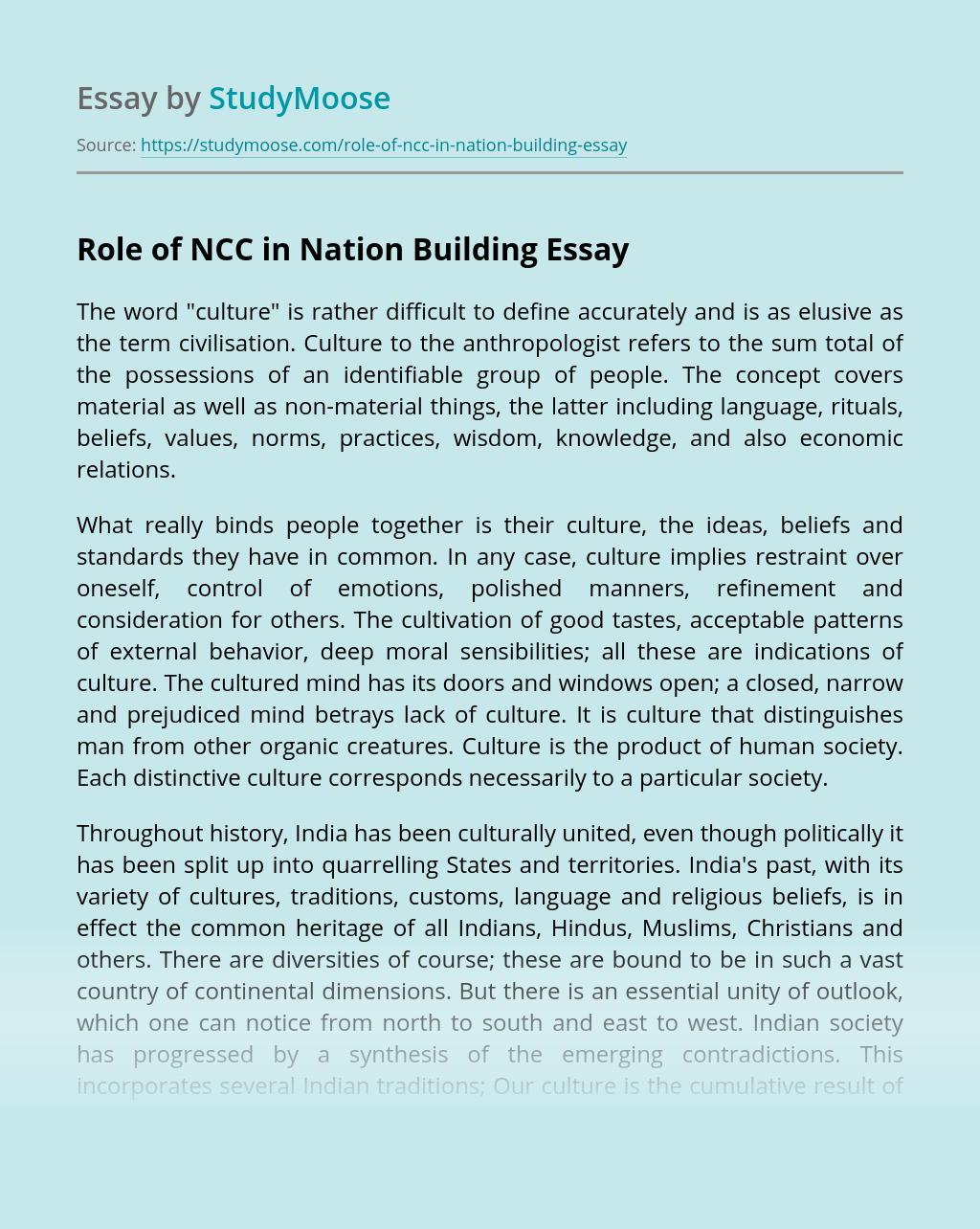