Blacks in the Revolutionary War

Don't use plagiarized sources. Get your custom essay on
“ Blacks in the Revolutionary War ”
Get custom paper
NEW! smart matching with writer

There were black loyalists, black sailors, black patriots and black regiments who fought and died in the name of Independence. It has been estimated that over 5,000 African Americans served as soldiers for the Continental army and more than 20,000 fought for the British cause. Slavery in Colonial America is noted to have begun in 1619 with the arrival of 20 African slaves on the Dutch ship named Man-of-war. The slaves made up over half the population in the colonies although they were seen more so as property instead of people.

Everyone had a reason for taking part in the war. There were factors that motivated the blacks to take part in such a battle as well. The text mentions that when it came to fighting between the Patriots on one side and their Loyalist American allies on the other, African Americans joined the side that offered freedom. Having that choice of gaining freedom in exchange for serving in the military was indeed motivation.

Other motives for blacks were the Blacks in the Revolutionary War3 desire for adventure, belief in the justice and the goals of the revolution and the possibility of receiving a bounty.

The Continental navy and The Royal Navy signed blacks into the navy because of the manpower shortages at sea. Some blacks had been captured from the royal navy and used by the Patriots on their vessels. They also served as seamen on British vessel. Slaves and free slaves served as seaman. Because so many Patriot leaders resisted employing black troops, by mid-1775, the British had taken the initiative in recruiting African Americans. Revolutionary leaders feared using blacks in the arm forces. They were afraid that the slaves who were armed would uprise against them.

In May 1775 the Massachusetts Committee of Safety put a stop to enlisting slaves in the armies of the colony. However, this did not apply to the blacks who were already serving in the army. 1775-1783 the navy recruits freed black slaves and runaway slaves. Lord Dunmore, born John Murray, was the last Royal Governor of Virginia. Because he was short of men, Dunmore issued a proclamation stating that all able bodied men to assist him in the defense of the colony, including the slaves of rebels. He promised freedom to the blacks who served. After doing so in a month he had 800 soldiers.

The purpose of his Proclamation was to declare martial law and to encourage slaves of rebels in Virginia to leave their masters and support the loyalist cause “All indentured servants, Negroes, or others…free that are able Blacks in the Revolutionary War4 and willing to bear arms…” Such an act outrage Virginians. Those that took Dunmore up on his word range between 800 and 2,000. The Virginia Congress replied to his Proclamation with the Dunmore’s wasn’t as successful as his plan out, the number of his soldiers decreased due to smallpox outbreaks.

Dunmore’s Proclamation was the first mass emancipation of slaves in American history. After the war ended, over 5,000 blacks left for Jamaica or St. Augustine because they were the property of loyalist that they would never gain their freedom from slavery. By 1786, many were back in bondage. There were those who were Patriots’ slaves but sided with the British were promised their freedom and was granted such. Many black patriots found that the post war military held no rewards for them. So many men served in the armed forces which meant that their wives were left behind and had to take on their husband roles.

Their lives changed a great deal during the Revolutionary War. The women, who could, serve the Colonial military forces and interacted with the male soldiers in camp. They were usually the wives and daughters of the male soldiers. The cooked, did laundry and cared for those that were sick. There also some who fought in the military battles: Margaret Cochran Corbin and Captain Molly. Molloy’s husband had taught her how to load and fire cannons. Black women, many of whom were slaves, served both Americans and the British in the capacity of nurses, laundresses and cooks.

Blacks in the Revolutionary War. (2018, Oct 22). Retrieved from http://studymoose.com/blacks-in-the-revolutionary-war-essay 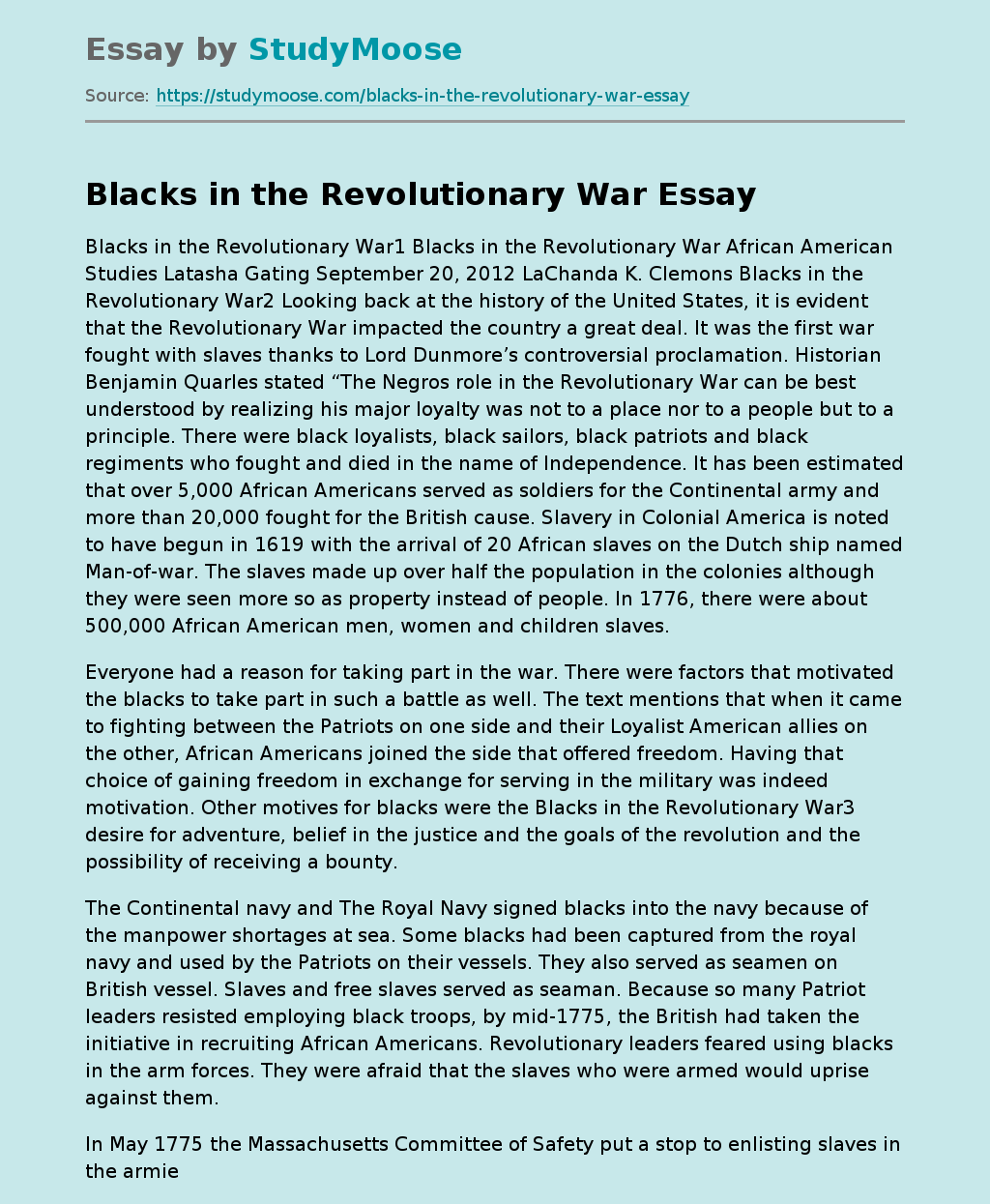