Black like me is a book were the author is the star of the show. John Griffin, a white man, makes the decision to experience racial injustice first hand during the civil rights movement. In order to do so, he undergoes a treatment that makes his skin temporarily darker. Fully committed to report the truth he set out in uncharted territory and moved to the deep south and started his life as an African American. Although Griffin had an idea of what he is getting into, he wasn’t prepared for what he experienced.

Don't use plagiarized sources. Get your custom essay on
“ Black Like Me by John Griffin ”
Get custom paper
NEW! smart matching with writer

His first few days as a black man were very traumatic. Eventually he began to go back and forth between races. All in all, he came to the conclusion that the way African Americans were treated was disgusting. After he writes about his experiences, he stops the skin treatments and returns home. Things don’t return to normal though. His work had been published in 1961, and while some praised him for his work, others threatened him.

The threats got so bad, he eventually moved his family to Mexico. He continued to preach for equality between the races, fearing if the wasn’t change soon, hell would break loose.

Griffins work was turned into a movie, three years after it was published, in 1964. There were some major differences between the book and the film. People who have read the book say the movie wasn’t quite as moving or as heart wrenching. For starters, the film jumps back and forth from the very beginning, as if we are looking at flashbacks of the storyline.

Other differences between the film and the book are certain scenes. Some scenes happen out of order from the book, some are altered, and some are simply erased from the film all together. The film opens with a scene that Griffin writes about, which isn’t how the book starts. One scene from the book that had been altered was the scene were Horton as a black man was told to shave the hair off his hands. He proceeded to go to the closest bathroom only to be told he couldn’t go into that restroom; he was guided in the right direction by some other black men. However, in the film that never occurs. Horton only asks, “where is the nearest restroom?” and then the topic of conversation is changed. A scene that is completely erased from the film all together, is one where Horton has a conversation with a gentleman who owns a café where he is eating breakfast. It turns into a group discussion between everyone in the café. But, In the film that never occurs.

Another important distinction between the book and the movie is characters. Some names and personas are changed in the movie. One important character that has his name changed in the film is P.D. East. East is a white journalist, just like Griffin, through Griffins writings it is clear that he respects East. In the film East becomes Ed Saunders. While his name is changed, almost everything else about him remains the same in the film, as it was in the book.

Due to the changes made in the movie from the book, one can wonder why the filmmakers would do so. One reason behind the changes to the layout of the fil could be because it is a movie, and having flashbacks is a little more intriguing than a simpler approach going scene by scene. A reason behind altering some scenes could be to make the transitions easier. The books chapters are set out by days, and most of the time there are gaps between the days; which would be difficult to follow if the filmmakers hadn’t compensated for the jumps. Another explanation for the deleted scenes could be the fact that some scenes in the book lack exactment. After all, it is a movie, and movies need to keep the viewers’ attention.

All things considered, I preferred the book. I believe the movie did a great job sticking with the theme and main point of the book. However, reading Griffins experience firsthand was completely eye opening. I definitely learned more from Black like me the book version than the movie. Additionally, I’m impressed with the commitment Griffins had; to take a step back from the life he had, just to experience discrimination took immense courage. I believe this book should be in every history class. Anyone who talks about the civil rights movement should require this reading. Overall, a great book and a solid movie.

Black Like Me by John Griffin. (2021, Dec 04). Retrieved from https://studymoose.com/black-like-me-by-john-griffin-essay 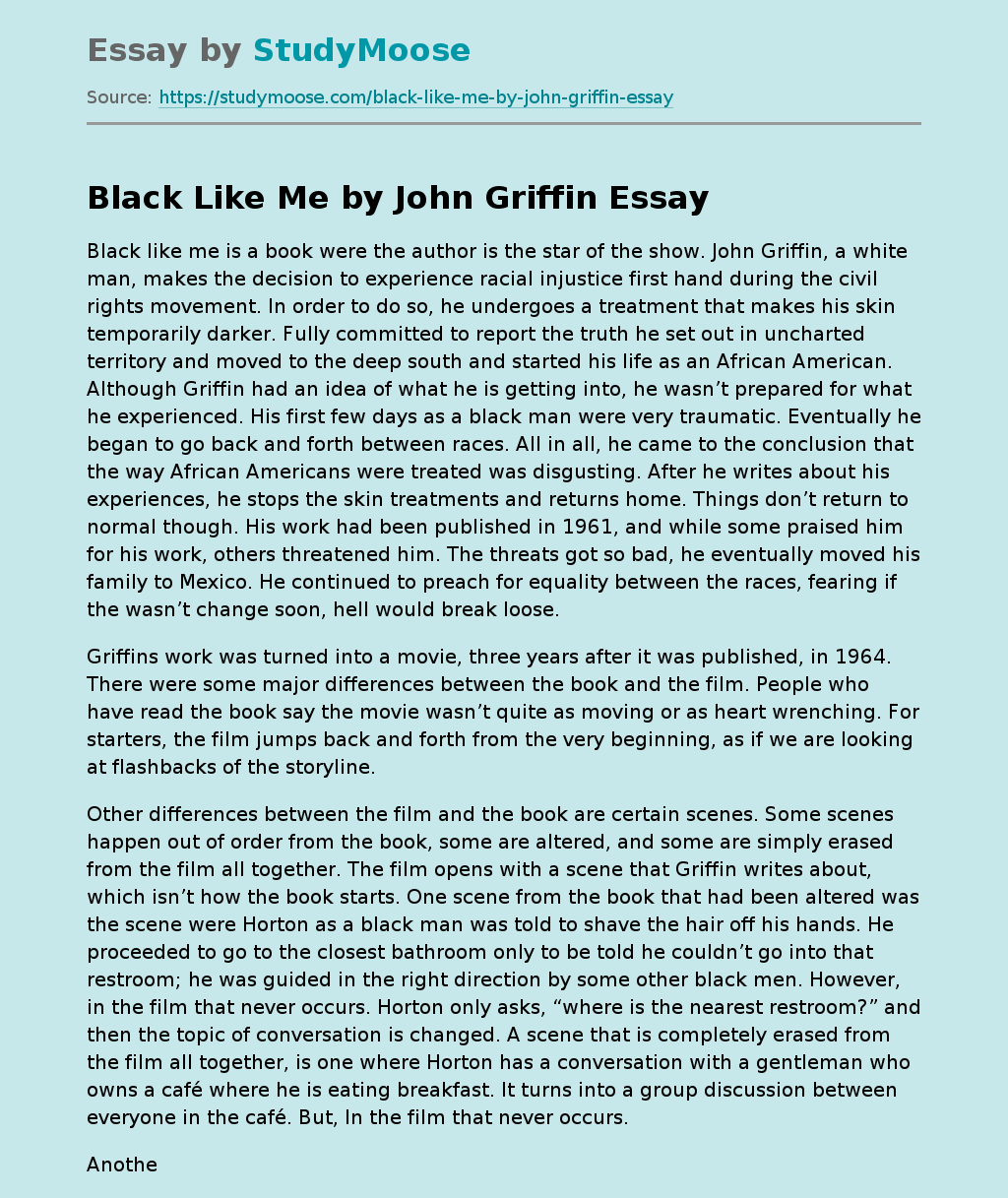