Biography and Crimes of El Chapo

El Chapo was born in the small Sinaloa town of La Tuna and is the oldest of seven children. Guzmán grew up surrounded by marijuana and poppy crops — plants that were cultivated by his father, Emilio Guzmán Bustillo. The elder Guzmán was a violent man who beat his children. El Chapo likely earned the ire of his father by trying to stop him from hitting his siblings. Whereas his father was a source of punishment, his mother Consuelo Loera served as his fountain of emotional support.

Don't use plagiarized sources. Get your custom essay on
“ Biography and Crimes of El Chapo ”
Get custom paper
NEW! smart matching with writer

She still lives in La Tuna and is said to be the only person in the world who can change her son’s mind on anything. Guzmán entered the narcotics industry at the age of 15 when, along with his cousins, he planted his own marijuana.

It was during his adolescence that he was given the nickname of “El Chapo,” a reference to his miniscule stature he was a farmer growing beans and corn when he escaped prison in 2001 he is to said to walked out in a wig a skirt and high heels As a child, Guzmán sold oranges, and dropped out of school in six grade to work with his father.

Joaquín Archivaldo Guzmán Loera was born into a poor family in the rural community of La Tuna, Badiraguato, Sinaloa, Mexico.[21][22]Sources disagree on the date of his birth, with some stating he was born on 25 December 1954,[23] while others report he was born on 4 April 1957.[24] His parents were Emilio Guzmán Bustillos and María Consuelo Loera Pérez.

[25] His paternal grandparents were Juan Guzmán and Otilia Bustillos, and his maternal grandparents were Ovidio Loera Cobret and Pomposa Pérez Uriarte. For many generations, his family lived and died at La Tuna.[26] His father was officially a cattle rancher, as were most in the area where Guzmán grew up; according to some sources, however, he may have possibly also been a gomero, a Sinaloan word for opium poppy farmer.[27] Guzmán has two younger sisters, Armida and Bernarda, and four younger brothers: Miguel Ángel, Aureliano, Arturo and Emilio.

He had three unnamed older brothers who reportedly died of natural causes when he was very young.[26] Few details are known of Guzmán’s upbringing. As a child, Guzmán sold oranges, and dropped out of school in third grade to work with his father.[17] Guzmán was regularly beaten and sometimes fled to his maternal grandmother’s house to escape such treatment. However, when he was home, Guzmán stood up to his father to protect his younger siblings from being beaten.[28][29] It is possible that Guzmán incurred his father’s wrath for trying to stop him from beating them. His mother, however, was the “foundation of [his] emotional support”.[30] As the nearest school to his home was about 60 mi (95.6 km) away, Guzmán was taught by traveling teachers during his early years, just like the rest of his brothers. The teachers stayed for a few months before moving to other areas.[29] With few opportunities for employment in his hometown, he turned to the cultivation of opium poppy, a common practice among local residents.[31] During harvest season, Guzmán and his brothers hiked the hills of Badiraguato to cut the bud of the poppy. Once the plant was stacked in kilos, his father sold the harvest to other suppliers in Culiacán and Guamúchil.[32]

He sold marijuana at commercial centers near the area while accompanied by Guzmán. His father spent most of the profits on liquor and women and often returned home with no money. Tired of his mismanagement, Guzmán, at the age of 15, cultivated his own marijuana plantation with four distant cousins (Arturo, Alfredo, Carlos, and Héctor), who lived nearby. With his first marijuana productions, Guzmán supported his family financially.[28] When he was a teenager, however, his father kicked him out of his house, and he went to live with his grandfather.[33] It was during his adolescence that Guzmán earned the nickname El Chapo, Mexican slang for “Shorty”, for his 1.68 m (5 ft., 6 in.) stature and stocky physical appearance.[34][35] Though most people in Badiraguato worked in the poppy fields of the Sierra Madre Occidental throughout most of their lives, Guzmán left his hometown in search of greater opportunities; through his uncle Pedro Avilés Pérez, one of the pioneers of Mexican drug trafficking, he left Badiraguato in his 20s and joined organized crime.

Guzmán was captured in 1993 in Guatemala, extradited and sentenced to 20 years in prison in Mexico for murder and drug trafficking.[1][17] After bribing prison guards, he was able to escape from a federal maximum-security prison in 2001.[1] He was wanted by the governments of Mexico, the United States and by INTERPOL.[18] The U.S. offered a US$5 million reward for information leading to his capture, and the Mexican government offered a reward of 30 million pesos (approximately US$2 million) for information on Guzmán.[1] Guzmán was arrested again by Mexican authorities in Mexico on February 22, 2014. He was found inside his 4th floor condo at 608 Av del Mar in the beachfront Miramar condominium in Mazatlán, Sinaloa,[19] and was captured without a gunshot being fired.

Biography and Crimes of El Chapo. (2016, Jun 14). Retrieved from https://studymoose.com/biography-and-crimes-of-el-chapo-essay 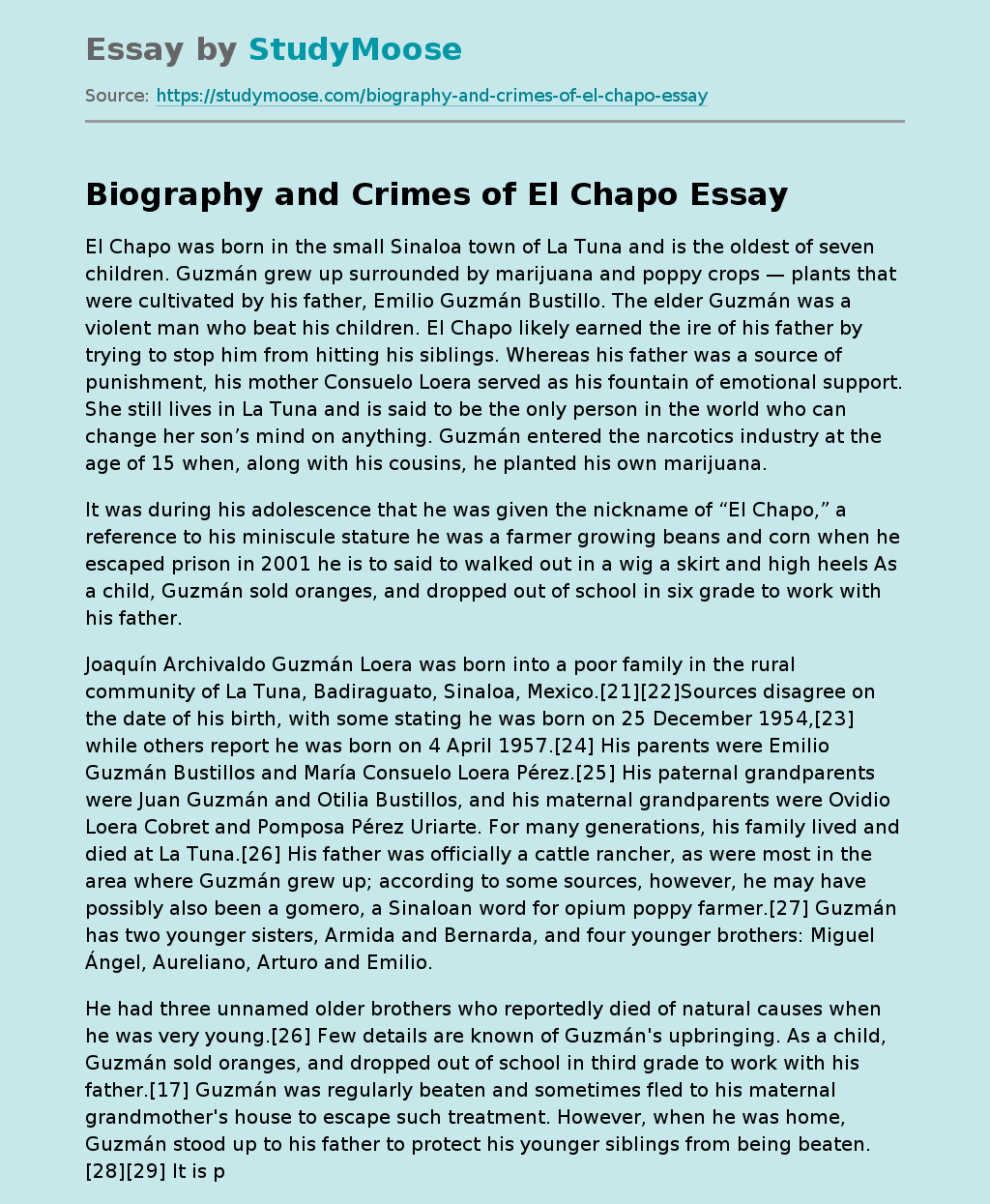