A Portrait of the Artist as Filipino

”Bitoy Camacho, an old friend of the Marasigans, pays them a visit one afternoon after many years of absence. He is greeted by the two daughters of Lorenzo Marasigan, a famous painter, who in his declining years has been living in isolation and abject poverty. Recently, he finished his latest and perhaps last major work of art, a painting he entitled Portrait of the Artist as Filipino. The sisters Paula and Candida welcome Bitoy. They reminisce about the past and the good old days.

Don't use plagiarized sources. Get your custom essay on
“ A Portrait of the Artist as Filipino ”
Get custom paper
NEW! smart matching with writer

Tony Javier, a young musician renting a room in the house, comes home from work and is surprised. Tony confides to Bitoy his frustrated efforts in convincing the sisters to sell the painting to an American client.

”In the second act, Don Lorenzo is visited by Manolo and Pepang–the older brother and sister of Candida and Paula. They plan to transfer their father to a hospital and sell the house. They have invited Don Perico, a senator to convince their younger sisters.

Don Perico appeals to both sisters to donate the painting to the government in exchange for a handsome pension that would relieve them of their burden.

The sisters remain firm and indifferent during the debate the senator is forced to examine his life realizing too late that he has betrayed his true vocation as an artist-poet. Forlorn and devastated by remorse, [the senator] bids the sisters farewell. ”Manolo and Pepang quarrel with their younger sisters [who] are forced to reveal why their father painted the picture.

They had confronted him a year before, and in pain accused him of having wasted their lives. As a reaction, he painted his last work of art and then attempted to commit suicide. ”Alone, Candida tells Paula of her frustration in job seeking. Tony Javier rushes in with news about his American client who has doubled his offer [for the painting]. In a moment of weakness, Paula abandons the house and joins Tony.

”The third act begins with Bitoy remembering the Octobers of his youth and the feast of La Naval de Manila. A group of visitors to the Marasigan home inquire about rumors that the painting and Paula have disappeared forcing Candida to admit what happened and accuses herself of masterminding the crime. Paula enters and admits to having destroyed the portrait. Crushed, Tony accuses the two women of condemning him back to poverty. He leaves cursing them. In the meanwhile, the two sisters reconcile and reaffirm their decision to remain in the house with their father. Bitoy in a monologue ends the play with a prayer deciding to dedicate his life to the preservation of Intramuros and its historical past through art and memory.”

A Portrait of the Artist as Filipino. (2016, Apr 23). Retrieved from http://studymoose.com/a-portrait-of-the-artist-as-filipino-essay 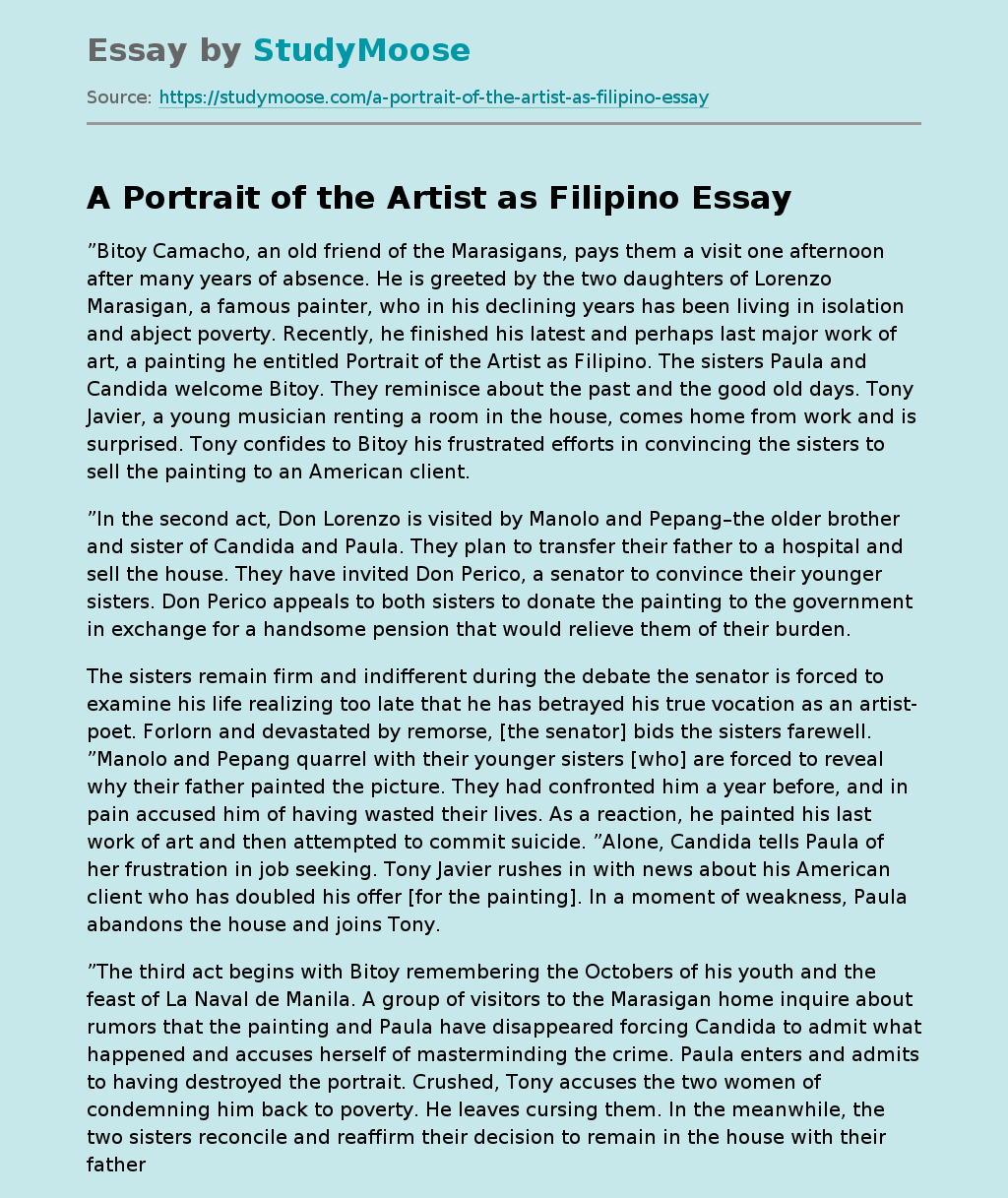